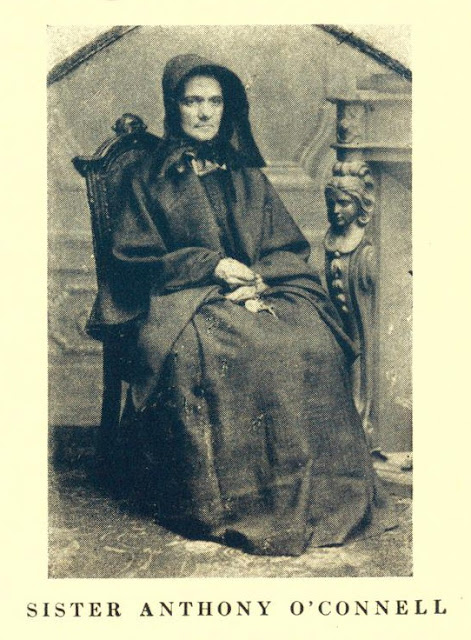 On December 8, 1897, the Feast of the Immaculate Conception, Sister Anthony O’Connell, died in her eighty-sixth year, having worn the religious habit of a Sister of Charity for sixty-three years. Synchronizing her departure with the soft and sweet harmony of the of the convent bell announcing the evening Angelus, the “Angel of the Battlefield” answered the call of the God of Battles. This happy co-incidence brought consolation to the Irish hearts about her, as there is an Irish legend which has it that those souls which depart to the ringing of the Angelus go straight to heaven. Her death brought forth expressions of regret from many military organizations, which took formal action in manifestation of their regard for this faithful nun. The William H. Lytle Post, Grand Army of the Republic, passed the following resolution of respect:

Whereas, the venerable Sister Anthony departed from this life on Wednesday afternoon, after a life of usefulness in taking care of the sick and boundless charity; and whereas, she was one of the most active nurses in the war, doing many kind, silent acts; and whereas she will be buried from St. Peter’s Cathedral Saturday, at 9 o’clock; therefore be it resolved, that in order to show our gratitude and affection for her and appreciation of her services as an Army nurse, we attend her funeral and invite all other posts to participate with us.

“In the Cathedral,” according to the Cincinnati Commercial, “the temple of the religion she loved and worked and prayed for, two veterans of the Grand Army of the Republic, bearing aloft flags of their country draped in somber black, stood sentinels at the bier. There was the procession of prelates and priests and companies of Sisters of Charity instead of the rank and file of soldiery; there were the embroidered robes and black habits in place of the Blue and the Gray; there were candles instead of camp fires; there was the chime of bells and the chanting of the choir instead of the call of trumpets and the beat of drums; there was the organ pealing instead of the musketry roll; there was the fragrance of incense instead of the smoke of the battlefield; there was the bier and the sable pall instead of the hospital stretcher; there were the whispered prayers of two thousand people on bended knees for the repose of the soul of Sister Anthony. The morning light streamed softly and dimly through the stained-glass windows, and electric lights took the place of the stars in heaven’s blue canopy, but it was the bivouac of the dead. The ministering angel to soldiers, the comfort of widows and orphans, come to do her honor, were soldiers, orphans, and widows; those who had been poor and sick and unfortunate, her greatest care in life.”

NOTE
Sister Anthony was a native of Limerick, Ireland, who, coming to America as a child, entered the Community at Emmitsburg, and, after settling in Cincinnati in 1837, was successively in charge of the orphans at St. Peter’s Orphan Asylum, St. Aloysius Asylum (1853), and St. Joseph Orphanage (1854). During the Civil War Sister Anthony played a part like that of Florence Nightingale in the Crimea. She sprang into action at once, not only in the wards of St. John’s, which was soon filled to overflowing with wounded soldiers, but on the battlefield as well.

“To the soldiers of both armies,” says Juettner, “her name had a magic ring of wonderful power. To them she was the incarnation of angelic goodness that seemed like a visitation from realms celestial. On the battlefield of Shiloh, amid a veritable ocean of blood, she performed the most revolting duties to these poor soldiers. Neither the cries of anguish of the dying nor the unbearable stench from dead bodies could check her in her ministrations. To the young soldier that lay, fatally wounded, upon that bloody ground and was thinking of a lone mother at home, Sister Anthony brought the comfort and peace of a mother’s care. In such moments, it was the instinct of the woman in her that enabled her to soothe the aching heart while relieving the pangs of physical suffering.

Then again she stood bravely and attentively at the side of George Blackman, helping him in his operative work on the deck of one of the floating hospitals of the Ohio River. Limbs were quickly amputated and consigned to a watery grave. There seemed to be no limit to Blackman’s endurance. But no matter how hard the work or how trying the scene, Sister Anthony was always at her post, her only regret being that she could not do more for her fellow-men, for her country and for her God. It was this kind of a record that has perpetuated her name beside those of the most famous commanders.”

May 25, 2011 Father Walter Elliott, C.S.P. (1842-1928): Union Army Veteran
Recent Comments
0 | Leave a Comment
Browse Our Archives
get the latest from
McNamara's Blog
Sign up for our newsletter
POPULAR AT PATHEOS Catholic
1