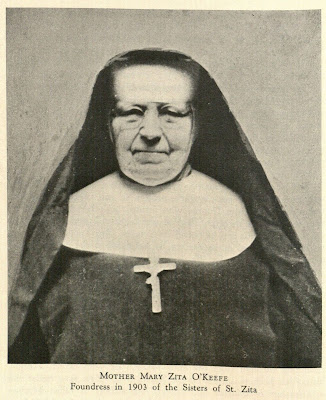 The Sisters of Reparation of the Congregation of Mary, intimately known in their home surroundings in New York City as the Sisters of St. Zita, were founded in that city in 1903.

The foundress of the Institute, Miss Ellen O’Keefe, who became in religion Mother Mary Zita, was born in County Limerick, Ireland, and emigrated to this country in 1864. As a nurse, Miss O’Keefe, moved for pity with the unfortunate women with whom she came into contact at the City Hospital, Blackwell’s Island—women whose previous records often prevented their securing employment—determined to found a home where they could find shelter, and be given opportunity for industrial work.

With her personal savings she began such a home in 1890, and was soon joined in her charitable project by two friends, Mary Finnegan and Katherine Dunne, who formed with her in 1903, with archiepiscopal approbation, the first community of Sisters of St. Zita, whose object is the care of friendless women. Any friendless woman, regardless of creed or nationality, is welcomed at the houses of the sisters, and may stay for life or go when she pleases.

In the spacious building of St. Zita’s House, which for many years has been established at 143 West 14th Street, in New York City, the Community labors and supervises the work of more than two hundred women, engaged, as a source of income for the home, in institutional and ecclesiastical laundry work, and the replenishing of Church supplies on the ocean liners. The generosity of friends also aids in the support of the establishment.

With the completion of a new building on West 15th Street, extending through from the same location on 14th Street, a night refuge has been re-opened by the Sisters of St. Zita, now under the superiorship of Mother M. Francis, succeeding in office Mother M. Magdalen, the direct successor of the foundress, Mother Mary Zita.

Aiding Mother M. Francis in carrying on the work of the Institute, an auxiliary has been organized, composed of prominent Catholic women who co-operate generously with one of New York’s smaller religious communities in the maintenance of what is recognized as one of the city’s greatest charities.

Elinor Tong Dehey, Religious Orders of Women in the United States: Accounts of Their Origins, Works and Most Important Institutions (Hammond, IN: W.B. Conkey Co., 1930), 749-750.

September 25, 2011 Catholic Poetry
Recent Comments
0 | Leave a Comment
"Wow! I didn't know about that Statement from the US Bishops. The fact that they ..."
Florence Ziegler “It’s About Time They Got Here”:  Catholics ..."
"Very interesting. Why did the Jesuits change the name of the school from a saint's ..."
Kristin Nealon Wilson Ocds Who’s Buried in Catholic Cemeteries?
"It is a joy to that you are back blogging. Thanks for the reference to ..."
Joe A Church Historian’s First Communion
"Thank you for all your enjoyable, informative posts on Church history. I agree that the ..."
Kathleen Brady Looking at the Scandals– A Church ..."
Browse Our Archives
get the latest from
Catholic
Sign up for our newsletter
POPULAR AT PATHEOS Catholic
1