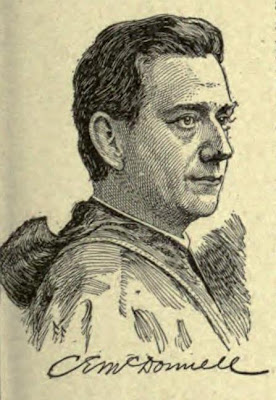 McDONNELL, Charles Edward, R. C. Bishop of Brooklyn, was born in New York City. February 1, 1854. He was educated at De LaSalle Institute and St. Francis Xavier College, New York City, completing his study of theology in the American College at Rome, Italy, 1872-78. Before his return to America the degree of D.D. [Doctor of Divinity] was conferred upon him, and he was ordained a priest by Bishop Chatard, May I5, 1878. His subsequent training in canon law and church ceremonial was obtained in the households of Cardinal McCloskey and Archbishop Corrigan, for the latter of whom he was acting as private secretary at the time of his appointment to the vacant see of Long Island. During 1878 he was assistant in St. Mary’s Church, New York City, and in the following year was transferred to St. Patrick’s Cathedral, New York. During 1879-84 he served as master of ceremonies in the New York cathedral and in 1890 was appointed spiritual director to the Catholic Club. After the death of the Rt. Rev. John Loughlin in 1891 he was appointed Bishop of Brooklyn, and was consecrated by Archbishop Corrigan. Apr. 25, 1892. His first official act was the dedication of the new St. Augustine Church, on May 15, 1892, and on the Wednesday following he administered the sacrament of confirmation to 600 persons at the Church of the Sacred Heart, in Clermont avenue. Brooklyn. Under his administration many new churches have been founded. In 1896 he invited the Benedictine fathers of the Bahama islands to establish themselves in the diocese of Long Island, and a band of this order under the Rev. Gerard Spielmann settled at Farmingdale and secured a mansion with four acres of land in the heart of the village for their monastery, church and school, which was dedicated July 4, 1898, by Bishop McDonnell. The diocese has grown perceptibly under his direction, and now includes (1904) 3 colleges for boys, 15 academies and select schools, 145 churches, and a population of about 500,000 Catholics. Dr. McDonnell has greatly encouraged the religious order of the Redemptorists, and under his patronage the Brooklyn foundation of the Congregation of the Most Holy Redeemer was formally established on Apr. 2, 1893. He is a man of simple tastes and quiet demeanor.

November 20, 2011 Catholic Poetry
Recent Comments
0 | Leave a Comment
"Thank you for all your enjoyable, informative posts on Church history. I agree that the ..."
Kathleen Brady Looking at the Scandals– A Church ..."
"Such laws might have done Ireland some good, in the case of the Magdelenes. The ..."
HematitePersuasion “A Million Foreigners, Most of Them ..."
"sounds like a total waste of time"
kyuss Holy Name Rally at Ebbets Field ..."
"This is a marvelous joining of three important Brooklynites who happened to have gone to ..."
Joe Three Giants of Brooklyn Catholicism
Browse Our Archives
Follow Us!