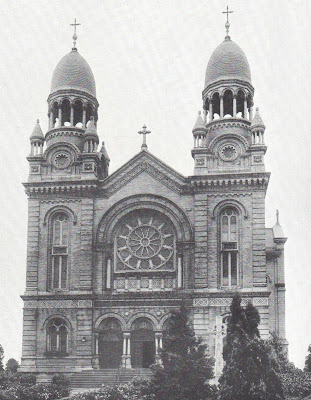 The earliest indication of a parish being erected in Westchester is the existence of a deed to a plot of land executed in favor of Bishop DuBois of New York, on December 2, 1835. This piece of land, 125 feet by 26 feet, is situated about two miles north of Fort Schuyler, and cost $160. A condition was made that a church or school, or both, should be erected on said plot within a year. None, however, was erected. Seven years later, in 1842, Bishop Hughes bought the acre of land on which St. Raymond’s Church stands, and in 1847 another adjoining acre. In 1840 the Seminary of St. John’s, Fordham, was opened, Rev. Felix Vilanis being Superior. In 1842 Father Vilanis was appointed to attend to Westchester and the villages along the Sound. He built St. Raymond’s Church on the corner of West Farms Road and Green Lane, and had it dedicated on August 31, 1845. He was succeeded by Father Higgins, who remained about a year and a half, and, his health failing, went to Ireland, where after a short time he died. Father Higgins was succeeded by: Revs. William O’Reilly, brother of the second Bishop of Hartford, afterwards rector of Our Lady of the Isle, Newport, R.I., and Vicar General of the Diocese of Hartford; Eugene MeGuire, who remained until 1853, when he was sent to St. Mary’s Church, Rondout; Richard Kien, who died on January 9, 1854; Michael O’Reilly (February 4, 1854); I. A. Kensella (July 14, 1857 to January 6, 1875), who left in his will $1000 for every year he was pastor of the parish, to help to erect the new church; Michael B. McEvoy (appointed in February, 1875), who bought the Underbill farm on Throgg’s Neck, now known as St. Raymond’s Cemetery, and had it consecrated for burial purposes; Charles F. O’Keeffe (1885-88); and Monsignor Edward McKenna, P.R. 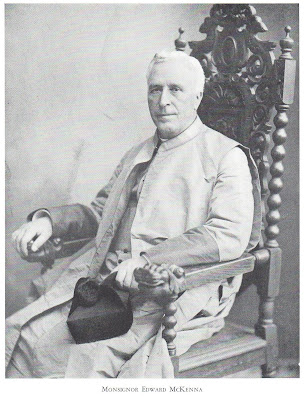 Monsignor McKenna was born on July 18, 1843, in the parish of Truagh, County Monaghan, Ireland. He studied at St. McCartan’s College, Monaghan, and at the Grand Seminary, Montreal, where he was ordained on December 19, 1868, for the Archdiocese of New York. He was assistant for four years at St. James’, New York; then locum tenens at St. Mary’s, Yonkers, and afterwards at St. Thomas’, Cornwall, Orange County. In 1874 he was appointed to St. Peter’s, Monticello, from which he came to St. Raymond’s in 1888. In 1898 he built the beautiful’church in Westchester at a cost of about $100,000. The building was dedicated on October 23, 1898. In 1908 Cardinal Logue laid the cornerstone of the new school, which was opened in September, 1909.

The parish numbers about 4000. Its societies are: Rosary; Holy Name; Young Ladies’ Sodality; League of the Sacred Heart; St. Aloysius Sodality. Monsignor McKenna is assisted by Revs. John F. Meehan, James M. McDonnell, John F. Quinn, and Lawrence Farley. The chapels attended by the parochial clergy are those of the New York Catholic Protectory, and St. Joseph’s Deaf Mute Institute at Throgg’s Neck conducted by the Sisters of the Heart of Mary. The church property is valued approximately at $200,000.