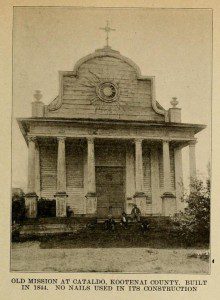 In every age and clime the Catholic Church has been a pioneer in carrying the banner of Christianity to remote and newly settled communities. The first Catholic priests to minister to the spiritual needs of the white settlers were Fathers Toussaint Mesplie and A.Z. Poulin. Upon hearing

of the large influx of miners into the Boise Basin the Most Rev. Francis N. Blanchet, Archbishop of Portland, appointed these two missionaries to look after the interests of the Catholic miners in Idaho. They were both men of fine physique, strong, hardy, and well calculated to bear the inconveniences of frontier life. Endowed with enthusiasm for their work, within six months they built four churches—St. Joseph’s, at Idaho ity; St. Thomas’, at Placerville; St. Dominic’s, at Centerville; and St. Francis’s, at Pioneer City. They were all small frame buildings; yet, the high cost of lumber and labor made it difficult to raise funds for these churches, though the miners contributed liberally, whether they were Catholic or not. On March 3, 1868, what is now the Boise Diocese was established as a vicariate-apostolic, with the Rt. Rev. Louis Lootens as the first vicar apostolic. He was consecrated at San Francisco on August 9, 1868, by Archbishop Sadoc Alemany, of San Francisco, with the title of Bishop of Castaballa. After about six months in Idaho, he left to attend the ecumenical council of the Vatican and did not return until 1871. He resigned on account of failing health in March, 1874, but did not leave Idaho until October of the following year. The second vicar-apostolic, Rt. Rev. Alphonse Joseph Glorieux, was consecrated at Baltimore, Maryland, on April 19, 1885, by Cardinal James Gibbons. He arrived at Kuna on June 12, 1885, and was escorted to Boise by Father Hartleib, Kuna at that time being the nearest railway station to Boise. Upon the erection of the vicariate-apostolic of Idaho into the bishopric of Boise  City, Bishop Glorieux became the first bishop of the new See of Boise City on August 26, 1893. And filled his office, universally beloved by all the people of the state until his death in 1917. The second bishop of Boise City, the Rt. Rev. Daniel M. Gorman, was consecrated at Dubuque, Iowa, May 1, 1918, by the Apostolic Delegate Most Rev. John M. Bonzano, and immediately assumed his duties. The Boise diocese includes the entire State of Idaho. Since the coming of Fathers Mesplie and Poulin of 1863, the Catholic Church in Idaho has grown into forty parishes, with fifty-two outlying missions, about three thousand families and fifty resident priests. The church supports fifteen parochial schools and academies. The schools at De Smet and Slickpoo are for both white and Indian children. In charitable work, such as caring for the sick and injured, the church in Idaho has followed its time-honored custom of establishing hospitals, of which there are six in the state. There are a number of sisters who are not actually nurses, but who are in charge of the administrative work of the hospitals; for example, the actual number of nurses at Pocatello is ten and at Wallace five. 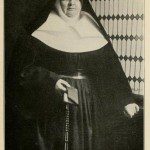