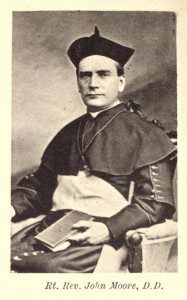 MOORE, JOHN, R.C. Bishop, was born in Castletown-Delvin, County Westmeath, Ireland, June 24, 1834. In 1848 he emigrated to Charleston, S.C., where he began classical studies. He completed his classical course in the college of Combrée, in the department of Maine-et-Loire, France, 1851-1856, finishing his philosophical studies in the Gregorian University, Rome. He studied theology in the Urban College of the Propaganda, 1856-1860, taking the degree of D.D., and was ordained priest, April 9, 1860. He was appointed assistant priest at the cathedral chapel of St. John the Baptist, Charleston, in October, 1860, and soon afterward was made rector of the cathedral. Throughout the Civil War he attended the sick of both armies in the hospitals of Charleston, and paid weekly visits to the Federal prisoners in the stockade near Florence, S.C. During the absence of Bishop Lynch in Europe he was administrator of the diocese. The cathedral was burned down in the fall of 1861, and for the greater part of the war, but especially during the bombardment of the city, there was but a remnant of the once flourishing parish left. In 1864 he was appointed rector of St. Patrick’s parish, then in a disorganized condition, and he succeeded in reconstructing the parish, enlarging the church, building a parsonage, and organizing the largest Sunday school in the city. In 1872 he was appointed vicar-general, which office he held together with the rectorship of St. Patrick’s, until he was nominated bishop of St. Augustine, as successor to Bishop Verot, who died, June 10, 1876. Dr. Moore was consecrated bishop in the pro-cathedral by Bishop Lynch, on May 13, 1877. For the purpose of the education of youth and the care of the sick he established in his diocese eight houses of the Sisters of St. Joseph, two of the Sisters of the Holy Names, and two of the Sisters of St. Benedict: and a college for young men and boys was opened in 1893 at St. Leo’s, in Pasco County, under the charge of the Benedictine Fathers. In Jacksonville he founded St. Mary’s Home, an orphanage for girls, under the care of the Sisters of St. Joseph, and instituted churches, missions and schools in other parts of the state, having in 1901, 2,500 young people under his care in various institutions. Bishop Moore died in St. Augustine, Florida, July 30, 1901.

November 27, 2012
The Sisters of the Sorrowful Mother
Next Post

November 30, 2012 Father Robert Fulton, S.J. (1826-1895), President of Boston College
Recent Comments
1 Comment | Leave a Comment
"Thank you for all your enjoyable, informative posts on Church history. I agree that the ..."
Kathleen Brady Looking at the Scandals– A Church ..."
"Such laws might have done Ireland some good, in the case of the Magdelenes. The ..."
HematitePersuasion “A Million Foreigners, Most of Them ..."
"sounds like a total waste of time"
kyuss, cannabis farmer Holy Name Rally at Ebbets Field ..."
"This is a marvelous joining of three important Brooklynites who happened to have gone to ..."
Joe Three Giants of Brooklyn Catholicism
Browse Our Archives
Follow Us!

A Look At The Watchtower aka...
The Pursuit of Holiness
Related posts from McNamara's Blog