“How the Young Colonel Died” 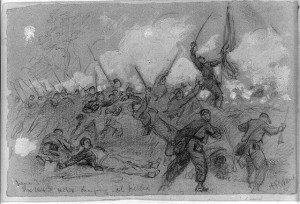 HOW THE YOUNG COLONEL DIED

You want to hear me tell you how the young Colonel died,

God help me memory will not fail on that, nor tongue be tied.

Aye, write it down and print it in your biggest type of gold.

For sure, a braver heart than his no mortal breast could hold.

T’was the second weary night of that hot and bloody June,

Through the brush along the picket we walked beneath the moon,

Behind us sixty miles of death Virginia’s thickets lay,

Before us was Cold Harbor the hell to come next day!

We talked about old Buffalo and how the girls we knew,

At the door steps with their sweethearts sat in the silver dew,

And looking at the fields below where the mist lay like a pond,

We seemed to see the long dark streets and the white lake far beyond.

Then turning sudden, “George,” he said, “ I’m glad a moon so bright

Will hold her face to mine when I be dead tomorrow night.”

We charged till full in front we felt that fiery breaker swell,

A sea of rattling muskets in a storm of grape and shell.

The Colonel led in fire and smoke, his sword would wave and shine,

And still the brave sound of his voice drew on the straggling line.

Then all at once our colors sank, I saw them reel and nod,

The Colonel jumped and took them before they touched the sod.

Another spring, and with a shout the rebs will mind it well,

He stood alone upon their works waved the old flag and fell.

As o’er the surf at Wicklow, I’ve seen the sea gull fly

His voice had sailed above the storm and sounded clear and high.

It seemed, I swear I had not heard the hellish rack and din,

Till then, all sudden on my ears, the thunder crash rushed in.

T’was vain to stand up longer, what could they do but yield,

Our broken remnant melted back across the bloody field.

I stayed to help the Colonel, and crept to where he lay.

A smile came tender o’er his face, but he motioned me away.

I bent to watch his parting lips, and shade him from the light,

“I’m torn to pieces, George,” he said, “go save yourself, good night.”

As tender as my mother’s that smile, came up and shone.

Once more upon his marble face, and the gallant soul was gone.

Three times, the same full moon arose and looked him face to face,

Before the rebels flung a truce above the cursed place.

We laid him near Cold Harbor, but the spot is bleak and bare.

I hate to think how I’m at home, and he still lying there.

I doubt his sleep will not be sweet, nor his loving spirit still,

Till he lies among the friendly dust of yonder slanting hill.

Where from the streets he loved so well might float their daily hum,

And the lake’s low roar upon the beach in quiet nights would come.

Ah, well, the town might plant his tomb with marble words to tell,

How the bravest of her blood was poured when young McMahon fell!

NOTE: The three McMahon brothers, James, Martin and John, all served in the Civil War. James, memorialized here in this poem, was killed at the Battle of Cold Harbor in 1864, commanding the 164th New York. His death was captured in a famous sketch by A.R. Waud. John commanded the 164th New York before him, but died of natural causes in 1863. Martin, a staff officer, became a Brigadier General and survived the war. The sons of an Irish immigrant, all three brothers attended St. John’s College (now Fordham University) in the 1850’s.

December 30, 2012 "St. Vincent De Paul," a Poem, 1862
Recent Comments
0 | Leave a Comment
"Wow! I didn't know about that Statement from the US Bishops. The fact that they ..."
Florence Ziegler “It’s About Time They Got Here”:  Catholics ..."
"Very interesting. Why did the Jesuits change the name of the school from a saint's ..."
Kristin Nealon Wilson Ocds Who’s Buried in Catholic Cemeteries?
"It is a joy to that you are back blogging. Thanks for the reference to ..."
Joe A Church Historian’s First Communion
"Thank you for all your enjoyable, informative posts on Church history. I agree that the ..."
Kathleen Brady Looking at the Scandals– A Church ..."
Browse Our Archives
get the latest from
McNamara's Blog
Sign up for our newsletter
POPULAR AT PATHEOS Catholic
1