One of the great things about living in New York City is that there’s always some interesting historical nugget waiting to be uncovered. I  recently discovered one at my alma mater, Fordham University in the Bronx–  a plaque dedicated to a Civil War veteran named James O’Beirne (1839-1917). As I did further research, I realized his story was worth sharing with my readers.

Approximately 150,000 Irish Americans, the overwhelming majority Catholic, fought for the Union. Many were recent immigrants who, despite prejudice and discrimination, still chose to serve. James Rowan O’Beirne was among them, but his career  was probably more interesting after the war, because he helped lead the chase for John Wilkes Booth in April 1865.

Born in Roscommon, O’Beirne’s family left Ireland during the Great Famine. Settling in Manhattan, his father worked as an attorney, and young James was sent to St. John’s College in the Bronx (now Fordham University). Started by Bishop John Hughes in 1841, the Jesuits took over five years later. A neighbor and frequent visitor to the campus was Edgar Allan Poe.

James became class valedictorian, an indication of his ability as well as his popularity. At Fordham, he became close to the three McMahon brothers, all of whom served in the Civil War. After college, he worked for his father’s law firm. (In the days before law schools were common, young lawyers generally learned on the job.)

When the Civil War broke out in 1861, James enlisted. He soon became an officer in the 37th New York Infantry, known as “the Irish Rifles.” During the 1862 Peninsula Campaign, as General George McClellan tried to capture Richmond, Captain O’Beirne was decorated for his actions at the Battle of Fair Oaks. (At that time the army only one had one decoration, the Medal of Honor.)

The regimental chaplain was his former prefect (dean of students) at Fordham, the French-born Jesuit Peter Tissot (1823-1875). O’Beirne later recalled: “He was one of those whom we dreaded yet admired during our college days… He was equally expert at hand-ball, and as a Chaplain, and I must say a soldier, having had three horses killed under him in battle with our regiment.” For a brief time, Tissot was a Confederate prisoner. In January 1865, he was named president of Fordham.

At the Battle of Chancellorsville in May 1863, O’Beirne was wounded three times, effectively ending his field service. He finished the war as Provost Marshal of Washington, D.C., in charge of the military police. After Lincoln’s assassination, Major O’Beirne was charged with pursuing and capturing Booth.  It was Colonel Lafayette Baker, with troopers from the 16th New York Cavalry, who actually cornered Booth in Virginia.

O’Beirne was not present, as he was pursuing a separate trail in Maryland. This is one of the reasons why he is not better known today. Still, Irish American historian Bill O’Neill writes:

O’Beirne had been an ace in capturing Booth. As he ran down the conspirators and their accomplices and developed the intelligence and kept Stanton informed with the intelligence that allowed Baker to reap the glory of capturing the murderer of President Lincoln, he set the stage for the conclusion of one darkest episodes of the tragic war that settled the original sentiment of the country “conceived in liberty.”

For his wartime service, and particularly for his role in capturing Booth, O’Beirne was named a Brigadier General. His postwar career was successful, as a journalist and public servant. He worked at Ellis Island and was Commissioner of Charities for the City of New York. On February 17, 1917, He died in Harlem at his home on West 117th Street. He is buried with his family at Calvary Cemetery in Queens. The Fordham Monthly commented on his passing:

To the students of Fordham his life will read its lessons: faithful in all things, loyal to the extreme, patriotic, charitable, prayerful, constant to all the teachings of his Church, a man, every inch a man… Oh! How he loved Fordham and how he loved his Church!

(The drawing of General O’Beirne is by Pat McNamara.)

May 14, 2020
Prayer and Action: The Forgotten History of the Liturgical Movement
Next Post 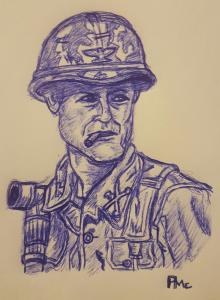