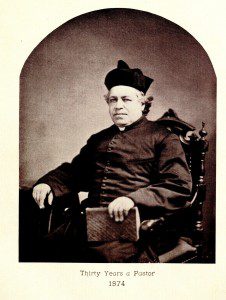 THE PRESIDENT’S MURDER— UNIVERSAL GRIEF OF THE PEOPLE— MOURNING THROUGHOUT THE CITY— THE DAY IN THE CHURCHES (The Brooklyn Times, April 17, 1865)

At Sts. Peter and Paul’s Yesterday

That yesterday could have passed without proper notice by Father Malone of its solemnity in relation to the American people was of course impossible. That he would fittingly denounce this newest expression of rebellion the assassination of Abraham Lincoln we knew. That the members of his congregation would be stimulated by him to a more profound appreciation of their duties as citizens in view of this most calamitous dispensation we knew also. Our space will not admit of more than the merest synopsis of his two discourses yesterday, discourses worthy of his head and heart worthy of, and flowing naturally from, his manhood and his exalted estimate of his citizenship.

At the nine o’clock mass intended for the younger members of the congregation, he said: “I know that it is not necessary that I should ask you to join with me in the general grief which afflicts and shrouds the nation. You have done that already. I know that your manhood has revolted at this assassination and that your patriotism and loyalty have been more than far reaching enough to grasp the fact that the assassin aimed not alone at the life of Abraham Lincoln, but at the life of the nation that the crime which prostrated our President was in its moral aspects a crime against every man worthy the enjoyment, the dignity, or the protection of American citizenship. Young men, I feel that I could utter nothing today in respect to this great sorrow of the American people that would not find a responsive echo in your hearts. And in speaking to you now it is that the sentiment of the Catholic body here may find authorized expression, that it may be known that you as citizens rising above the political prejudices and asperities of the past, have only the knowledge that the President of the United States has been murdered and that the nation has been stricken. I ask you to mark well the man who, calling himself a Catholic, shall dare to speak approvingly of this assassination, lest he shall bring disgrace upon us all. I ask you to mark well the man who to day has no voice for mourning. I need not ask you to be in the future as in the past faithful and loyal to this great Republic. You will be. And on this day sacred to us Catholics as the festival of the resurrection of our Redeemer, while our prayers of thanksgiving for that event go heavenward, let us not forget our humiliation and sorrow. Pray that the life and integrity of the nation be preserved, pray that the constituted authority of the nation may pass through this trying ordeal unharmed, and that this rebellion may speedily be destroyed.”

After communion at the Grand High Mass of the day, Father Malone addressed the audience which filled to repletion every seat and aisle. He said: “Catholics, we join our tears to day with those of the nation. As citizens and as representatives of the great Catholic body, we are bowed down by this great, this fearful calamity, that has befallen us. Abraham Lincoln, the wise, the just, and Christian Magistrate, has been assassinated. But the event has a deeper significance. It is not that Abraham Lincoln has thus been murdered; it is more it is the President of the United States, the representative of a nation of freemen, the head and chosen of its people. We mourn to day for the Christian patriot gone from us, but we stand appalled and horror stricken at the murder of a magistrate whose heart was so filled with Christian charity and forgiveness for those who had, forgetting their allegiance, taken arms against the most humane government on earth, against their country. My friends, take up this new burden of woe as befits you. Pray today for the salvation of this nation now laboring under this dreadful affliction. Pray for it every day. The nation needs all your prayers. Pray that those in authority may have the Divine guidance and protection in the trying situation upon which they are entering.” Father Malone continued in a strain thrillingly eloquent and beautiful, laboring all the time under an emotion too great to be concealed and the sympathetic influence of which speedily communicated itself to his audience.

NOTE: Born in Ireland, Sylvester Malone (1821-1899) founded SS. Peter and Paul soon after his ordination in 1844. He served as pastor there for 55 years until his death in 1899. He was a strong supporter of abolition, a sentiment not too common among Catholics in those days. In the days when ecumenism was suspect, he numbered close friends among Brooklyn’s Protestant and Jewish communities. At the time of his death, he was eulogized as a “friend to mankind.”

December 17, 2012 New York’s First Catholic Mayor: William Russell Grace (1832-1904)
Recent Comments
0 | Leave a Comment
"Wow! I didn't know about that Statement from the US Bishops. The fact that they ..."
Florence Ziegler “It’s About Time They Got Here”:  Catholics ..."
"Very interesting. Why did the Jesuits change the name of the school from a saint's ..."
Kristin Nealon Wilson Ocds Who’s Buried in Catholic Cemeteries?
"It is a joy to that you are back blogging. Thanks for the reference to ..."
Joe A Church Historian’s First Communion
"Thank you for all your enjoyable, informative posts on Church history. I agree that the ..."
Kathleen Brady Looking at the Scandals– A Church ..."
Browse Our Archives
get the latest from
Catholic
Sign up for our newsletter
POPULAR AT PATHEOS Catholic
1