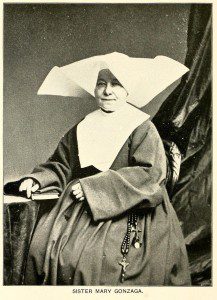 Born Mary Agnes Grace in 1812, Sister Mary Gonzaga, S.C., was in charge of the Satterlee Hospital in Philadelphia during the Civil War, when she helped tend many casualties from the Battle of Gettysburg.  The sermon at her 1897 funeral Mass was delivered by Father John Scully, S. J., Rector of St. Joseph’s Church, Philadelphia:

“St. Paul tells us in his first letter to the Corinthians that the wisdom of this world is foolishness with God, and in order that God may show to us that this is so the same Apostle tells us that the base, the lowly of this world and the contemptible hath God chosen and the things that are not in order to confound the things that are. How true in all ages have been these inspired words of the Apostle! How true to-day. This foolishness, this wisdom of the world, so foolish in the eyes of God, differs in degree and kind in different ages. In our age it shows itself in the attempt to divide human philanthropy and brotherly love from religion. Take the intellect and culture of this great city in which we live, and what does it lay down as law, except it be that mankind must practice altruism, as they call it, brotherly love, the civic virtue by which alone society  among men can be made possible, yet not one word about the essential basis which even the modern pagan sees is necessary. When talking about our rights they say nothing of the rights of God, and when talking of our obligations to one another they say nothing of our obligations to God, without which nothing can rest on a solid basis.

The wisdom of the world is foolishness. The lowly are chosen by God to confound the worldly wise. In the days of old God raised David from the shepherd of a flock to be the ruler of His people. Christ chose the poor fishermen to be His Apostles. He called St. Vincent de Paul from the lowly occupation of a shepherd to be a wonder-worker, a marvel, a propagator of charity, not only in his own days, but up to the present time. How many millions of dollars are spent in the spirit of modern philanthropy? For education, in order to raise men up as they think, to give men a chance in life. Because it is divided from religion it falls. The late Mr. Vaux said on what was perhaps his last official visit to the penitentiary : ‘When I first came here I found the children of the poor and the ignorant. Now I find my own schoolmates.’ Thus are spent millions in charity, or rather in almsgiving, for It is not worthy to be called charity. What is the result. It puffs up one with pride and another with envy.

The reason why the thing is done differently is the motive under the acts of thousands and tens of thou- sands who have given up their lives to works of charity. Have you ever heard of a soldier wishing to become a member of a church to which a trained nurse belonged? How different when the motive is that of Jesus Christ. It is the experience of thousands who beg to be allowed to die in that religion of the devoted Sisters who attended them, and it was this that caused a bishop to receive a petition from a remote part of the diocese for a priest to be sent there and a church built. He replied that not only was he ignorant that so many Catholics were there, but that there was even one Catholic. The answer was, ‘There are no Catholics here yet, but we are men who were attended by the Sisters and we want to be of the religion of the Sisters.’ The base, ignoble and contemptible things of this world has God chosen for His work.

What is more foolish in the eyes of the world; what is more despised and held in contempt by the intellectual and the cultured than poverty? Yet the Sisters are bound by vows of poverty to be as poor as Christ, to live a life of dependence, depending on one another for their very food and raiment. What more foolish in the eyes of the world than that! As the wise man has said, they are a parable of reproach, looked on with derision. What is more foolish, more base, more spiritless, more contemptible than to find women, ladies, willingly binding themselves, not by impulse, but by vocation, not as a mere whim, but perpetually to live by rule, doing that to which no man ever yet got accustomed, to purify their acts to make them meritorious in the sight of God? And obedience! The world hates and loathes obedience, yet our Divine Lord was obedient even unto death, the death of the cross.

What is the result of all the so-called charity and philanthropy? Nothing lasting. Search the hearts of thousands of men, women and children who have been benefited by the Sisters and you will find there the love of God. Such was the life of the devoted woman who spent 70 years doing good. Many philanthropists have monuments raised to them and are looked upon as public benefactors and honored as such. Take him or her who was greatest among them, or all of them together, what are all compared with a life such as hers, spent in the care of the poor, sick and needy? One long life doing good. A life not only an imitation of Jesus Christ in its acts, but what is more necessary and more difficult, a life in imitation of His motives. The world looks in reproach upon such a life. How many times has she been sneered at on the street in her poor dress and strange bonnet!

How often has the world looked with contempt on her that served the Lord so faithfully. How He loved that soul that did as He did and for the same reason. All I have said could be said of almost any other Sister of Charity, but of her, who lived for 70 years in religion, how much could be said those only can know who lived with her and knew her and loved her the more they knew her. Of how few can this be said to have combined in one and the same person the power of execution, the power of government, and at the same time the spirit of kindness and of great-heartedness which does not make commands ever necessary. Without emotion, without anger. No one ever saw that kindly face ruffled. This is rare in the world yes, even rare in the religious life. To speak of her life and to realize that thousands and tens of thousands of orphans have had her care, many becoming mothers of families and bringing up their children influenced by her example. To realize her hard work in the military hospital, to think of the thousands and tens of thousands dealt with directly by her or indirectly through her as superioress.

What a world of well-doing! Seventy years in religion ; 85 years spent in the serving of Christ. What a wonderful crown is won by her whose dead body is lying here ! Seventy years a member of the community whose very name is held even by the enemies of her faith as a synonym of all that is good in humanity something which raises humanity and brings it close to God. Now the reign of sorrow and desolation has passed away. She has gone forth from the scene of her labor to her rest. She has gone into the sight of Jesus Christ, whom in life she made her Friend. Not to meet the severe face of a Judge, but the smiling countenance of a dear friend. Who would recall her? Not those who loved her most, who lived with her in community; not those who were the recipients of her bounty. What so glorious as a death such as hers after 70 years in God’s service. Says St. Hilary, ‘Shall I fear to die after I have served my Lord for 70 years?’ So died she, because she knew the good Master she served. As theologians tell us, God makes known to his saints the needs of those whom they have left behind. ‘Thou who knowest the needs of thy children be their advocate and pattern now as ever in life. Be unto us a mother and pray for us that we may go forth as thou hast from this valley of affliction and tears to the sun- shine of God the Father, to live forever with His Son, our Lord, Jesus Christ.”

May 27, 2013 James Longstreet (1821-1904): Confederate General, Catholic Convert
Recent Comments
0 | Leave a Comment
"Wow! I didn't know about that Statement from the US Bishops. The fact that they ..."
Florence Ziegler “It’s About Time They Got Here”:  Catholics ..."
"Very interesting. Why did the Jesuits change the name of the school from a saint's ..."
Kristin Nealon Wilson Ocds Who’s Buried in Catholic Cemeteries?
"It is a joy to that you are back blogging. Thanks for the reference to ..."
Joe A Church Historian’s First Communion
"Thank you for all your enjoyable, informative posts on Church history. I agree that the ..."
Kathleen Brady Looking at the Scandals– A Church ..."
Browse Our Archives
get the latest from
McNamara's Blog
Sign up for our newsletter
POPULAR AT PATHEOS Catholic
1