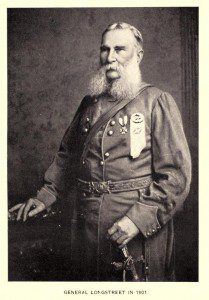 Soldier and Catholic convert. Born 8 January, 1821, at Edgefield, South Carolina, U.S.A.; died at Gainesville, Georgia, 2 January, 1904. In 1831 he moved to Alabama with his parents, and was thence appointed to the U.S. Military Academy at West Point, where he graduated in 1842. For his services in the Mexican War he was brevetted major and in 1852 was commissioned captain.

At the outbreak of the Civil War he resigned his commission in June, 1861, and entered the Confederate service, in which he afterwards attained the distinction of being one of its greatest fighters and of winning the unbounded confidence and affection of his soldiers. He received at once the rank of brigadier general, and participated with distinction in the first battle of Bull Run, after which he was made a major general in 1862. At Antietam (17 September, 1862) he commanded the right wing of Lee’s army, and with the rank of lieutenant general he was at the head of a corps at Gettysburg (2-3 July, 1863). In the battle of the Wilderness on 6 May, 1864, he was severely wounded, but resumed his command during the siege of Petersburg.

At the close of the war he engaged in business in New Orleans, and accepted the political situation, becoming a Republican in politics. President Grant appointed him surveyor of customs at New Orleans, and later he was made supervisor of internal revenue and postmaster. In 1875 he removed to Georgia, and in 1880-81 was sent as U.S. Minister to Turkey. In 1898 he was appointed U.S. railway commissioner. He left a valuable chapter of war history in From Manasses to Appomattox (Philadelphia, 1904). He became a Catholic in New Orleans, 7 March, 1877.

May 28, 2013 The Convert Brothers: General and Bishop Rosecrans
Recent Comments
0 | Leave a Comment
Browse Our Archives
get the latest from
McNamara's Blog
Sign up for our newsletter
POPULAR AT PATHEOS Catholic
1