The Convert Brothers: General and Bishop Rosecrans May 28, 2013 Pat McNamara 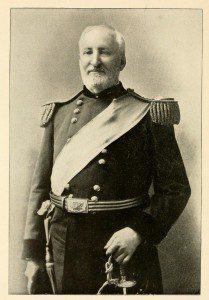 Born at Kingston, Ohio, 6 Sept., 1819; died near Redondo, California 11 March, 1898. The family came originally from Holland and settled in Pennsylvania, moving thence to Ohio.His mother was a daughter of Samuel Hopkins, a soldier of the Revolution and one of the signers of the Declaration of Independence. He graduated at the U. S. Military Academy, West Point, in July 1842, and after a brief service in the engineer corps returned to the Academy as a professor, remaining there until 1847. It was during this period that he became a Catholic. In 1854 he resigned from the army, but at the breaking out of the Civil War he was made a colonel of volunteers and, in June, 1861, a brigadier-general of regulars. During the succeeding years he held various important commands in West Virginia, Mississippi and Tennessee, until 19 and 20 Sept., 1863, when he was defeated by Gen. Bragg, at the battle of Chickamauga. Then after a short period of service in the department of Missouri he was relieved of all command. Up to this he had been uniformly successful as a good fighter and military strategist. At the close of the war he resigned from the army and, in 1868, served as U. S. Minister to Mexico, where from 1869 to 1881 he devoted himself to railroad and industrial enterprises. He was elected to Congress as a Democrat, in 1880, and again in 1882. From 1885 to 1893 he was registrar of the U. S. Treasury. In 1889 Congress restored him to the rank and pay of a brigadier general of the regular army on the retired list.

His brother, Sylvester Horton Rosecrans, first Bishop of Columbus, was also a convert. Born at Homer, Ohio 5 Feb., 1827, he was sent to Kenyon College, the leading Episcopalian institution of the state. While there in 1845 he received a letter from his brother William, then a professor at West Point, announcing his conversion to the Catholic Faith. It so impressed him that he also sought instruction and became a Catholic. He then went to St. John’s College, Fordham, New York, graduating there in 1846. Electing to study for the priesthood he was sent by the Bishop of Cincinnati as a student to the College of  Propaganda, Rome, where he was ordained priest in 1852. Returning to Cincinnati he officiated at St. Thomas’s church, and was a professor in the diocesan seminary. In 1859 a college was opened in connection with the seminary and he was made its president. In 1862 he was consecrated titular Bishop of Pompeiopolis and Auxiliary of Cincinnati. When the Diocese of Columbus was created, 3 March, 1868, he was transferred to that see as its first bishop and died there 21 October, 1878. During his residence in Cincinnati he was a frequent editorial contributor to the “Catholic Telegraph”.

May 29, 2013 The Poet of the Confederacy: Father Abram J. Ryan (1839-1886)
Recent Comments
0 | Leave a Comment
"Wow! I didn't know about that Statement from the US Bishops. The fact that they ..."
Florence Ziegler “It’s About Time They Got Here”:  Catholics ..."
"Very interesting. Why did the Jesuits change the name of the school from a saint's ..."
Kristin Nealon Wilson Ocds Who’s Buried in Catholic Cemeteries?
"It is a joy to that you are back blogging. Thanks for the reference to ..."
Joe A Church Historian’s First Communion
"Thank you for all your enjoyable, informative posts on Church history. I agree that the ..."
Kathleen Brady Looking at the Scandals– A Church ..."
Browse Our Archives
get the latest from
McNamara's Blog
Sign up for our newsletter
POPULAR AT PATHEOS Catholic
1