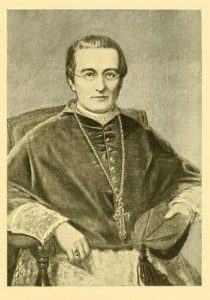 William Tyler was born on the 5th of June, 1806, at Derby, Vermont, his father being a substantial farmer, his mother a sister of the famous convert Rev. Daniel Barber. She followed the example of her relatives and soon after their conversion m 1816, was received into the Church, with her three sons and four daughters. When about fifteen, William entered the classical school established at Claremont by Rev. Virgil Barber. Showing a vocation for the priesthood, he was taken into his house by Bishop Fenwick and began his theological course, receiving ordination in Pentecost week, 1828. His first appointment was in the cathedral, Boston, where his zeal and piety, as well as his charity, won all hearts, his only absence being a short missionary service at Aroostook. He was in time made vicar general of the diocese, and on its division in 1843, he was selected as the first to wear the mitre as Bishop of Hartford. He was consecrated on the 17th of March, 1844, by Bishop Fenwick, and proceeded to his diocese, which embraced Rhode Island and Connecticut, and contained only six priests. He took up his residence at Providence, making the church of St Peter and St Paul his cathedral. The health of Bishop Tyler was never strong, and he loved retirement and prayer, but he was zealous in his missionary and episcopal duties, and gradually increased the numbers of his clergy and churches, accomplishing all the more by means of allowances from the Leopoldine Society. He attended th,e Sixth and Seventh Councils of Baltimore, presenting to the Fathers of the latter synod a certificate that he could not long survive and asking permission to resign his see. The appointment of a coadjutor was recommended by the Fathers of the council. but Bishop Tyler returned to his diocese only to be stricken down by a rheumatic fever. He was for a time delirious but recovered his faculties, and receiving the last sacrament, gave the final directions as to the affairs of the diocese, and closing his eyes to all earthly things, murmured pious ejaculations and prayers till his soul departed June 18 1849.

August 15, 2013 Catholics in American History: A View from 1908
Recent Comments
0 | Leave a Comment
"Thank you for all your enjoyable, informative posts on Church history. I agree that the ..."
Kathleen Brady Looking at the Scandals– A Church ..."
"Such laws might have done Ireland some good, in the case of the Magdelenes. The ..."
HematitePersuasion “A Million Foreigners, Most of Them ..."
"sounds like a total waste of time"
kyuss, cannabis farmer Holy Name Rally at Ebbets Field ..."
"This is a marvelous joining of three important Brooklynites who happened to have gone to ..."
Joe Three Giants of Brooklyn Catholicism
Browse Our Archives
Follow Us!