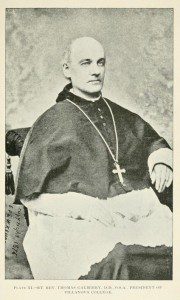 Thomas Galberry first saw the light at Naas, in the County Kildare, Ireland, in 1833, but three years after his birth, his parents came to this country and settled in Philadelphia. Here he received his early training, and at the age of sixteen, entered Villanova College. On his graduation in 1851, he resolved to renounce the world, and the next year received the habit of the Hermits of St. Augustine at Villanova.

After a fervent novitiate, he began his divinity studies, and was ordained priest by Bishop Neumann, December 20, 1856. Father Galberry was, for two years, a professor at Villanova, then pastor of St. Dennis Church, West Haverford. At the opening of the year, 1860, he was sent to Lansingburg, New York, a mission long in the hands of the Augustinians. Here he erected a fine Gothic church at a cost of more than thirty three thousand dollars, and near it a house for the Sisters of St. Joseph.

On the 30th of November, 1866, he was made superior of the Commissariate of Our Lady of Good Counsel, the mission of his order in the United States. While holding this important office, he took charge at Lawrence, Mass., completing the church in that place, and having been elected president of Villanova College, erected a new edifice and reorganized the university course. When the Augustinians in the United States were formed into the province of St. Thomas of Villanova in 1874, Father Galberry was elected provincial, but was soon after appointed by the Pope Bishop of Hartford.

Reluctant to sever his life from his religious brethren, he forwarded his resignation to Rome, but was required to obey. He was accordingly consecrated by Archbishop Williams, March 19, 1876. On assuming the mitre of Hartford, he entered on his duties with his wonted zeal and devotion, seeking to spread through his flock solid and deep piety and attachment to the faith as he had while superior of his order, and extended the Third Order of St Augustine with great spiritual fruit. He was not, however, long to rule the diocese of Hartford.

In October 1878, feeling that his health was breaking, he hoped that a visit to Villanova would enable him to recruit his strength and obtain the care of physicians who knew his constitution. His case, however, was far more critical than he supposed. Before the rapidly moving cars reached New York, Bishop Galberry was seized with a hemorrhage, and as the Grand Central Station was entered, he was conveyed to a hotel, and medical aid was summoned. It was beyond the power of science to arrest the malady. The faithful bishop prepared to surrender a life which he had spent in the service of religion and his fellow men, and was attended by several of the city clergy. He died calmly about seven o’clock in the evening of October 10, 1878, greatly lamented by his fellow religious, and by the diocese of Hartford, which had just begun to appreciate his worth.

John Gilmary Shea, The Hierarchy of the Catholic Church in the United States (New York: Office of Catholic Publications, 1886), 256-257.

May 25, 2014 Catholic Poetry: "You Silent Dead," In Honor of the Civil War Veterans
Recent Comments
0 | Leave a Comment
Browse Our Archives
Follow Us!