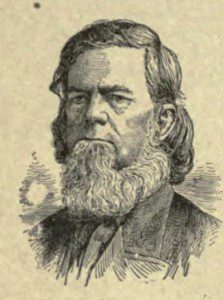 The Order of the Star Spangled Banner was founded in New York in 1849 in opposition to the rise of a predominantly Catholic immigration to the United States. Members were pledged to secrecy about the order. When asked about it, they answered “I know nothing”; hence the nickname the “Know-Nothings.” During the 1850’s, membership rose rapidly among native-born white Protestants who termed themselves “native Americans.” Here is an account of an Alabama Know-Nothing who subsequently repudiated his views and converted to Catholicism (for what exact reason has not been listed here):

SMITH, William Russell, fourth president, the University of Alabama, 1870-71, was born at Russellville, Logan co., Ky., Mar. 27, 1815, son of Ezekiel and Elizabeth Hampton Smith, and a descendant of Col. Arthur Smith, who emigrated from England to Isle of Wight county, Va., in 1622, and in 1653, was the founder of Smithfield.

Through his mother, he was descended from the Hamptons, Russells and Lowrys. After the death of his father, his mother removed to Alabama, settled in Tuscaloosa. The son, who was a remarkably talented lad, was educated at the University of Alabama, which had just been established, and remained there from 1831 until 1834, when he took up the study of law. In 1835, he was admitted to the bar and immediately began to practice at Greensboro. In 1836, during the Creek War, he was captain of Alabama troops, and his company being disbanded at Mobile, was engaged in journalism.

In 1838, he resumed the practice of law in Alabama. During 1841-43, he was a member of the legislature. In 1845, he  became brigadier general of the state militia and in 1850-51, was judge of the seventh judicial circuit court of Alabama. In the latter year, he was elected as a representative to congress. He served until 1857, and became distinguished for his brilliant speeches, one of the most notable being that in which he successfully opposed the attempts of Kossuth to involve this country in a foreign war. In a speech made in 1856, he originated the saying afterward so widely quoted: “The union of the states is a political indestructibility.”

He became a leader in the American party, but subsequently deprecated the extreme position taken by its members, and retracted his violent anti-Catholic speeches.

In 1861, as a delegate to the Alabama convention, he strongly opposed disunion, but although he refused to sign the secession ordinance, he remained with his state. He was commissioned colonel of the 26th Alabama regiment, which position he was induced by his friends to resign in order to serve in the Confederate congress. He was a member of that body from 1861 until 1865, when he retired to private life. In July 1870, he was elected president of the University of Alabama, which was passing through a period of adversity, and upon the resignation of the professor of mathematics, he assumed the duties of that post also.

The affairs of the institution had been in a deplorable condition for several years and finding the outlook discouraging, Judge Smith remained for some there time and terminated his connection with the university in July 1871. He removed to Washington, D.C., in 1879 and there spent the remainder of his life. He was not only an eloquent powerful speaker, but was a writer of ability. Much of his time was devoted to the study of classical literature, and he made several excellent translations from the Greek.

Catholic
“A Million Foreigners, Most of Them Papists”: The...
McNamara's Blog
TRENDING AT PATHEOS Catholic