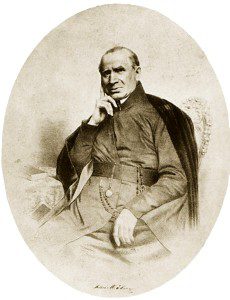 I was born in the province of Ulster, the most northern province of Ireland, … in 1782, … At the time of my birth, Catholic emancipation had made no headway in Ireland, and hence I received simply a common education, … I left Ireland for America, in 1803, when twenty-one years old. … I landed first at Baltimore, and went from there to Georgetown.

Jefferson was president of the United States when I landed. I have met him several times, and often had occasion to admire his republican simplicity. When I took the stage in Baltimore and came to Washington … I went to Georgetown . . . and entered into commercial life. I gave up the mercantile life to go to college. I entered Georgetown College in the capacity of clerk or bookkeeper. The October following I entered the noviciate as lay-brother where I remained as such for nine years.

(It was during this period that I witnessed, from the college windows, the burning of the capital by General Ross, after the battle of Bladensburg.)

I remained in Georgetown four years, filling the same office I occupied before. I . . . came from there [to Frederick] in 1822. I remained until 1845. During that time I erected the center building of the Academy of the Visitation, over the way, for the Sisters of Charity. I was removed in 1845 to take charge of a church in Georgetown, of which I was pastor.

The Mexican war having broken out. President Polk called upon the bishop for a chaplain for the army. I had the honor of being selected by them, and was sent with Father Ray to the army,… the President said the Mexicans were all Catholic and must be conciliated. I was with General Taylor’s part of the army and became quite intimate with him. I remained with the army as chaplain for one year. In 1847 I went to Boston to see Bishop Fitzpatrick. He offered me a church and my provincial consented. I was placed in charge of St. Mary’s and was there about seventeen years. My life in Boston was at times somewhat tempestuous, but it pleased the Almighty to bless my labors abundantly. I immediately set to work and built a number of schools. At length what was known as the jail lands were offered for sale, on which formerly stood the jail . . . the land was purchased by a gentleman and I succeeded in inducing him to part with a portion of it. My purpose was to erect a college. The cry was raised of “Church or no Church,” “Father McElroy or not.” A desperate struggle ensued. Finally … I sold the property back to the city and bought a lot, almost an entire square, on which I erected a college, which is at present in a very flourishing position. A violent prejudice was manifested against granting a charter with college rights, but I secured the services of General Cushing, whom I had known in Mexico. He introduced me to the Legislature, by whom I was received with great kindness and my modest petition was granted. It was on this occasion that I was introduced to Governor Andrew, who informed me that it would give him great pleasure to sign the bill as soon as it passed the Legislature. I subsequently built and dedicated in 1861 the Church of the Immaculate Conception, the finest church in Boston. It was consecrated with imposing ceremonies.

Since leaving Boston I have been engaged in the ordinary duties of the ministry, my failing sight having curtailed and impaired, to a great extent, my usefulness. I still say Mass and preach here [Frederick] at the novitiate, but I am unable to travel without a guide, and that would be making two do the work of one. I have often known one to do the work of two, or even three, but I think the reversal of the rule would be unprofitable.