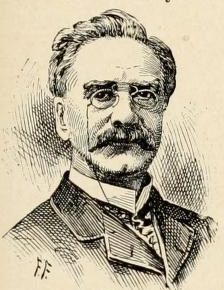 MUNRO, Peter Simcoe Morton, actor, author and lecturer, was born in York, England, Feb. 17, 1842, son of Rev. Alexander Fraser and Helen (Miller) Munro, both natives of Scotland, who came to America when the subject of this sketch was twelve years old. After attending the Model School, Toronto, Canada, he studied oratory and dramatic art for three years. He began to learn the printing trade, but soon gave it up to enter the dramatic profession, in which he remained for several years, playing many parts in various cities of the United States and Canada in the old stock company days.

During the Civil War he enlisted in the 34th Independent Battery of Flying Artillery, N. Y. Volunteers, and served on Roanoke Island and in front of Petersburg. Returning to New York, he yielded to the wish of his father, who was a Presbyterian minister, to give up the stage as a profession and went into the printing business. Although he ranks as an authority on the use of types and on typographical designing, he is even better known in America for his literary and historic abilities, and for his success as a teacher and lecturer.

In 1879 he became assistant editor of the “American Model Printer,” the pioneer of the class of technical periodicals, published in New York City by Kelly & Bartholomew. He was successively the usiness manager of “Thoughts and Events,” a weekly journal of literature and affairs, chief editor of the “Daily Financial Report,” a journal devoted to the money, stock and bond market and chief editor of the “American Art Printer,” probably the most exquisite exponent of advanced typography ever issued, meanwhile serving as the New York correspondent for a number of western and southern journals. In 1892 he assumed the editorship of the “American Pressman,” a monthly, devoted to the interests of the organized printing pressmen of the United States and Canada, who were then battling with the International Typographical Union for recognition as a separate and distinct branch of the printing trade. In this magazine appeared the most trenchant articles from his pen, so forcibly and logically framed that, before two years had elapsed, the Typographical Union was glad to capitulate and fully recognize the autonomy of the printing pressmen. After this victory, Mr. Munro retired and accepted the editorship of the “Exponent,” a society journal published in Brooklyn by John Suter.

For thirty-five years Mr. Munro has been known as a thorough instructor in elocution and dramatic art. Many prominent actors and actresses, clergymen, lecturers, and platform entertainers received their finished training in his Brooklyn studio of expression. For more than thirty years he has taught in the schools, academies and colleges of the Catholic church, among them St. John’s College, Fordham, St. Francis Xavier’s College, New York City, and St. Francis’ College, Brooklyn, College of St. Angela, New Rochelle, N. Y., and the St. John’s Boys Home, Brooklyn, besides a number of parochial schools and literary unions where he is teacher and director of entertainments.

He was professor of elocution in the Brooklyn Evening High Schools, for three years. He is the author of a number of comedies, dramas and farces that have been performed with varying success: “A Point of Honor” (1873), “The Banker’s Son,” (1884), “Parvenues,” (1888), “In a Trance,” (1890),  “A Needless Sacrifice” (1892), “The Defaulter” (1895), and “An Awful Break,” (1898). The versatility of the man is further shown by his public lectures, the most popular of which are: “The Comedians of the Pen” (illustrated with portraits), “Francis Bret Harte” (illustrated), “Revelations of the Obelisk” (illustrated) and “Impression and Expression.” He has also recently completed a novel of modem life entitled “As Thyself,” which was written in collaboration with his late father-in-law, Dr. Charles Testut.

In military circles Mr. Munro is the general commanding the department of the east in the Army and Navy Union of the United States, and since 1905 he has been president of the War Veterans and Sons’ Association of the United States of America. He is also a past commander in the Grand Army of the Republic, a member of the New York Press Club and the Thirteen Club. He was married June 22, 1865, to Eugenie Louise Isabelle. daughter of Dr. Charles Testut of New Orleans. He has three sons living: Albert Alexander, a draughtsman and designer with Tiffany & Co., Leon Charles, and George Edwin, and two daughters: Emma Lauretta, and Aida May Munro.

June 12, 2014
Catholic History in Less Than Five Minutes-- The Benedictines and Western Civilization
Next Post

June 13, 2014 Atonement Friars Received Into the Church, 1909
Recent Comments
0 | Leave a Comment
"Very interesting. Why did the Jesuits change the name of the school from a saint's ..."
Kristin Nealon Wilson Ocds Who’s Buried in Catholic Cemeteries?
"It is a joy to that you are back blogging. Thanks for the reference to ..."
Joe A Church Historian’s First Communion
"Thank you for all your enjoyable, informative posts on Church history. I agree that the ..."
Kathleen Brady Looking at the Scandals– A Church ..."
"Such laws might have done Ireland some good, in the case of the Magdelenes. The ..."
HematitePersuasion “A Million Foreigners, Most of Them ..."
Browse Our Archives
Follow Us!