Atonement Friars Received Into the Church, 1909 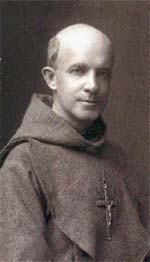 EMBRACE CATHOLIC FAITH. Members of the Society of Atonement at Graymoor Received into Church. (The New York Times, October 31, 1909)

WEST POINT, N.Y., Oct. 30—The Society of the Atonement at Graymoor, near Garrison, N.Y., was corporately received into the Catholic Church today, the ceremony taking place in the chapel of the community. The Right Rev. Mgr. Joseph H. Conroy, Vicar General of the Diocese of Ogdensburg, an old friend of the Society, acting under the authority of Archbishop Farley, of New York, officiated. Mgr. Conroy was assisted by the Rev. Father Pascal Robinson, of the Franciscan Monastery, of Washington, D.C., and the Rev. Patrick H. Drain, pastor of the Church of Our Lady of Loretto, Cold Spring, in whose parish Graymoor is situated. Seventeen members were received in all.

The Society of the Atonement, heretofore, has been a company of Anglicans living under the rule of St. Francis, and its founder, Father Paul, has become well known as advocating the corporate reunion of the Anglican Church with the Holy See. Father Paul has carried on this work largely as editor of The Lamp, a monthly magazine published under the auspices of the society, and as joint author with the Rev. Spencer Jones, a clergyman of the Church of England, of The Prince of the Apostles. The reception of the Society of the Atonement as a body, preserving its name and corporate existence, is an exceptional privilege granted from Rome, as the result of a petition made some time ago to Pope Pius, through Mgr. Falconio, the Apostolic Delegate at Washington. The instructions of the society preceding their admission, were given by the Right Rev. Mgr. O’Keefe, pastor of the Church of the Sacred Heart, Highland Falls.

June 13, 2014 The “White Benedictines” of Arkansas (1874)
Recent Comments
0 | Leave a Comment
Browse Our Archives
get the latest from
McNamara's Blog
Sign up for our newsletter
POPULAR AT PATHEOS Catholic
1