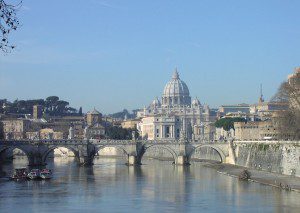 I was brought up in Rome under a rather feeble ministration of the Anglican Church, which seemed always cold and empty beside the real Churches we constantly visited as children. As I grew older my indifference to Protestantism only increased. I felt there was but one living Church; outside of that was to be found only free thought, philosophical eclecticism, and a vague platonic idealism. For some time I did not wish to bind myself to any form of belief, preferring to drift from one poetical or scientific theory of the Universe to the other.

All through these growing years, from fourteen to nineteen, I read everything I could find in the way of philosophy and metaphysics; but, having no guide, my reading was very desultory. I think a prolonged study of Dante’s Divine Comedy was probably laying in my mind the foundations of Catholic synthesis, although I did not know it till afterwards. Three years of Dante lessons with a learned Abbate Pagliari were very enlightening. I realized how vastly inclusive Catholic belief could be; how logical, while it transcended all logic, how it ministered to all humanity with its divinity.

After Dante, Pascal, St. Augustine, and the Imitation, were my teachers. It was always the note of intellectual helplessness, in the face of the eternal problems, that appealed to me in Pascal. “Il est bon d’ĕtre fatigué et lassé par I’inutil recherche du vrai bien, afin de tendre les bras au Liberateur.” In St. Augustine the same lofty strain appears, joined to a more passionate intensity and a clearer vision.

So the stream of my convictions came to me as rivulets from many sources. I made the acquaintance of Monsignor Puyol, the Superior of St. Louis des Français, in Rome. He with great kindness and patience gave me the necessary instruction, overcame my last scruples of doubt, and on the feast of St. Joseph, 1883, received me into the Church to which, by taste and inclination, I had belonged since my first childhood.

June 21, 2014 St. Aloysius Gonzaga, a Poem by Father William Hart McNichols, S.J., 1989
Recent Comments
0 | Leave a Comment
"Wow! I didn't know about that Statement from the US Bishops. The fact that they ..."
Florence Ziegler “It’s About Time They Got Here”:  Catholics ..."
"Very interesting. Why did the Jesuits change the name of the school from a saint's ..."
Kristin Nealon Wilson Ocds Who’s Buried in Catholic Cemeteries?
"It is a joy to that you are back blogging. Thanks for the reference to ..."
Joe A Church Historian’s First Communion
"Thank you for all your enjoyable, informative posts on Church history. I agree that the ..."
Kathleen Brady Looking at the Scandals– A Church ..."
Browse Our Archives
get the latest from
Catholic
Sign up for our newsletter
POPULAR AT PATHEOS Catholic
1

A Dandelion and a Mothers' Day...
Steel Magnificat
Related posts from McNamara's Blog