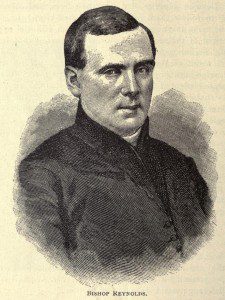 Ignatius Aloysius Reynolds was born near Bardstown, Kentucky, August 22, 1798, of one of the Catholic families that emigrated from Maryland to that State. Trained under Bishop Flaget and Dr. David he early showed a real vocation, and was one of the first students in the Theological Seminary at Bardstown. Completing his course at St Mary’s, Baltimore, the young Kentuckian was ordained there October 24, 1823. Returning to his native State, he became professor, and subsequently president, of St. Joseph’s College, and professor in the seminary. He bore his share in the missionary duties, especially during the visitations of the cholera. He succeeded Bishop David as ecclesiastical superior of the Sisters of Charity, and was for many years vicar general of the diocese, before and after the removal of the see to Louisville. The Fathers of the Fifth Council of Baltimore nominated Rev. Mr. Reynolds as successor to Dr. England, and he was consecrated by Archbishop Purcell [as] Bishop of Charleston March 19, 1844, in the cathedral of Cincinnati. He made frequent visitations of his diocese, gathered the scattered Catholics, besides winning many converts to the faith. His flock numbered about twelve thousand in a population of two millions, but the diocese of Charleston was heavily in debt; the frame cathedral and bishop’s house were fast falling into ruins. Bishop Reynolds visited Europe to obtain aid, and on his return, assembled his clergy for a retreat. He began to collect means for a suitable cathedral, and secured a site, but the work was not begun till May 1850. Bishop Reynolds had the consolation of seeing it dedicated in April 1854. His labor in his diocese was active and unremitting; although his health was never rugged, He attended the Sixth and Seventh Councils of Baltimore, and the First Plenary Council [of Baltimore, 1852], but his strength failed, and he died of congestion of the lungs, March 9, 1855, having as his fellow bishops declared, “worn himself out in the service of his Church.” The whole diocese of Charleston deplored the loss of the kind generous and laborious bishop.