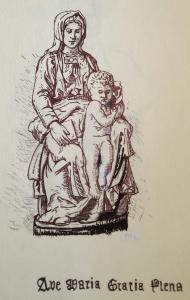 Born in France and raised in England, Hilaire Belloc (1870-1953) was one of the most prolific, not to mention fiery and controversial, Catholic authors in the first half of the twentieth century. He wrote in just about every genre: poetry, travel writing, essays, history, biography, and current events. Deeply committed to Europe’s Catholic heritage, one of his most famous quotes is “the faith is Europe and Europe is the faith.” His writing has inspired the likes of Pink Floyd and Monty Python, among others. “Courtesy” was one of his most popular poems in Catholic circles.

Of Courtesy, it is much less

Than Courage of Heart or Holiness,

Yet in my walks it seems to me

That the grace of God is in Courtesy.

On Monks I did in Storrington fall,

They took me straight into their Hall;

I saw three Pictures on a wall,

And Courtesy was in them all.

The second the Visitation;

The third the Consolation,

Of God that was Our Lady’s Son.

The first was of Saint Gabriel;

On Wings a-flame from Heaven he fell;

And as he went upon one knee

He shone with Heavenly Courtesy.

Our Lady out of Nazareth rode–

It was her month of heavy load;

Yet was Her face both great and kind,

For Courtesy was in Her Mind.

The third it was our Little Lord,

Whom all the Kings in arms adored;

He was so small you could not see

His large intent of Courtesy.

Our Lord, that was Our Lady’s Son,

Go bless you, People, one by one;

My Rhyme is written, my work is done.

(*The above drawing is by Pat McNamara.)

December 3, 2018 The Feast of St. Francis Xavier (1506-1552)
Recent Comments
0 | Leave a Comment
Browse Our Archives
get the latest from
McNamara's Blog
Sign up for our newsletter
POPULAR AT PATHEOS Catholic
1 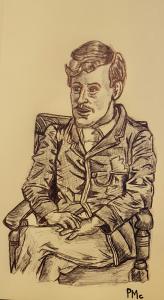