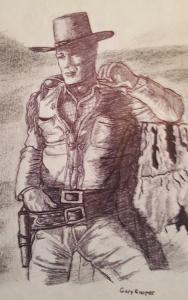 Gary Cooper wasn’t raised Catholic, but his wife Veronica and daughter Maria were devout Catholics. “In the mid to late fifties,” his daughter Maria recalls, “my father’s conversion to Catholicism started silently. He never discussed much about it but simply started joining us for Mass more often.” On April 9, 1959, two years before his death of cancer, Cooper was formally received into the Catholic Church at Beverly Hills’s Church of the Good Shepherd. His daughter recalled that in his final weeks, Cooper took great comfort from Thomas Merton’s book No Man is an Island.  Merton later wrote her a letter following his death on May 13, 1961:

Dear Maria,
I was touched by your kind letter, and glad that it gives me an opportunity to greet you and your mother personally, and advise you of my friendship and good wishes. With everyone else, I loved Gary Cooper and his great movies, which I often remember with satisfaction–well, relatively often. For it is a long time since I have been to a movie. I even had a temptation and hope that if Seven Story Mountain became a film, he would play a part in it. This was a clear case of vanity on my part!! Anyway, with all my blessings and good wishes,
Father Louis Merton

Originally, Cooper was buried at Holy Cross Cemetery in Culver City, California. After his family moved to New York, his daughter recalls, he was re-interred at Sacred Hearts of Jesus and Mary Cemetery in Southampton:

Gary Cooper took a lot of people with him on his life’s journey from the hills of Montana to a quiet plot marked with a huge boulder from a Montauk Point rock quarry. The church had some “rules” about why they would not like that stone in the cemetary, but my mother flashed her green eyes at the presiding pastor and snorted, “Do you mean to tell me that if Jesus Christ said, ‘Thou art Peter, and upon this rock I will build my church . . .,’ you will now refuse to let me have a rock for a marker for my husband’s grave…” Well, a massive salmon-and-beige-colored stone, probably 316 million years old, from the Bistrian quarry, anchors the burial site in Southampton. It’s a perfect symbol for what my father loved and stood for.

(*The above drawing of Gary Cooper, from the 1940 movie The Westerner, is by Pat McNamara.)

December 13, 2018 Who's It Named For? Collins Hall, Fordham University, Bronx, New York
Recent Comments
0 | Leave a Comment
"Wow! I didn't know about that Statement from the US Bishops. The fact that they ..."
Florence Ziegler “It’s About Time They Got Here”:  Catholics ..."
"Very interesting. Why did the Jesuits change the name of the school from a saint's ..."
Kristin Nealon Wilson Ocds Who’s Buried in Catholic Cemeteries?
"It is a joy to that you are back blogging. Thanks for the reference to ..."
Joe A Church Historian’s First Communion
"Thank you for all your enjoyable, informative posts on Church history. I agree that the ..."
Kathleen Brady Looking at the Scandals– A Church ..."
Browse Our Archives
Related posts from McNamara's Blog