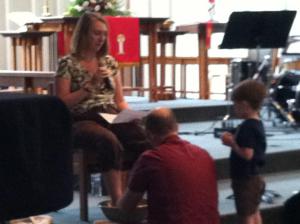 Few verses in the Bible have been more damaging historically to women in Western civilization than Ephesians 5:22 — “Wives, submit to your husbands as to the Lord.” This has been a go-to verse in the argument against giving the women the right to vote or letting them have careers outside the home; more drastically it has been used to counsel women in abusive relationships not to leave their husbands since they should submit to them even if they’re violent. It was because of this history that my wife Cheryl and I decided to tackle this verse in the first sermon that we preached together seven years ago at our wedding, also because the passage from which it’s taken — Ephesians 5:21-33 — has beautiful wisdom to share about marriage when the social and Biblical context for the passage is properly understood. This past weekend at Burke United Methodist Church, we preached together on this passage again, washing each others’ feet while the other one spoke in order to model our understanding that submission is the form that Christian leadership takes.

It is critical to understand first of all the social context in which Paul was writing to the Ephesians. Roman civilization was legally organized according to households. The patriarchal head of each household represented his household in all public civic life. He was called the paterfamilias, and he had absolute power and authority over everything that happened in his household. He could sell his children into slavery or divorce his wife for any reason provided he paid back the dowry to her parents. He could put babies to death if they were deformed or ugly-looking to him. Legally speaking, no one could question what a man did inside the walls of his own castle. It was only when he had a quarrel with a different household that the public judicial system got involved. Understanding the absolute power of the Roman paterfamilias helps us to recognize that when Paul says that “the husband is head of the wife as Christ is head of the church,” he is referencing the legal reality of his society, not God’s eternal design for marriage!

The reason I feel confident making that claim is because of what I read in Galatians 3:28: “There is neither Jew nor Greek, neither slave nor free, nor is there male and female, for you are all one in Christ Jesus.” Despite the fact that it has taken Christians two millennia to live into the kingdom reality that Paul lays out in Galatians 3:28, equality between genders is a Biblical concept, not a recent secular innovation. Christian theologians often talk about life in the kingdom as an already but not yet reality. Galatians 3:28 gives us a depiction of what the human relations should look like in the kingdom of God based on what Christ has already established. Ephesians 5:22-24 tells wives how to live in the structure of Roman society which has not yet been made into God’s kingdom. The point of Ephesians 5:21-33 is not to reinforce pagan conceptions of gender hierarchy but to exhort men and women living in a fallen social order to be servants to one another in marriage using language tailored to each of their first century socialized roles.

Jesus tells us in Mark 10:42-44 that we have no business using pagan models of top-down authority in our life together as Christians: “You know that those who are regarded as rulers of the Gentiles lord it over them, and their high officials exercise authority over them. Not so with you. Instead, whoever wants to become great among you must be your servant, and whoever wants to be first must be slave of all.” This passage is the basis for which Christians get the concept of “servant leadership.” It’s very trendy today to talk about leadership in the evangelical megachurch world, but I don’t hear a lot about servanthood. Maybe it’s because servanthood doesn’t draw much of a crowd. But Jesus is unequivocal that we lead by being servants, not just by serving.

There’s a very important distinction to be made between servanthood and service. When Jesus says to be a slave of all, he is talking about the radical self-abasement that he models in washing his disciple’s feet. In our era of volunteerism, we have learned how to engage in service towards needy people without submitting ourselves to them as servants. Service without servanthood is almost more oppressive than not serving at all; it creates shame and dependency rather than empowerment. The person “serving” can leave feeling good about themselves for putting in their quota of compassion for the month, but nothing about the underlying power structures in the world has changed as a result. Servanthood on the other hand means submitting yourself to another person for the sake of lifting him or her up. When Jesus washes His disciples’ feet, He is not just helping or serving them; He is putting Himself beneath them. So Christian leadership is not service in the sense of making decisions for other people or doing what they don’t know how to do for themselves; it is putting ourselves beneath others for the sake of their empowerment. True Christian leadership, as described in Mark 10:42-44, is submission.

That’s why it’s nonsense to try to extrapolate a power hierarchy out of Ephesians 5:22 based on Paul’s use of the word “submit.” When we put Ephesians 5:22-24 in the same Biblical canon with Mark 10:42-44, what we get is that Paul is telling wives to be servant leaders to their husbands, which is the same thing Paul tells husbands to do for their wives in a different way in Ephesians 5:25-28. This is why foot-washing is such an excellent symbol of the mutual servanthood in marriage. Who is submitting when a wife washes her husband’s feet? Who is in charge when a husband washes his wife’s feet? Neither and both in both cases. It is submission to wash and submission to be washed. When done correctly, servant leadership makes it impossible to distinguish who is in charge. This is certainly a scandal to the pagan understanding of authority, but it should not be to Christians. When Christian men use Ephesians 5:22 to make themselves into Gentile princes, then the wife will continue to be sanctified by her humility, but the husband is precluding himself from the imitation of Christ’s servanthood.

Even though the first century pagan model for gender relations has cast a two thousand year shadow over many Christian marriages, we have made considerable progress in our understanding of gender relations over the last century that should be celebrated, not mourned. The more that women are valued as equal and the more that husbands and wives strive to be servants to their spouses, the more we conform to God’s vision for life in His kingdom. There are multiple currents at play in the turbulence our society has experienced since the upheaval of the 1960’s. Some are entirely destructive, unholy, and contrary to God’s vision for humanity, but the growth of equality between the genders is not. This equality takes its holy kingdom form when it is established not through arm-wrestling over rights and self-interests but through the mutual submission of Christian servanthood. Let me give Paul the last word on this from Philippians 2:1-7:

Therefore if you have any encouragement from being united with Christ, if any comfort from his love, if any common sharing in the Spirit, if any tenderness and compassion, then make my joy complete by being like-minded, having the same love, being one in spirit and of one mind. Do nothing out of selfish ambition or vain conceit. Rather, in humility value others above yourselves,not looking to your own interests but submitting to the interests of the others.

Who, being in very nature God,
did not consider equality with God something to be used to his own advantage;
rather, he made himself nothing
by taking the very nature of a servant,
being made in human likeness.
And being found in appearance as a man,
he submitted himself
by becoming obedient to death —
even death on a cross!

August 23, 2012
3 gospel stories made into Atlas Shrugged
Next Post

7 Reasons the Bible is NOT...
All Set Free
Related posts from Mercy Not Sacrifice