Dehumanization Is The Real Enemy 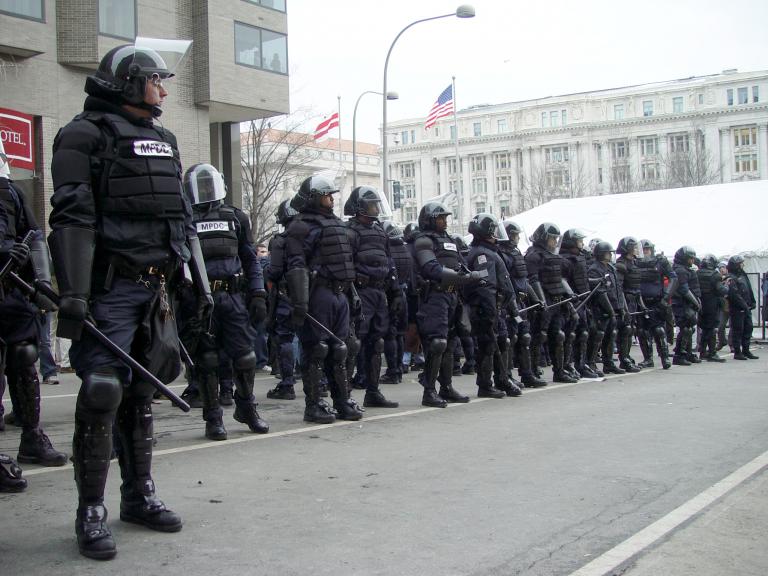 We are living in demonic times. Whatever you believe about Satan, I use the word metaphorically to simply communicate that our real enemy is not “rioting hoodlums” or “authoritarian pigs” but dehumanization itself. We are caught up in what may increasingly become a dangerously escalating reactive cycle of rage. On one level, it’s important to name the white supremacist underpinnings of our society that have put us in this situation; on the other hand, there’s a way in which that labeling participates in our toxic family system if it’s misunderstood.

Here’s the subtle thing about white supremacy. It’s not actually white people consciously thinking they’re superior to other people. It’s rather a cultural system rooted in the European Enlightenment that champions impersonal reason disconnected from cultural tradition as the pinnacle of human achievement. There are valid achievements that have come from the Enlightenment, but Western culture has become an incredibly impersonal world because the social systems we have designed reflect the cold sterility of generic, rootless “reason.” We have impersonal bureaucracies with tedious paperwork and rubber stamp processes that grind people into dust, especially poor, black people. Nowhere is this more evident than every aspect of our so-called criminal “justice” system.

So in the midst of this impersonal, dehumanizing, bureaucratic world created by the so-called “reason” that once was European Christendom’s crowning achievement, we have a police force that includes people of all races, but is predominated by a group of hyper-masculine white men who have been trained to use intimidation tactics to make people they don’t have personal relationships with submit to them on a daily basis. And these white men deal with workplace trauma every day in a culture that might shame them if they actually cried and processed that trauma in a healthy, safe context.

What I’ve been learning in my counseling training is that when we are triggered by adrenaline after absorbing a certain amount of trauma, our body can temporarily revert to a sort of reptilian brain mode where we fight, flight, or freeze. In counseling sessions, people can go completely incoherent for twenty minutes at a time and even forget what they said when they were in that triggered state.

Cops are presumably trained to fight when their reptilian brain mode kicks in. They certainly can’t run away or freeze. But if adrenaline amps them up and they lean into their rage in accordance with their training, then they’re going to do incredibly hideous, inhuman things like kneel on a man’s neck until he suffocates. I don’t say this to take away the culpability for this monstrous behavior, but the systemic forces of impersonal bureaucracy and patriarchal authoritarianism are more culpable than the individual imperial stormtrooper who has been spit out by the system.

People who have been made into imperial stormtroopers are not having happy lives, even if they get smashed every weekend. They’re being oppressed by the system too in a different way that of course isn’t comparable to being the black man who gets killed during a traffic stop, but it’s the system that needs to be dismantled.

So how do we dismantle the system? A big part of it is to create enough pressure for politicians through street protests and public pressure that actual laws are implemented to create accountability and real consequences for police misconduct which are costly enough to police departments that they’re forced to change everything about their training. Of course, any changes in training that still occur in a paradigm of cold, impersonal bureaucracy don’t go as deep as we really need to go.

Malcolm Gladwell wrote a book called Talking To Strangers that was obnoxious and problematic in some ways but recognized an important truth about interactions that police have with the public. When authority figures are strangers to the people they have authority over, there’s no basis for trust in their relationship and so authoritarian tactics of intimidation become the only way to gain compliance. In a dehumanized world where everyone is on edge, this impersonal paradigm for law enforcement is the recipe for disaster.

What if security in our world looked more like a collaborative effort between neighbors to take care of each other and settle disputes instead of an impersonal bureaucracy that throws people in jail and destroys families? Maybe if enough buildings get burned down, then America will be forced to completely rethink how we approach criminal justice. We can replace the toxic retributive paradigm for justice in which “doing time” is the ludicrous non-solution for the rupture of community that crime causes with a restorative justice paradigm in which community elders help the perpetrators and victims of disputes and violations engage in a collective healing process together.

Honestly, I’m not very confident that anything will change about our society until we have endured enough upheaval that a critical mass of people reach a state of complete surrender. When the white middle class people who have the most political power in our country feel like everything about our way of life has fallen apart, then we will be able to build a completely new society. Or perhaps we can simply decide to create a less dehumanizing social order without having our society reduced to rubble first.

June 1, 2020
Star-Spangled Virus (A Poem About America)
Next Post

June 2, 2020 All Poetry Is God-Breathed
Recent Comments
0 | Leave a Comment
"Read Joseph Campbell's book, The Hero With A Thousand Faces, and good luck!"
Enlightened | Morgan Guyton
"You may be over-thinking things a bit. It appears you now believe in nothing; better ..."
Bob Shiloh | Morgan Guyton
"The times, they are a'changin'! Thank you for sharing your insights from your walk in ..."
Zeigler John | Morgan Guyton
"There is a lot here, but just two comments to think about. First - you've ..."
Robert Hunt | Morgan Guyton
Browse Our Archives
get the latest updates from
Mercy Not Sacrifice
and the Patheos
Progressive Christian
Channel
POPULAR AT PATHEOS Progressive Christian
1