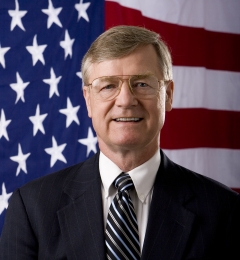 He always had a joke for the pastor in the handshake line, often a slapstick pun characteristic of an older guy who didn’t mind being corny. He carried himself with the confidence of an ordained Methodist minister, former congressman, seminary president, and National Council of Churches secretary-general, but he was thoroughly humble and approachable, caring intimately about the personal lives of his fellow parishioners at Burke United Methodist Church. I was deeply honored to be a pastor in the church that Bob Edgar attended. His most recent position was the president of Common Cause, a national campaign to get corporate money out of politics. Bob believed in democracy, and he believed that Christians should fight for the common good. It was devastating to learn of his sudden death this week in a dark time when his prophetic vision has never been more sorely needed.

Bob began his career as a Methodist pastor when he was 19 years old. He couldn’t afford to pay for college and he had been active on the district level in the Methodist Youth Fellowship so he was able to talk the bishop into letting him pastor a small country church in Gilberton, Pennsylvania that couldn’t afford a fully ordained pastor but could pay Bob enough to cover his tuition at Lycoming College. In Bob’s senior year of college, he married Merle Deaver, whom he had dated since he was fifteen after meeting her at a Methodist youth event in September 1958.

Bob went on to attend seminary at Drew University and then took an appointment at a parish in the East Falls neighborhood of Philadelphia. It was the only parish congregation he would serve as an ordained minister. In the late sixties, East Falls was rapidly transitioning into an African American neighborhood as whites were fleeing en masse to the suburbs. Much to the chagrin of his congregation, Bob began to build relationships with the African American community, a process he would continue when he took his second appointment as the campus chaplain at Drexel University.

While at Drexel, Bob saw that battered women in his neighborhood were sleeping in bus stations because they had no place to go when they ran away from their abusive husbands, so he collaborated with Jim Hallam, the pastor of Asbury United Methodist Church to start the Peoples’ Emergency Center, an emergency homeless shelter and resource center for poor people. Bob came to see the lack of resources for the poor in his community as a systemic problem that started at the very top, so he decided that he was going to run for congress.

His candidacy as a Democrat in a district that had voted Republican since 1858 was a tremendous long-shot, but he won in 1974. Bob was able to maintain his incumbency in a conservative district for six terms despite having one of the most liberal voting records in Congress. He describes his relationship with his constituents in his book Middle Church:

When I voted for things like increasing the minimum wage, I went to the chamber of commerce and explained why I believed as I did. More often than not, their answer was: “Bob, we disagree with you, but we respect the fact that we know where you stand.” Especially in times of rapid change and perceived dangers like those in which we live today, people gravitate toward leaders with a clear sense of purpose and vision, even when they disagree with them. [204]

Some of Bob’s colleagues in Congress described him as the meanest Methodist minister they had ever met, because he refused to play along with the good old boy network. In his role on the Public Work and Transportation Committee, he ruthlessly attacked corporate welfare pork barrel spending, killing about $1.4 billion worth of government-subsidized “bridges to nowhere.” Bob hated waste and corruption, but he also refused to countenance the view that government could not possibly contribute any good to society, as he commented in his book:

Government is not the only means we have for making a difference… But government is how we express ourselves and our values as a people. It is often the single largest lever we have for moving large amounts of resources when circumstances call for them. It is the only institution capable of compelling corporations and individuals to observe the rules of fair play in the marketplace. And simply to write the government off, to concoct some false distinction by which the Bible deprives it of jurisdiction or relieves it of responsibility, is to surrender an important and often powerful means of helping the poor while letting politicians off the hook. [167]

Bob vacated his congressional seat to run in a losing race for the Senate against Arlen Specter in 1986. Since that time, he spent a decade as the president of the Claremont School of Theology in California, seven years as the secretary-general of the National Council of Churches, and most recently served as the president of Common Cause, a government accountability and campaign finance reform organization.

Bob wrote a sentence in his book that was very convicting to me: “Corruption isn’t nearly as big a threat to our democracy as corrosive cynicism” (221). Many Christians sanctify their cynicism in pious-sounding rhetoric about the inherent wickedness of humanity. This cynicism becomes very convenient when we’re talking about a corrupt political process from which we reap benefits. As an evangelical, I was taught that people aren’t serious Christians if they profess a faith in the goodness of people. It was actually Bob’s optimistic view of human nature that drove his ruthless expectations for our government to behave like a democracy and care for the poor. He describes his faith thus:

My church, my faith, is the one grounded in love, not fear, in hope, not hellfire. For me, God is a God of love. God isn’t telling us to love one another in exchange for a reward. God is telling us to do it because it’s right. I believe in God as a creator, but a creator who was smart enough not to undertake such an awesome task alone, who instead invited each of us to join in the ongoing call to renew the world. [27]

The mainline Christian tradition that Bob represents has been on the losing side of our national cultural argument for the past several decades. An apocalyptic nihilism of suburban privilege has become the predominant voice of American Christianity. It’s time for Christians to stop congratulating ourselves for being cynical about the possibility of good in our world. Whether our approach is to start grassroots faith-based community resource centers for the poor like Bob did in 1972 in Philadelphia or to join in Bob’s most recent project attacking Washington’s corrupt lobby culture to restore democracy to our government, we can honor the legacy of a true American prophet, Bob Edgar, by joining other human beings, Christian and otherwise, in God’s mission to renew the world.

April 24, 2013
How does a Wesleyan deal with predestination and election?
Next Post