Cut government spending, except when I have to wait in line

Cut government spending, except when I have to wait in line April 27, 2013 Morgan Guyton 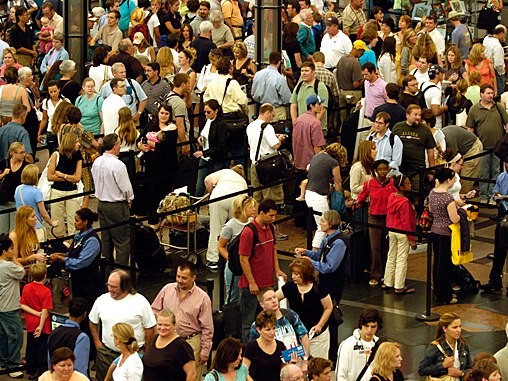 A number of people in my church have been impacted by the game of chicken known as sequestration that Obama and the Republicans are playing with one another. Almost everyone either works for the civilian sector of the government, a government contractor, or the military. Several people have lost their jobs; many have been furloughed. And that’s why I’m more than a little bit hot about the way that Congress has suddenly bolted in action to exempt the FAA from sequestration rules so that people won’t have to wait in line at airports. It’s an illustration of the uniquely American religious belief in ideology without consequences.

As increasingly we spend our lives more in the virtual world than the physical world, we grow increasingly ignorant of the nuts and gears in the background processes (to use a computer term) that actually run our world. What matters is that traffic keeps on moving and that my life is fast, cheap, and convenient. All of the crutches and puppet strings that make life fast, cheap, and convenient must remain behind the curtain because the engine that drives the whole economy is each American’s delusional belief in his/her own self-reliance.

So our federal government pays Iowa corn farmers to burn their crops rather than oversaturate the market with them. Our state governments have budget crises because they have waived the property taxes of every corporation that has come to their state to “build jobs.” As long as these things remain outside of my peripheral vision, then I can satisfy myself with myths about the magical efficiency of the invisible hand of the market, converting the self-reliant selfishness of millions of people into an altruistic utopia for all.

But God forbid that I should have to wait in line at an airport. The government needs to “make tough choices” and “face the sober truth” about its budgeting, but standing in line for six hours should not happen in a first world country full of self-reliant people like me who would sprout our own wings and jet-packs to fly around the country if we could. Guess what? There are hundreds of other hidden ways that the government touches our lives on a daily basis, but as long as we don’t see the impact of their spending cuts, nobody will complain and those invisible puppet strings will disappear so that something comes crashing down unexpectedly in the far-off future. What if spending cuts subtly erode the quality control in something like our waste-water purification system and we start drinking cancer out of our taps without knowing it? See no evil, hear no evil.

The only thing more irresponsible than making inflexible fixed percentage spending cuts across the board is to make decisions about spending according to the visibility of what’s being cut. The people who are going to get shafted the worst are poor kids from the country, HeadStart and Medicaid and food assistance programs in rural counties in Arkansas and Kansas. Poor kids in the city have more visibility. But the poor kids in the country can just suffer in silence while the rest of us go up and down the escalators at the airports with all the puppet strings and crutches in place that allow us to continue to call ourselves self-reliant and wonder why other people haven’t learned how to pull themselves up by their bootstraps.