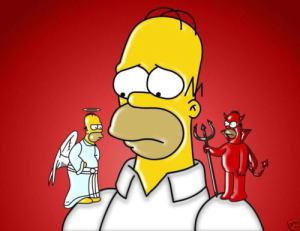 I had two very different conversations on my comment threads yesterday with people who disagreed with something I had written. In the first case, I was put on the defensive and became increasingly convinced that I was being judged unfairly. In the second case, I was disarmed and ended up conceding that I had made an irresponsible choice in how I worded something. Since I saw my own natural tendencies in the first approach, I thought it seemed like the opportunity for a teachable moment for me and perhaps you as well.

When I read something that I decide to argue with on the Internet, my default mode of engagement is to try to make the person who said it look as ridiculous as possible by pointing out their hypocrisies and demonstrating how their word choice is disingenuous. This is precisely how the first commenter engaged me on a post I wrote Monday about my experience when friends are converted into a theology that I can’t relate to.

I used the term “fundamentalist,” which was a loaded term that was unnecessary. I described how the theology of these friends (who are actually a real plural set of people that I actually do care about) looked like from my vantage point. The main thrust of my post was to describe the crisis of faith that I personally experience wondering if I’m worshiping a fake God when I see other people whose God seems to address their sin more effectively because He’s a lot “meaner” than the God I have encountered (not just in my personal fantasies but in my reading of scripture).

In any case, the commenter started off by saying (or rather insinuating sarcastically) that I couldn’t possibly be talking about people who were really friends because then I would have attempted to write them directly before saying anything on the Internet. Then he pointed out that the theology I was struggling with was precisely the theology of Methodist founder John Wesley, who must be a “fundamentalist” too by my assessment. He concluded with the following:

In the end, this sounds like a long re-enactment of Luke 18:11 – “The Pharisee stood by himself and prayed: ‘God, I thank you that I am not like other people—robbers, evildoers, adulterers—or even like this tax collector.”

So a post that I’d written in order to be vulnerable about my own uncertainties and say I had always thought I was called to fight fundamentalism but maybe I need to just live and let live ends up being construed as the exact opposite. The commenter felt like this wasn’t enough, so he added a second comment:

The other thing that strikes me about this post, along with many of the comments, is how much is made of one’s *feelings.* Rather than calling for one’s feelings to conform and submit to faith and God’s revelation of God’s self, it is posited that God conforms to our feelings, and His Word changes based on what motivates you.

Feelings? Hmm… I’m not afraid to acknowledge that I have them. And the irony again is that the point of my post had been to name my uncertainty about my own experience of God in light of the vastly different God attested by the “fundamentalist” (ex?) friends I was encountering. I wrote a series on this blog called “Five Verses God has tattooed on my heart.” The scripture that has seized me over the course of my life explains my understanding of who God is, not my “feelings,” even if I write a blog post in which I don’t have chapter, verse citations at the end of every sentence.

In any case, the course of my conversation with this first commenter was determined by a pretty scathing opening assault not just on my ideas but on my character. I call people “friends” whom I obviously don’t really care about since I write about them in the third person without having cleared it with all of them first. I’m not really a Methodist because I’m at odds with the theology of John Wesley. I’m exactly like the Pharisees I purport to be criticizing. And the God I believe in is a projection based on my feelings.

Here’s how the second conversation went differently. It started with a question regarding a phrase I had used in a prior comment, “the heresy of sexual normalcy.” The phrase was a sloppy overreach. I’ve written a lot about the way that sexuality does not function as innocently in suburban Christian culture as it’s purported to. It is ridiculous for those of us who are heterosexual to congratulate ourselves on the “virtue” of being “natural,” and I do think there is an undue moralization of gender complementarity that goes beyond Biblical warrant and reaches its most ridiculous caricature in wife-spanking culture.

But it’s reckless and unfair of me to say that Christians who are grappling with how to be Biblically faithful in a legitimately sexually broken society are nothing more than self-justifying heretics. And the reason I’m better able to admit that I was wrong on this point is because of how the second commenter engaged me. He didn’t once attack my character. He engaged me strictly on my point, which he disputed, while also showing me that he was trying to understand where I was coming from:

My guess is that you see this as a justice issue, with the need to change the church and society to provide acceptance and recognition for persons with same-sex attractions. If that is the case, then it would seem to me to be unfair to label as heretics those who are merely responding, simply because they are bringing “undue emphasis” to one dimension of Christian teaching.

It does a whole lot to show that you’re trying to understand where another person is coming from and it doesn’t require muting your criticism of the point that the other person has made. He could have made me look and feel a whole lot more ridiculous. Because he didn’t, I didn’t get defensive. The conversation continued and though we still disagreed, he was able to name a point of agreement:

I am totally in agreement with you that we need a much deeper, more full-orbed theology of sexuality. I agree that we need to explain what is going on with God creating the good gift of sexuality and how God meant it to be used, along with how our sinful nature corrupts the good gift and we experience brokenness. I have seen snatches of it, and I hear that Pope John Paul II’s Theology of the Body is very good, but I haven’t seen a good development of that theology from a Protestant perspective. We as a church need to be working on that.

In the end of the conversation, I felt like despite our disagreement on a very contentious issue that has wrecked so many friendships that this was a brother in Christ whom I could embrace as a friend if the circumstances allowed for it. And this wasn’t just any ordinary guy. He’s a higher up in the United Methodist Good News movement, an evangelical revitalization movement which is perceived as “the enemy” by many who want United Methodism to be LGBT-inclusive (and I’m not saying this perception is entirely unwarranted; I simply don’t know the story). Regardless, he’s still a Christian and he treated me like he thought I was actually a Christian too. And that actually makes all the difference in the world.

So I think what God had to show me in all this is you can express your disagreement with other people without attacking their character and making them look ridiculous. I can’t tell you how often I have argued exactly like the first commenter. It is rare that I have the patience and discipline to try to affirm the legitimate points that my opponent is making. But I know that when people do that with me, it’s way more effective because I feel safe enough to admit my mistakes and concede the legitimacy that I can affirm in the other person’s perspective.

I don’t think I can give up deconstruction entirely. It is prophetically necessary at times to point out hypocrisies and ways that words are being used disingenuously, which is what the first commenter was trying to do with me. But I think problematic dynamics and behaviors can be named without attacking people personally. And I also concede that deconstruction is dangerously vulnerable to a dishonest reductionism. Just because suburbia was initially created by white flight and evangelical purity culture seems like an echo of the paranoia about white womanhood and black male libido that justified segregationism doesn’t mean that the conscious convictions of individual Christians who want to be faithful to God’s teaching about sex can be summarily dismissed by sociological hypotheses.

So yesterday was a good learning experience for me. No hard feelings for anyone involved. God used all of it. I’m still going to call things out that need to be named unless God shows me that I was wrong about what He has called me to do, but I will work on my precision and charity in the claims I make and the labels I use. Mostly, I will try to listen to God more carefully before I claim to speak on His behalf. Romans 14:19 is a verse that I should tape to the top of my computer screen as I type these things: “Let us then pursue what makes for peace and for mutual edification.”

September 12, 2013 It's time for Mark Tooley to stop bullying Stanley Hauerwas and other pacifists
Recent Comments
0 | Leave a Comment
Browse Our Archives
get the latest from
Mercy Not Sacrifice
Sign up for our newsletter
POPULAR AT PATHEOS Progressive Christian
1