Daddy, is the devil real? 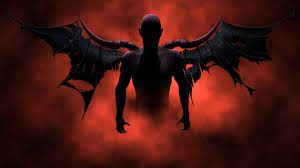 My sons wanted to tell spooky stories last night. Isaiah went first, then Matthew, then me. I was just making my story up as I went along. And they were editing my story whenever they wanted to add a plot twist. So because of an unexpected plot twist, I said that a character named Johnny must have been possessed by a demon. And Isaiah asked me what does possessed mean and what does demon mean. And so I said that demons are evil creatures sent by the devil. And he asked me who was the devil. And I said he’s the one behind all the evil in the world. And then he said but the devil’s not real, right?

Usually when we’re telling spooky stories, that’s the point where I offer the reassurance that no, the bogeyman or the chupacabra or the abominable snowman are just pretend. It’s kind of a ritual. He asks if the creature is real and I say no of course not, this is just a story. I guess if I were a good progressive Christian, I would probably say, “No, of course the devil’s not real. We live in a world that is scientific. We don’t believe in ghosts or demons or fairies or devils. When evil happens in the world, there’s always a biological or sociological explanation.” But I didn’t say that. I said yeah, he’s real. And then Isaiah said he was scared of the devil. And I said it’s okay to be scared of the devil.

Then he wanted to run downstairs and ask Mommy if I was telling the truth or playing a joke on him. So he ran downstairs. My wife was pretty flabbergasted with me for bringing the devil into a bedtime story. I really didn’t mean to. It was all stream of consciousness. My older son had put the plot twist in the story that made demon possession the only plausible explanation for a particular character’s behavior. When Isaiah asked his mother if the devil was real, she said not in the way you think. When that answer didn’t satisfy him, she asked him who’s bigger than everything else and filled with love. God, he said. Then she said he had nothing to be afraid of because God always protects us from the devil. And she told him that Daddy would be happy to snuggle with him until he fell asleep since Daddy was the one who put the devil in his bedtime story.

Whenever I preach about the devil, I always remind people that his name was never a proper noun in either Hebrew or Greek. In Hebrew, he’s the accuser. In Greek, he’s the one who throws things into chaos. There’s always the implication that when we say satan or diabolos we’re speculating about some mysterious stranger who does these things rather than talking about a historical figure whose identity is clearly documented and established. At the same time, I really do believe that somebody’s out there who’s behind the world’s evil. People really do seem to get possessed by something that baits and prods them into doing evil. When someone becomes a regular practitioner of evil, it seems to make the most sense to see them as being imprisoned or captive to one who is pure evil. We can’t just be reasoned out of doing evil. It’s not just a matter of getting the right explanation and changing our behavior. We need to be delivered from evil once we’re in its clutches.

To be honest, I’d be more scared of the world if I didn’t believe there was a devil. Because we have had some hideous things happen in our world. During the dirty wars in Latin America in the eighties, military torturers did incredibly horrendous things to other peoples’ bodies. Now, in Iraq, the ISIS terrorist group is literally crucifying its political opponents. If that kind of behavior is natural to humanity, then our world is an incredibly scary place. I have to believe that it isn’t natural, that there’s an evil one who possesses people, and that most importantly, they can be delivered from this possession and have their humanity restored.

Isaiah came into the room while I was typing this and saw the picture I included. He asked me if that was the devil. I said it’s just a pretend picture because the devil doesn’t look like anything since he’s just an evil spirit. Isaiah said he was still scared from the story last night. So I tried to explain things a little better. I said the devil is the little voice in your head that tries to get you to do bad things when you really don’t want to. Like when you lose your temper and throw toys at your brother. So whenever you have the thought that you’re so angry, you just want to hit somebody, that’s the devil talking. Just tell him to shut up and go away because you belong to Jesus. He kind of grinned a little bit. He said that the devil sometimes tells him to punch himself. And I said I was pretty sure that Jesus didn’t want him to do that. So we got through it. His first encounter with the devil at age five. Thanks to his tone-deaf, spooky story telling daddy. I think it ended well enough though. 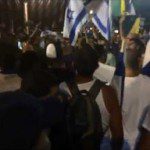 August 1, 2014
A song that shows how war can destroy your humanity
Next Post 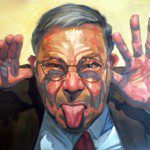 August 7, 2014 Ridicule is great clickbait, but is it good for Christian community?
Recent Comments
136 Comments | Leave a Comment
"Following the Bible's rules for "atonement".1) I steal your uninsured car and after a week ..."
C Nault Atonement: a basic explanation
""Years ago I recognized my kinship with all living beings, and I made up my ..."
ChristianPinko “All People Are Holy”: The Theology ..."
"That's beautiful."
Timothy Swanson My Light Blue Pink Messiah (a ..."
"As long as you believe in some uber demon you will always be fearful of ..."
JD Satan As The Virus of Enmity
Browse Our Archives
get the latest from
Mercy Not Sacrifice
Sign up for our newsletter
POPULAR AT PATHEOS Progressive Christian
1