I choose to live in a world where resurrection happens

During Lent this year, a Presbyterian minister named John Shuck posted on the Friendly Atheist blog about being a pastor despite the fact that he no longer believes in God. He shared that he doesn’t appreciate being told he’s not a Christian just because he doesn’t believe in God. In his view, God is a “symbol of myth-making and not credible as a supernatural being or force.” He views Christianity as a “culture” whose “artifacts” are “resources” to be used for the sake of “social justice, personal integrity and resilience, and building community.”

As I was reading his words, I wondered how many ministers out there are just playing along for the sake of “building community.” More convicting was the realization that too often I have lived as though I’m just playing around with cultural artifacts as a pastor. But the good news is that God keeps on throwing just enough mystery and coincidence into my life experiences that I could never deny his existence with any sincerity. That’s why I choose to live in a world where the man Jesus really was God and really did come back from the dead in a completely physical, scientific law-violating kind of way. I choose to live in a world where resurrection happens.

When I live in John Shuck’s world where religion is nothing more than a vehicle of human psychology to manipulate people into living out social justice and personal integrity, then all of the weight falls on me as a campus minister to deliver the goods. I have to be the salesman magician who gives incredibly inspiring speeches while also keeping things lighthearted enough that nobody gets offended. I have to be funny and charming while subtly making it clear that I’m completely down to earth and not trying at all so it doesn’t come across as creepy. I have to tell really good stories that don’t have any awkward details that might be off-putting to any possible constituency in the room. I have to watch all the right TV shows and figure out how to tie their episodes seamlessly into my sermon text.

I have to find the perfect images to make memes with so that my sermon series announcements will blow up on facebook and twitter and snapchat and yikyak and whatever new social media app that 37 year old campus ministers haven’t learned about yet. I have to schedule my events perfectly so that they don’t conflict with any festivals or social justice rallies or keg parties or sorority meetings or term papers or falling-outs with roommates. I have to figure out the perfect sweet spot in how aggressively I pursue people who have made the mistake of giving me their contact information.

If the whole thing is reducible to human psychology, I don’t stand a chance. I can’t compete with the bars, the gym, and yoga class. I can’t convince students to put aside the weekend homework they’ve procrastinated doing until Sunday evening to come out and sing songs, hear another twist to the story about how much God loves them, and receive a soggy, grape juice-stained piece of Hawaiian bread.

But there’s so much more going on than that. I’ve seen too many coincidences and too much serendipity for my religion to be reducible to human psychology. I’ve had too many conversations with students in which something from my past gave me the insight that I needed to say what was needed at the time. I’ve randomly run into too many students right after praying for them. I’ve had the Spirit “tell” me that I needed to go to particular locations where I found people who were wondering where they would find me. I’ve had homeless people share messages with me that spoke to situations they couldn’t possibly have known anything about.

Most recently I had a really cool inexplicable mystical moment on a trip our campus ministry group took to Dallas to visit the Missional Wisdom Foundation. On Palm Sunday afternoon, we spent some time at a Cistercian monastery close to the Dallas Fort Worth airport. I found a path where the monks had put out stations of the cross. When I’d walked back into the woods a bit, I came to a huge field. There I started praying and somehow I felt the presence of God in the wind that was blowing. I stretched out my hands to the side and the strangest thing happened. The branches of a nearby tree somehow wrapped themselves around my right ring and pinkie finger. For a moment, I was holding hands with a tree. It was completely bizarre. When I studied the branches in my hands a few minutes later, it was impossible to replicate what had happened. All I know is that I was overcome with a sense that God had been touching me through his creation.

I don’t understand why a tree would hold hands with me. But I’m choosing to live in a world where God actually makes things like that happen in order to touch us and let us know that we are safe in his arms. I refuse to say that every mystery of creation must submit to the laws of science and the common sense of reasonable people. I choose to believe that the same power that raised Jesus from the dead continues to move in our world in weird, unpredictable ways. I choose to believe that God is more than just “being” or some kind of vague love-energy-force that’s unobtrusive enough not to pose any conflict with physics. I believe that God is constantly plotting in our world in very real, tangible ways to build a kingdom of disciples.

When I live in the world where resurrection happens, I don’t have to be the anxious, desperate, wannabe salesman magician that I become when the world is sucked dry of all its divine mystery. I realize it makes me look nutty to have shared this story. It’s definitely not a good move if I’m supposed to be a mildly charming, uncreepy social justice and personal integrity promoter. But I’m going to hold onto that memory of the tree holding hands with me and pull it back out whenever my life feels impossible to remember that God has made things happen in my life that don’t make any sense at all just to show me that he loves me. Weird things are happening around us all the time. But we have to live in the world where resurrection happens before we start to notice them. I’m going to try to notice them more. 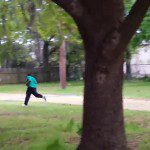 April 8, 2015 When people with power do not fear God
Recent Comments
27 Comments | Leave a Comment
"Perhaps the next pandemic cyclic will allow you to rethink your observations based on some ..."
Bob Shiloh Intuition and the Garden of Eden
"Good read, here is another interesting interpretation of the tree of knowledge and the fig ..."
Julie Why Does The Knowledge of Good ..."
"I believe the context has nothing to do with God condemning sin within or upon ..."
Joseph Kuzara How does God “condemn sin in ..."
"It's not about pro-/anti- homosexuality. It is neither your place nor mine to judge who ..."
Marc Wagner Can “Social Justice” Christianity Be Anti-Gay?
Browse Our Archives
Related posts from Mercy Not Sacrifice