A lesson in walking slowly 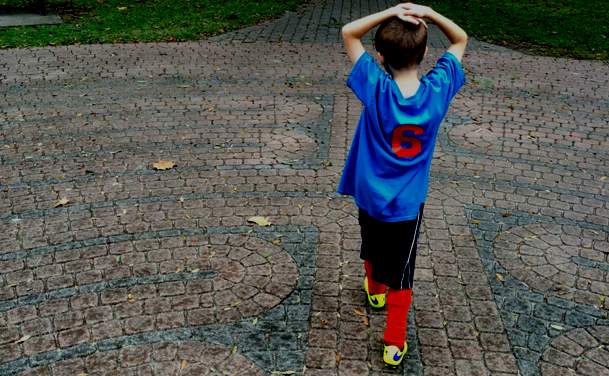 My son Isaiah and I have developed a tradition. Each Saturday after he plays soccer at the Fly along the Mississippi River, on the way back, we stop by Audubon Park’s prayer labyrinth. Isaiah has tended to understand the labyrinth like a maze: it’s a race to see who can get to the end first without stepping over any lines. But today when we got to the labyrinth, an older woman had arrived just before us. And she was walking SLOWLY. She had a pained look in her face that might have been grief and was at the very least deep spiritual need. And I thought oh my gosh, we’re about to ruin her sacred experience.

In all my time visiting the labyrinth, I’ve never seen another person actually walk it. People do yoga on top of it. People sit on the benches surrounding it to smoke and talk on their cell phones. Children draw cartoons in chalk on top of it. But I’m the only one I’ve ever known to actually walk it. And it’s always felt like a big shame that such an amazing spiritual resource is entirely neglected by a city like New Orleans, so Catholic and rich in sacred space.

I had planned on letting Isaiah run through the labyrinth and do his normal first grade maze race, while I walked slowly behind him with my prayer beads. But now I had to be a parent and pray at the same time. It probably would have been much easier if I had just told Isaiah he had to stay behind me. But I let him go first. I told him to go slow, and he was doing his best, but inevitably after 30 seconds, he was right behind the woman. So I told him to stop and wait. Over and over and over again.

Fortunately the way a labyrinth is structured, the path circles around itself so I was able to stop Isaiah and put my arm around him several times when he got too close behind the woman. It was an interesting challenge in contemplative parenting. If I had raised my voice with him, I would have been the one to disrupt the woman’s sacred walk. I had to be gentle, trying to catch his eye and put up my finger and my hand to say stop when he got too close. Or if he wasn’t looking, to snap my fingers at just the right volume so that my anxious energy wouldn’t disturb the woman. And I was doing all this while praying through my prayer beads.

We survived walking slow. It wasn’t as nerve-wracking as I initially thought it would be. I kind of wanted the woman to notice what a heroic job of parenting I was doing and say, “Don’t worry! He’s fine,” or smile at how cute he was, but she never did. I didn’t see her scowling either. She did leave after reaching the middle instead of walking all the way out which made me a little sad. But she did so without expressing any sense of frustration or annoyance. She just had the same sad, wistful look on her face. When she got to the middle, she paused a whole minute to pray. And Isaiah reached the middle behind her and immediately darted back out on the return path to the outside.

When Isaiah and I passed each other as he was coming back out, I realized that I had been given a teaching moment. I told him that even though he didn’t have to walk as slowly anymore, I wanted him to try something new. I said the labyrinth is more than just a maze where the goal is to finish first. I said it’s a place where people say the same prayer over and over again to feel God’s presence. So I gave him a prayer: “Jesus, I love you; thank you for taking care of me.” And I told him to whisper it over and over again as he was walking.

I heard him do it some. As he started doing it, my perspective shifted. I realized that if the woman had never been there, I wouldn’t have taught my son about contemplative prayer. How many years would I have continued to walk the labyrinth working my own prayer beads without teaching him anything? The woman was the master God had put in our path to show us both how to walk slowly. I needed to learn how not to freak out that my kid was going to annoy another adult and I would get judged for it. If the woman had reassured me in the banter-ish way that we parents like to reassure each other about our children’s excess energy, then I probably wouldn’t have learned the lesson.

As I backed away a little more from our lesson, I realized that God is teaching me how to walk slowly in all aspects of my life. I’ve been utterly uncontemplative in my role as a campus minister. I’ve been so desperate to recruit new people so that we can have a critical mass of community so that students who come to visit won’t say this is lame, I’m not coming back. I was super-anxious about the Halloween party we had last night, worried sick that nobody was going to show and it would be a total flop.

Our party was small. But it wasn’t dead or awkward. We had a somewhat corny Halloween playlist with songs like “The Monster Mash,” but nobody was scandalized. We decorated gingerbread Halloween houses. We played Clue and Apples to Apples. A few people bobbed for apples (mostly my two sons). Community is happening. Maybe it’s been happening this whole time and I was just too much of a basket-case to see it.

I’m realizing that I have been like my son rushing through the prayer labyrinth while God has been sending me signals and snapping his fingers for me to stop and wait. A year ago, we were doing lectio divina at a campus ministry retreat with the Beatitudes of Matthew 5 for our text. The phrase that God spoke to me was from the very beginning: “After he sat down, his disciples came to him.” Sitting down is such a terrifying thing to do when the world is always telling me that I could always be doing more marketing. If I invite 10 people, 2 are going to come, which means I need to invite 50 so that 10 will come.

I’ve had a beehive of voices in my brain telling me what a worthless parent I am, what a disorganized train-wreck I am, how uncompelling and uncharming I must be that I haven’t figured out how to draw a crowd on Sunday nights. But meanwhile God is quietly working. A community is happening. God is walking slowly behind me while I race through the labyrinth, longing to reach the part of the story where I’m able to look back and say, “Man, those first couple of years were rough but God was with me and look at us now!”

It’s so interesting how we learn what God is doing for us when we do it for our children. I don’t know how the hell to be a father. Often, I holler and harangue my boys in ways that are completely ineffective and unhelpful. But today I was a good dad. I was gentle and patient. My heart swelled up with love for my son as I got to see him learn a simple lesson. And in that space, I was able to feel the love of the one who has been patiently parenting me through the labyrinth of my life. He’s showing me how to walk slowly. And I’m starting to feel better. 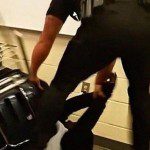