No, heaven and hell are not about afterlife insurance 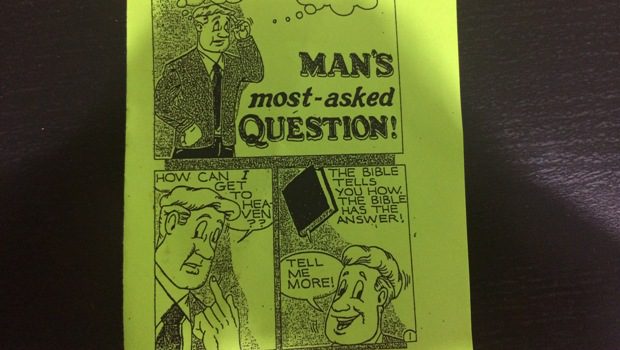 I was handed a tract last night on Tulane’s campus that gave me the answer to “man’s most asked question: how can I get to heaven?” The woman who accosted me with the tract was very aggressive. I told her I was a pastor. I tried to be polite. She seemed a little bit unsure of whether I was really a Christian when I said I was United Methodist. She was sincere and friendly enough. I’ve been trying really hard to love people like her. Normally I ask if I can pray with them for their ministry even though I think what they’re doing is destructive and sabotages the relationships I’m trying to build with students. But last night I just wasn’t feeling it. I don’t think she’s a horrible person, but the afterlife insurance gospel within her tract is the foundation of toxic Christianity.

Afterlife insurance is what the gospel looks like when it has been shaped by worldly market forces into a consumer product. It’s probably the most successful pyramid scheme of 20th century American society. It casts humanity’s problem in strictly capitalist terms. God is the universe’s moral banker. He is owed a debt for humanity’s sin. So Jesus can pay the debt on the cross for those who believe. Or people who don’t believe can repay their debt by being tortured forever in hell. The way to be insured against the debt of sin is to accept the Jesus payment plan. It’s just another transaction you add to the checklist of middle-class security, not much different than any other type of insurance.

It’s not entirely clear what has to be done to “accept” Jesus. In the sidewalk tract, a man says, “I’ve always believed in Jesus. I’m not a heathen you know.” But the tract explains that “believing in” Jesus is not good enough unless your belief “is a total commitment to Christ.” So you have to surrender to Jesus in a really emphatic way or else it might not be a “total commitment.” The back of the tract further clarifies that you’re not “totally committed” unless you “repent” of your sin, which means you don’t sin anymore (?), except not exactly, because not sinning can’t be a precondition of salvation, or else that would be works-righteousness. The tract also says, “Please notice, you cannot work your way to heaven!”

The primary logical failure of the afterlife insurance gospel is that “accepting Jesus” becomes the works-righteousness that gives Christians a heavenly hand-stamp, whether it’s an emphatically earnest sinner’s prayer or a sinless life that proves your “total commitment to Christ” or the ambiguous place in between. If salvation consists in something that must be proved to a God who says it’s good enough or it isn’t, then whatever the proof, it’s a form of works-righteousness.

Paul says in Ephesians 2:8, “For by grace you have been saved through faith, and this is not your own doing; it is the gift of God.” If grace is in fact an unconditional gift from God, then that gift is unilaterally offered to all regardless of their response. If God damns people to hell who don’t respond according to a particular prescribed formula to his grace, then their response is what saves them, not God’s grace. The Calvinists get around this by saying that God pulls puppet-strings to make the elect respond to him the right way and make the damned respond to him the wrong way, which takes an already ugly presentation of the gospel and makes it even uglier.

There are zero examples in the New Testament of the modern afterlife insurance gospel being used in evangelism. Neither Jesus, nor Paul, nor any other apostle ever go up to strangers on the street and ask them whether they think they’re going to heaven or hell after they die. The afterlife insurance gospel sews together a selective patchwork of scriptures filtered through a pre-decided consumerist agenda. “How can I get to heaven?” is the same type of anxious middle-class question as “How can I get my son into Harvard?” or “How can I structure my investment portfolio to have a comfortable retirement?”

When we look at how Jesus and the earliest apostles actually engaged people, the focus is not on the afterlife but on entering God’s kingdom here on Earth. The few places where Jesus references a final judgment, he condemns the very self-centeredness that the afterlife insurance gospel validates. According to Jesus, people go to hell when they selfishly neglect the poor and marginalized (Matthew 25:31-46, Luke 16:19-31), a selfishness which is often justified by inventing an easier morality to obey and a formulaic method for sealing the deal on your eternal destiny.

Throughout the book of Acts, Christian salvation is about escaping the imprisonment of sin and joining an amazing movement of people who have received the power of the Holy Spirit. In Acts, people are not converted to Christianity by hellfire and brimstone sermons but by seeing the Holy Spirit move. It’s true that part of how we escape the imprisonment of our sin is through Jesus’ payment of its debt through the cross. But insofar as the cross is a debt payment, its purpose is to persuade us that God’s forgiveness is legitimate and authentic, not to convince God to forgive us.

In the most important conversion story of Acts, Saul of Tarsus is saved when Jesus comes in a blinding vision to ask him, “Saul, why do you persecute me?” Jesus doesn’t say, “Saul, if you died tonight, would you go to heaven or hell?” Nothing about the story indicates that the primary thing Jesus saves Saul from is an afterlife of torture. What’s most important about Saul’s salvation and transformation into the apostle Paul is his spiritual detoxification through both justification and sanctification.

We don’t need to be saved from the inflexible economics of an infinitely fastidious God. We need to be saved from our own stubborn need to justify ourselves, which is the way that our sin entraps us. When Christians think that salvation is an afterlife insurance policy, they can remain entrapped by their defensive self-justification, which puts them in a far worse position than someone with no exposure to Jesus. They think they’re saved already, but if they haven’t learned how to genuinely embrace their identity as a redeemed sinner living under God’s mercy, then they are immunized against salvation.

We don’t need to be talking about hell as an afterlife punishment, because our sin-shattered lives are hell enough themselves. Hell is being so tormented by anxiety and shame that you have to lobotomize yourself with drugs and alcohol in order to interact with other human beings. Hell is being so entitled that you spend your life in a permanent rage because of all the ways that the world refuses to treat you like royalty. Hell is always needing to be the most important person in the room and hating the world when anybody else is getting more attention. Hell is taking your phone out every two minutes to see how many people liked your most recent facebook post.

Those are just a few hells that I’ve known in my own life. There are far worse hells that people with way harder lives than mine have suffered. In John Milton’s Paradise Lost, the tortured Satan says, “Which[ever] way I fly is hell; [I] myself am hell.” In other words, if we live in hell, we carry it with us wherever we go, even into whatever reality we enter after we die. I remember going to a party my senior year of college when I was deeply depressed. Everyone around me was having a great time, and it was complete torture for me. That’s when it hit me that heaven and hell are the same party, the same eternal banquet with God experienced as perfect joy or absolute torture, depending on how we have been shaped. Standing in the presence of perfect goodness, beauty, and truth will either be euphoria or horror.

Our hells are never completely our fault. Many hells are the product of radical injustice that makes the air boil with wrath. The wrath of our collective injustice is what gets crucified into Jesus on the cross. As the eternal victim of all of our sin, only Jesus has the credibility to reach into our hells and gently take us by the hand into heaven, a place where truth and love actually reign because all who live there live under mercy. Only a crucified God can show perfect solidarity to every sinner and every victim of sin.

I don’t know what heaven is because I haven’t yet been fully saved from hell, but when I dream about heaven, this is what I imagine:
a place of perfect belonging and perfect authenticity
where everyone trusts and appreciates each other
where nobody needs to be in control since we are all sheep in our shepherd’s arms
where difference is embraced as essential beauty
where nobody is afraid to speak their truth
where we all dance wildly, not caring how we look
where mistakes, if they happen, are immediately owned and embraced as learning
where humble gratitude fills the air with a palpable warmth

I could go on and on. I hope it’s clear that I believe heaven and hell are both very real. Most simply, heaven is communion with God, while hell is alienation from God. Do they occur in absolutes or degrees? I’m not sure. I don’t know how the Muslims, Hindus, Buddhists, Zoroastrians, atheists, etc, cope with the hells that are inherent to human existence. I do know that I need to be saved from my hells, and I know that Jesus is the one doing it, because he puts all of my ugliness on his cross so I can be resurrected with him. So yes, there’s a much better way of talking about this than a tract that puts it in terms of afterlife insurance. 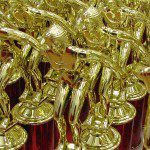 April 21, 2016 The great spiritual battle of the 21st century
Recent Comments
0 | Leave a Comment
Browse Our Archives
Follow Us!