Religion is the only hope for the American church

I just finished breakfast with a man who has been one of my most important influences, Brian Zahnd. He is at the forefront of what I see as one of the most exciting movements in the American church, what might be called ecumenical charismatic sacramentalism. I’ve already blogged about Brian’s story as he tells it in his latest book Water to Wine. Over breakfast today, he made a profound prophetic statement that I believe to be true: “Religion is the only hope for the American church.” (This is basically the argument of my chapter “Temple Not Program” in How Jesus Saves the World From Us.)

I understand that to many people, this seems like an utterly ludicrous statement. In the evangelical world, we’ve been defining ourselves against “religion” for decades. We say things like we believe in a relationship with Jesus instead of a religion about Jesus. Or that Jesus > religion. But when people talk negatively about “religion,” they’re usually not talking about what Brian means by religion. They’re talking about things like institutional bureaucracy and church hierarchy. What Brian means by religion is intentional, traditioned spirituality. In other words, rituals we perform on our own and together that provide a spiritual foundation for our lives. Without religion, Christianity is nothing more than an ideology that will only have power as long as it validates the ethos of a critical mass of people, whether they love “social justice” or “family values.”

A lot of people in our country have adopted the label “spiritual but not religious.” I didn’t realize it in the past, but this term actually originated in Alcoholics Anonymous. AA is a space where people can have a spiritual encounter with God without getting tripped up by the particularities of theological doctrine. The irony is that AA is entirely religious. The twelve steps are the epitome of intentional, traditioned spirituality. If you study them, they actually comprise the justification (1-3) and sanctification (4-12) of Christian salvation. They just aren’t grounded explicitly in a particular theological narrative. Now don’t get me wrong. As a Christian, I believe that the best possible religion emerges from the particular theological narrative of the life, death, and resurrection of Jesus Christ. But we need religion in addition to theology if we want to gain the divine union that is salvation.

The critical error of American evangelicalism and Protestantism in general is to think that doctrine can substitute for religion. We import this assumption into our teaching that we are justified by faith and not by works. The “faith” part becomes “believing the right things about God.” The “works” part becomes “all those rituals Catholics and mainliners do to earn their way into heaven.” So while Catholics go to mass and do their rosaries, we live out our faith by arguing about theology on the Internet.

Yes, that’s an oversimplification, but the greatest heresy that has emerged in modern Protestantism is rationalism. Our love of doctrine (and arguing about it) has made our Christianity a thing of the head and not of the heart. Instead of prayer, we love reading books that say the right thing about God which we highlight and fill with exclamation points in the margin. To love reading and talking about God isn’t a bad thing at all, but it’s only spiritually useful if it leads us to prayer.

Growing up Southern Baptist, I was indoctrinated with a negative view of “ritual.” What “ritual” meant was going through the motions of worshiping God without a personal emotional investment. We thought that because people weren’t dancing in the aisles at Roman Catholic masses, they must have been utterly bored and spiritually absent while the same words were being read week to week. We thought that the energy and enthusiasm of a contemporary worship service meant that the Holy Spirit was more present than when people sang solemn, boring hymns.

In my adulthood, I’ve learned that my spiritual survival depends upon the practice of rituals. I have an eclectic set of rituals that I’ve drawn mostly from Orthodox and Catholic spirituality. I pray the Jesus prayer and Lord’s prayer in Greek while going through the beads of a Catholic rosary. I fast on Mondays and Fridays. I go to as many weekday morning masses as I can both at my neighborhood Catholic church and the Episcopal cathedral in town. When I’m not praying with my beads, I use about eight different lines in Hebrew from the psalms as mantras that I say over and over again. These practices are my religion.

I don’t believe that religion has to be uniform, but I do think it needs to be handed down. I need to say words that have been given to me by Christian tradition, usually lines from psalms or prayers derived in some way from scripture. I can’t just look in a mirror like Stuart Smalley on Saturday Night Live and say, “I’m good enough, I’m smart enough and, doggone it, people like me.” It’s never done anything for me to make up positive, feel-good things to say about myself. It just feels like a farce to make up the words for my own mantra. It’s giving myself an authority that I don’t really have. I pray extemporaneously all the time, but the prayers that shape me are the prayers that were given to me.

I can’t explain why, but there’s an inimitable power in saying words that have been said for centuries. I’m coming to believe that the primary purpose of scripture is to give us liturgy for our daily lives. It’s not so much that we flip through the Bible as a reference manual whenever we have to decide which job offer to accept, which camp to send our kids to, or which car insurance to buy. We read the Bible to shape our prayer life so that we gain a deep enough intimacy with God that we can hear the still, small voice tell us where to go.

I’ve spent a vast majority of my life focused on learning ideas about God rather than cultivating a relationship with God. One of the most damaging though well-intentioned disservices we do in evangelical Christianity is to tell people it’s easy to pray since it’s “just talking to God like you would with a normal person.” I don’t think God despises it when we “babble like the pagans with their many words” (Matthew 6:7). God is always reaching out to us in love, so he will try to connect with anything we do to seek him. But I’ve never found the still, small voice using “Jeezuswejus” prayers. Not in the same way that I have through fasting and liturgy.

It seems analogous to trying to climb up the side of a cliff. We can try throwing ropes as high as they will go and hope that they catch on something so we can get pretty high. Or we can carefully build a ladder through years of religious practice in which the results are slow enough that we don’t notice until one day we look back and realize we have been completely spiritually transformed.

Without religion, Christianity is only one way among many to create hype and synergy through shared ideology. It’s just another pep rally that will last as long as charismatic cult of personalities around which its megachurches are built. Christianity cannot survive if it’s just a community service organization with a weekly inspirational speech and praise singalong.

What our utilitarian, secular world needs is religion. Not the Christendom of legislated morality that so many evangelical Christians have pursued ferociously because they don’t have religion. But a life of prayer upon which every other aspect of life can be built. A life of Eucharist.

Check out more in my chapter “Temple Not Program” in How Jesus Saves the World From Us! 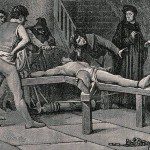 April 29, 2016
Is punishment the primary vocation of a bishop?
Next Post