Conservative United Methodist scholar Ben Witherington’s recent rant in the United Methodist Clergy group was the latest volley in our denomination’s escalating battle over LGBT issues. Witherington accuses Adam Hamilton of “setting our house on fire with bad theology and bad ethics.” He then proceeds to use Matthew 19 as a proof-text against LGBT identity, which I consider to be a move of exegetical malpractice. Though we often have to extrapolate scripture to address ethical considerations that it doesn’t confront explicitly, we cannot manipulate Jesus’ words to definitively answer questions that he wasn’t asked.

So let’s look at the whole passage of Matthew 19 to consider what Jesus did and didn’t say:

Some Pharisees came to him, and to test him they asked, “Is it lawful for a man to divorce his wife for any cause?” 4 He answered, “Have you not read that the one who made them at the beginning ‘made them male and female,’ 5 and said, ‘For this reason a man shall leave his father and mother and be joined to his wife, and the two shall become one flesh’? 6 So they are no longer two, but one flesh. Therefore what God has joined together, let no one separate.” 7 They said to him, “Why then did Moses command us to give a certificate of dismissal and to divorce her?” 8 He said to them, “It was because you were so hard-hearted that Moses allowed you to divorce your wives, but from the beginning it was not so. 9 And I say to you, whoever divorces his wife, except for unchastity, and marries another commits adultery.”[a]

The question Jesus was asked is whether it’s lawful for a man to divorce his wife for any cause, which was the teaching of the law of Moses. The reason that Jesus cites the creation story in Genesis 2:24 is to establish the fact that a man and his wife become “one flesh” when they are joined together. Jesus reveals the purpose of his scriptural citation in the next sentence, “Therefore what God has joined together, let no one separate.” If a man and his wife are indeed made into “one flesh,” then a woman cannot be cast away to be a beggar for the rest of her life when she’s found to be barren and unable to produce heirs.

The point of the passage is to deal with the question of divorce. Indeed it’s interesting that Witherington brings up this passage as an argument in a denomination which has more than a few clergy who are divorced for reasons other than marital infidelity. There is no ambiguity in the Bible’s teaching on divorce. But our denomination has chosen to take a gracious stance toward divorced clergy. It’s a sin, but not one that requires the termination of a pastoral vocation. We do not agree with the Roman Catholics that people who remarry after a divorce are in a state of perpetual sin and cannot receive communion.

After Jesus describes the way that marriage makes two people “one flesh,” he presents celibacy, or being a “eunuch” as the preferred option, recognizing that “not everyone can accept this teaching, but only those to whom it is given.” In other words, celibacy is a higher calling that only a few will be able to take on.

It’s true that Jesus quotes the part of the Genesis that says God “made them male and female.” But nobody was asking him whether or not two men or two women could become one flesh in the same way that a man and woman do. And he certainly didn’t present celibacy as the solution to same-sex attraction. It’s a calling for a small subset of humanity regardless of their sexual orientation, but not a punishment.

For about 90% of humanity, male and female are joined together as one flesh. About 10% of humanity are unique, whether it’s in terms of their sexual orientation or gender identity. One category of unique identity that even the most conservative evangelicals cannot deny are the 100,000+ people who are born intersex every year, meaning that they are anatomically neither male nor female. If you’re intersex, you cannot possibly conform to gender complementarity no matter who you marry.

So what would Jesus say to an intersex person or any other type of queer person about marriage? We simply don’t know. The prescription that he gives in Matthew 19 is about divorce, not about the gendering of marriage. It’s true that he uses the normal default of male and female as part of his argument, but he just isn’t making the argument that the normal is normative.

Jesus has a habit throughout the gospels of standing up for people who are misunderstood and judged because they’re social outsiders. Whenever I think about what position Jesus would take on same-sex marriage, I think about the way he stood up for the woman who anointed his feet in Luke 7 and commended her simple, completely socially inappropriate act of love as the highest form of hospitality.

No, it doesn’t prove anything. But the most we can say about Jesus’ position on queer identity is that we simply do not know. To say otherwise is exegetical malpractice, which results in bad ethics by promoting discrimination that isn’t explicitly sanctioned by Jesus. So everything Ben Witherington says about Adam Hamilton can be applied to his own use of Matthew 19. 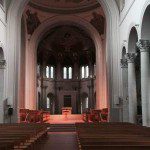 April 30, 2016
Religion is the only hope for the American church
Next Post 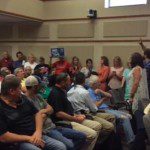 May 3, 2016 Now even "Jesus loves me" has been weaponized
Recent Comments
0 | Leave a Comment
Browse Our Archives
get the latest from
Mercy Not Sacrifice
Sign up for our newsletter
POPULAR AT PATHEOS Progressive Christian
1

Zooming Into The Future
My church, Crooked Creek Baptist Church, has announced its plans to resume...
view all Progressive Christian blogs
What Are Your Thoughts?leave a comment
Copyright 2008-2021, Patheos. All rights reserved.
error: Content is protected !!