Just remember that Dubya and Hillary belong to the same church

They’re both United Methodist: Dubya and Hillary, two of the most hated politicians in America. I love this photo. It almost makes me weep to see how relaxed and genuine both of them were in that moment. What if neither of them are as diabolical as they’ve been made out to be? What if they both go to your church? Actually, that’s not even a question. They do both go to your church.

Dubya is the chair of your United Methodist Men’s group. He believes in the American Dream, and he likes connecting the young adults in your church with jobs in his industry. He’s always handing out his business cards and telling people to send him a resume. He always has a twinkle in his eye, and he loves to tease people at the fellowship coffee after worship. He pretends to be unintelligent, because that’s part of the blue-collar shtick of Texas businessmen. But he’s actually really savvy when it comes to helping people use their talent effectively.

Hillary teaches your Sunday school class on the social principles. She’s very dedicated and serious about her work. Sometimes people take her the wrong way because she speaks very bluntly at the ministry council meetings and she asks very uncomfortable questions. She grew up in the midwest so she hasn’t quite figured out how to pull off the southern charm thing. She’s just a little bit too cerebral. But she’s an encyclopedia of knowledge. She’s not the most chatty person in the room at the fellowship coffee, but she will geek out over complex policy matters if you ask her the right question. And she’s passionate about making sure that the church is involved in ministry with the poor.

You’ve got both of them at your church if you haven’t driven them away. United Methodism is the only Protestant church left that’s big enough for both Dubya and Hillary. All the other denominations have split along political lines. We will probably end up splitting too. I’m tremendously torn about it. I want that picture of Dubya and Hillary hugging and laughing to be what United Methodism looks like. But I’m not willing to sacrifice the lives of my LGBT students who are called by God to ordained ministry. I wish there was a way for us to stay together without the need to control people who disagree with us.

Anyway, I need to remember and be grateful for the Dubyas and Hillaries in my life. My grandpa was a lot like Dubya. He was a south Texas farmboy turned oil tycoon who loved people and had the biggest heart of anyone I’ve ever known. He was way smarter than he pretended to be. He just didn’t want anyone to think he was highfalutin. I’ve known a lot of Hillaries in my life too. I’m kind of married to one, though there are plenty of ways in which my wife is different from her. Can we hope for a society where the Dubyas and Hillaries will be valued for their gifts and vocations rather than demonized opportunistically by cutthroat partisans? Can we hope for a church that will love people wherever they fall on the political spectrum?

October 13, 2016
The religious right needs to repent, not rebrand
Next Post 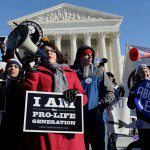 October 17, 2016 What if God wants the pro-life movement to lose the Supreme Court forever so they can act like Christians again?
Recent Comments
0 | Leave a Comment
Browse Our Archives
Follow Us!

Progressive Christian
Why Isn't Perfection In Love Good Enough For...
Mercy Not Sacrifice