In the Washington Post this week, white evangelical millennial leader Katelyn Beaty said, “I can’t defend my people. I barely recognize them.” 81% of white evangelicals voted for Donald Trump. As Trump begins to fill his leadership team with boldly open white supremacists like Steve Bannon and Kris Kobach, white evangelicals like Beaty are right to be horrified, whether or not they voted for Trump. This calls for a season of introspection, because I think the different oppressions white evangelicals have historically supported are coming from the same basic ideology. I want to talk about something we call intersectionality in the activist community.

Intersectionality refers to the way that oppression doesn’t happen in isolation. Different oppressions intersect with one another. Sometimes they add onto each other, like in the case of a black transwoman who has to navigate racism, misogyny, and transphobia all at the same time. Other times, their relationships are more complex, like white women who are oppressed by misogyny and respond with racism.

But I’d like to talk about intersectionality from the vantage point of the oppressor’s ideology rather than the experience of the oppressed, which I can’t really speak to. Basically, I think there’s a common thread in all the ideologies of oppression that my people have used over the last five hundred years. And I want to start five hundred years ago with a debate between the Spanish theologians Juan Gines de Sepulveda and Bartolome de las Casas about what should be done with the natives in the New World. Sepulveda argued that natives should be “civilized” by the Spaniards through their enslavement (or massacred if they refused). Las Casas argued that native culture had inherent dignity and should be treated with the same respect as any European culture the Spaniards interacted with. We all know who won that debate, but the ideological foundation is what’s relevant.

Sepulveda’s view was shaped by a concept he called el ordenimiento de mandar y obedecer (the order of command and obedience), which he believed to be the essential foundation of civilization. Without this hierarchical order in which each person stayed in his/her place, society would fall apart. Sepulveda pointed to the passage that Christians today call the Great Commission where Jesus says, “All authority on heaven and earth have been given to me” (Matthew 28:18). He argued that because the Spanish king was a Christian, he received Jesus’ authority over all the earth by extension, which meant that non-Christian people were rightfully under his authority.

Las Casas’ line of argument took an entirely different shape. Though he did reference Christian scripture, the heart of his argument was his testimony about the sacred practices of the natives he had gotten to know. He claimed that their religious practices, even those involving human sacrifice, showed that they had a concept of the divine, and thus they shared inherent human dignity, no matter how strange or problematic their customs were. Las Casas still wanted to share Christianity with the natives. But he didn’t want to impose it on them. He wanted to share the gospel in a way that respected their dignity. And he didn’t believe that Jesus’ authority gave Spaniards the right to confiscate native lands or enslave them.

So for Sepulveda, healthy humanity depends upon its conformity to a hierarchical order in which it’s clear who commands and who obeys. For Las Casas, healthy humanity depends upon our ability to recognize the unique inherent dignity of each individual human. Order vs. dignity. I really think that’s the core of every debate we’ve had in Western civilization for the past five hundred years over how to treat marginalized people.

If you look through the historical ideological justifications for patriarchy, white supremacy, and heteronormativity, you’ll find a consistent appeal to order. We couldn’t have women in the workplace for the same reason that we couldn’t have black men dating white women for the same reason that we couldn’t have two women getting married. It disrupts the order that society depends upon to function. Sure, everyone flips open the Bible for proof-texts, but when you read the Bible looking for appeals to order, that’s what you find. The way that Sepulveda twisted the Great Commission into a justification for colonialism is no more of an interpretive leap than using Jesus’ teaching against divorce as a prescription for heteronormativity.

The Bible looks completely different whether you read it looking for order or dignity. Consider a famous passage that has been abused so egregiously in evangelical purity culture: “Don’t you know that your body is a temple and the Holy Spirit lives within you?” (1 Corinthians 3:16). If everything in the Bible is about order and obedience, then it’s obvious that this passage is about how adolescent girls should wear extra large t-shirts over their one-piece swimsuits at youth group pool parties so their cleavage won’t show.

But imagine if a transgender person opened the Bible to this passage with fresh eyes that had somehow avoided all the toxicity of evangelical purity culture. What could it say to someone reading the Bible looking for dignity? You’re beautiful and divine. It seems heretical for me to even write that, though it’s the plainest meaning of those words. It’s absolutely mind-blowing to think that our bodies are sacred temples where the Holy Spirit lives. That’s incredibly empowering.

We read in the next verse that “if anyone destroys God’s temple, God will destroy that person.” For the order-seeking hermeneutic, the meaning is obvious. Don’t modify anything about your body surgically which would be “destroying” God’s temple, since the “truth” of your body is whatever can be adjudicated externally by authority figures, not the mysterious mixture of chemistry, psychology, and anatomy that actually is your reality.

But for the one who reads the Bible looking for dignity, getting “top surgery” or “bottom surgery” is no more destroying God’s temple than getting braces or fixing a deviated septum in your nose. Why couldn’t Paul’s words be a warning to oppressors who attack other peoples’ temples since they don’t fit into our order? What if God destroys those who attack other peoples’ bodies whether physically or psychologically? What if people who disrespect the inherent dignity of others are handed over to the monstrosity of their sin?

The white evangelical church is in desperate need of introspection as we face the disaster of the next four years. What kind of humanity does God want to create among us? Does God want to “make America great again” by restoring the hierarchical order in which white men are the authority figures they have been for the past five hundred years of colonial Christianity? Or does God want a humanity in which every person’s dignity is treasured in its irreplaceable uniqueness? Order is a lot easier on those who put themselves in charge than dignity is; all they have to do to be “holy” is to police others. Tremendous spiritual discipline and holiness is required to create a community where everyone’s dignity is valued.

When we read the Bible with a dignity-seeking hermeneutic, then all the clobber passages fall away, whether they’re anti-black, anti-woman, or anti-queer. When the point of biblical ethics is to promote human dignity, the point of Leviticus is to prevent sexual violence through the use of taboo. The point of Romans 1 is to show how idolatry produces injustice through the cultivation of toxic spiritual fruit. The point of 1 Corinthians 6 is to compare filing lawsuits against fellow believers to drunkenness, theft, temple prostitution, and other more obvious forms of sleaze.

The next four years are going to be ugly. But my prayer is that whatever monstrosity they produce will annihilate any last shred of credibility that 500 years of toxic colonial Christianity still has, so that people who look like me will finally be overthrown. Our church will probably look like the wreckage of the European church before this is over. But I dare to hope that Jesus can save us from ourselves and make Christians into people who fight for the dignity of every human identity. 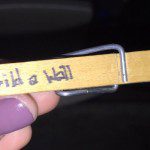 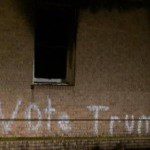 Top Ten Reasons NOT to Go...
The Desert Sanctuary
Related posts from Mercy Not Sacrifice