Why I wish Donald Trump would read my book

Why I wish Donald Trump would read my book April 18, 2017 Morgan Guyton

If I’ve learned one thing in the year since I released my first book, it’s that I’ve got more Donald Trump in me than I’d like to admit. My particular version of mediocre white male messianism was to try to make American Christianity great again through a book that wasn’t a total flop but definitely wasn’t the bestseller I dreamed it would be. In order to mark the one-year anniversary of my book release, I thought I should write another post about the book to inch my way closer to the publisher’s sales goal that is probably out of reach. And since Donald Trump is good for clickbait, I figured I would speculatively psychologize about what he (and a nation of people like him) could get from each of my book’s chapters.

What makes Donald Trump and people like him (and me) toxic is that we’re constantly performing. What Donald Trump needs to hear more than anything else is the voice that tells him God delights in him and wants him to share in that delight. For many Christians, worship is a performance by which we prove our zealous devotion to God. But the worship that saves us is an encounter where we lose ourselves in God’s delight. A life of performance is hell; a life of worship is heaven.

In another century, a man born into privilege like Donald Trump would be expected to care for the less fortunate. That was how the aristocracy in feudal society legitimized itself. But that doesn’t fit into the American myth of middle-class meritocracy. Everyone in America, no matter how rich, is supposed to have a rags to riches story of self-creation. Sacrifice is the core virtue of our national myth, and it’s the basis for white rage against immigrants who “didn’t wait in line,” blacks who “live off the government,” and every other invented category of people who haven’t “sacrificed as much as we have.” Jesus’ sacrifice on the cross is supposed to save us from the toxicity of sacrificial meritocracy and make us into people who live under God’s mercy and become God’s mercy in the lives of others. Those who build their lives around the ideology of sacrificial meritocracy have not yet put their trust in Jesus’ sacrifice and thus remain damned.

Donald Trump is probably the most unapologetically immoral president we have ever had. He’s also the most emotionally volatile. But as quick as we are to wag their fingers at his reactionary volatility, isn’t his personality just a distillation of what all of us get sucked into on social media? What our age desperately needs is a rediscovery of the ancient spiritual path of contemplative asceticism. Our hearts need to be emptied so that we can be filled with the gentle, patient wisdom of the Holy Spirit. I think this requires a radical shift in our understanding of holiness. The goal of holiness is not to be clean in a morally legalistic sense, but to be empty and thus available for mystical connection to God.

Donald Trump does not drink alcohol or smoke, but his life is proof that these forms of physical sobriety are not enough. Perhaps his addiction has taken the form of the many women’s bodies he has fondled over the years. Or all the worldly accoutrements of his various golf clubs and luxury hotels around the globe. Imagine how different a man he would be if he sought the intimacy with God that is true life. Fleshly decadence without the breath of God is like rotten meat. It’s not that physicality as such is evil; it’s that physicality without the divine breath is not life.

Trump is the exemplar of an age without honor. Honor is supposed to be the core virtue of conservatism, valuing truth for its own sake even when it’s unpopular and costly. But when conservatism is sabotaged by the reactionary scorn of an outrage industry that exploits white rage for profit, it loses its honor, and a man like Trump becomes its embodiment. Honor begins with a right understanding of God’s authority. A God whose authority is simply brute power may bring about compliance through terror, but he does not inspire honor. That’s why Christians need to recognize Jesus’ cross as the basis for God’s authority. Jesus has authority over humanity as the crucified victim and judge of our sin. Truth is as fragile and powerful as a crucified man. Those who live with honor are delicate with the truth, because they understand that dishonor crucifies Jesus.

Honestly I’m not sure how my chapter on scripture would be helpful to Trump since he doesn’t read books. But perhaps if he understand the Bible as poetry to inspire worship rather than a rulebook to impose control, then he would flip through his Bible to look for the many retweetable gems it holds.

Though Trump has no interest in any form of correctness, his election is an indictment of the theological correctness of the white evangelical demographic whose support was the cornerstone of his victory. In any case, I think the basic alienation that drives all postmodern rage, whether “liberal” or “conservative,” is our lack of communion with God. Thus, a key antidote to our present malaise is a recognition that Christian doctrine exists for the sake of deepening our communion with God rather than simply being correct.

Trump likes shiny things but only because they represent wealth. If he allowed himself to experience sacred space, he might be able to stay off twitter for 24 hours after that. Many churches today have a similarly pragmatic relationship to shiny things. Our sanctuaries are filled with gadgetry designed to make us look cool and up-to-date. We have filled up our churches with so many programs to attract new people that we’ve forgotten their first vocation is to be temples where we allow space for God’s glory.

Trump is pretty well the opposite of a sanctimonious person, but he could really use some education in the concept of solidarity. Jesus is God’s solidarity with humanity over against the sanctimony of God’s self-appointed religious handlers from his day and our day. I’m not sure Trump could climb up into a sycamore tree, but he’s basically like a modern-day Zacchaeus. If Jesus saw him, he would do what so many A-list Hollywood celebrities have refused to do. He would go eat meatloaf with ketchup and chocolate cake with him at Mar-A-Lago. And maybe Jesus’ solidarity would make Trump do a sudden 180 on all of his bad policies just like he did on his China policies after Xi Jinping ate chocolate cake with him last week.

One of the fundamental catalysts of Trump’s identity is the sense that he’s an outsider slum lord from Queens who never could make it with the rich liberal snobs of Manhattan. Jesus came for the outsiders, whether they were filthy rich tax collectors or dirt poor prostitutes. If Trump were willing to do a fourth step (from the 12 steps) and deal with his resentment against liberal snobs, then maybe he would awaken to the existence of the billions of outsiders on the planet who have life a lot worse than he did. Maybe, he could work for the betterment of outsiders (including non-white people) rather than simply raging against the insiders he hates so much.

One of the most perplexing and toxic phenomena of modern human psychology is the way that herds of people are attracted to self-aggrandizing narcissists through whom we can “win” vicariously. It doesn’t seem like a coincidence to me that 81% of the people who flock to “winning” evangelical megachurches would go for the candidate whose campaign was simply about “winning.” But the form of leadership Jesus prescribes is not to project “winning” but to serve and empower others. Imagine if Donald Trump became a servant whose purpose was to empower people he was mentoring and make them look good instead of finding ways to take credit for other peoples’ work to make himself look good.

There’s no place that Donald Trump would rather be than on a stage in a stadium. Me too! I really wanted this book to be a bestseller so I could pack out stadiums. But God knew better than to give me what I wanted. The most painful and liberating transformation I am going through is to stop trying to build up my own stadium and accept my place as a simple pilgrim in God’s kingdom. Imagine a Donald Trump who lived for God’s kingdom rather than his own stadium. What if he spent the last years of his life converting his decadent real estate empire into the affordable housing so many of our cities so desperately need? That would be a kingdom move worth praying for.

If you’re intrigued, then check out my book How Jesus Saves the World From Us!

Also subscribe to our podcast Crackers and Grape Juice!

If you’d like to support our campus ministry NOLA Wesley, you can do so by becoming a patron or a one-time donor. 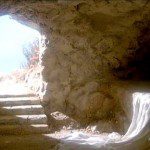 April 16, 2017
Can Easter be more than the church's self-congratulatory triumphalism?
Next Post 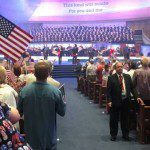