United Methodism Was Designed for Relational Discipleship Not Ideological Takeover

United Methodism Was Designed for Relational Discipleship Not Ideological Takeover May 2, 2017 Morgan Guyton

The United Methodist Judicial Council ruled this past weekend that Karen Oliveto was elected illegally as a bishop because she is a married lesbian. But her election and consecration could not be overthrown because she was an elder in good standing when she was elected. In fact, she served her first church before the Book of Discipline was modified to prohibit gay ordination in 1984. Now the Western Jurisdiction that elected her bishop is tasked with “punishing” her for their decision to elect her, which I’m pretty sure they won’t do. Because that’s the way United Methodist polity is set up. Only with a 2/3 vote can the Council of Bishops supersede the Western Jurisdiction’s process and remove her, and the conservatives don’t have 2/3 of the bishops. Though many will be angry, United Methodism wasn’t designed for ideological takeover; it was designed for relational discipleship.

For the past thirty-seven years of the Reagan age, a large segment of our society has been indoctrinated with the view that government is inherently a bloated, inefficient bureaucracy. It’s created a very hostile environment for connectional church polity, since many United Methodist conservatives seem to project the Republican political narrative onto our denomination. The liberal elites are wasting our resources with their politically correct, unaccountable institutions while thriving conservative local churches are being tyrannized into coughing up their hard-earned “tax dollars” for apportionments. Conservatives basically advocate congregationalist polity except when it comes to sexuality, in which case their views must be imposed on everyone else in the denomination or they will leave. Even an acknowledgment that we are not of one mind is not allowed. Reagan era conservativism is such a selective patchwork of libertarianism and authoritarianism.

But what United Methodist conservatives are discovering after four decades trying to crush progressives is akin to what Donald Trump has discovered in his first 100 days in office. Just because they always win doesn’t mean they have absolute power, because our system wasn’t designed for absolute power. To fight culture war through the Book of Discipline is analogous to the way Republicans have used the prospect of Supreme Court nominations to raise money and motivate their voters. Partisanizing the judiciary branch of our government is breaking our democracy the same way that weaponizing the Book of Discipline is breaking United Methodism.

It’s not because United Methodism is an awful, broken system to begin with. It’s because the people who are charged with enforcing church law are called to think like pastors rather than cops. They take seriously their baptismal vow to “resist evil, injustice, and oppression” as an actually binding covenant instead of treating it like pious babble easily swept aside by the other paragraphs that actually have weight. The Discipline is only without contradiction if you decide that some paragraphs actually don’t count. So our bishops use the pastoral discretion the Discipline affords them, which means they don’t automatically defrock clergy for being gay or marrying gays which is completely within their right according to the Discipline, and the conservatives call them “weak, failed leaders” as a result.

The processes outlined in our Discipline were not designed for culture war conquest. They were designed for people with real flesh and blood relationships to work and seek God’s will together. That’s why clergy are members of annual conferences rather than one massive global database. That’s why our ordination candidacy processes happen at the level of annual conferences rather than through a general agency that flies an impersonal pool of candidates into Nashville for a mechanized vetting process. When covenant is defined as a relationship with several paragraphs in a book that people who don’t really know each other argue about every four years, then the term has already been hopelessly bastardized. It’s not supposed to be about winning a political battle; it’s supposed to be about shepherding people in whom we have personally invested so we can grow together in Christ.

If I had never joined the United Methodist Clergy Facebook page and all I had to go by were the interactions within the order of elders in the Virginia Conference, I would say that United Methodist clergy are a very warm and nurturing community with wise and capable leadership. It would seem very strange to me to hear people say that the whole thing is falling apart. For example, even though I’m on loan far away in Louisiana, two years ago when I wrote a blog post about being depressed, my Virginia District Superintendent Jeff Mickel called me six hours later. He paid for me to have a clergy coach the rest of that year, which was probably the reason I survived my first year of campus ministry. I think Jeff is more conservative than I am. I’m not really sure. In Virginia, I know other pastors as friends and mentors who care about me rather than as friends or foes on an ideological battlefield.

What I don’t understand is why we can’t just support each other making disciples in each of our respective mission fields, comparing notes and cross-fertilizing as the Spirit leads us. Each of us is gifted and called differently. God has used our campus ministry to bring at least half a dozen ex-evangelical students back to Christ. The activist and LGBT communities know that they are safe in our space and that we will show up for them. We’ve actually had students join just because they saw the Reconciling Ministries rainbow logo in our front window. We started from scratch two years ago and have about thirty affiliated students today. Tulane also has evangelical campus ministers with whom I’m friends. Their mission niche looks different than mine, but we have definitely exchanged ideas and there are areas where we can work together well.

After two years of focus on building a welcoming community, our ministry has built enough trust with our core students to take things deeper. We just had an awesome visioning retreat this past Saturday with our fall student leadership team. We looked at two scriptures that God gave us.

John 3:8 describes the spiritual liberation we want people to experience in our midst: “The wind blows where it chooses, and you hear the sound of it, but you do not know where it comes from or where it goes. So it is with everyone who is born of the Spirit.”

2 Corinthians 3:17-18 describes the authentic, inspired community that we’re asking God to make us: “Now the Lord is the Spirit, and where the Spirit of the Lord is, there is freedom. And all of us, with unveiled faces, seeing the glory of the Lord as though reflected in a mirror, are being transformed into the same image from one degree of glory to another; for this comes from the Lord, the Spirit.”

John Wesley described Christian salvation as justification and sanctification. For biblically novice millennials, I translate those two terms as freedom and inspiration. It doesn’t reach students in my mission field to talk in terms of the Four Spiritual Laws of late 20th century evangelicalism. So I talk to them about escaping the confusion and anxiety of an idol-saturated world by joining the table where Jesus offers a feast. I tell them the eternal life Jesus offers isn’t just a cheesy Disney heaven you go to after you die, but the incredible belonging of communion with God right here and right now. I tell them about the hiden reality of the kingdom of God that they are invited to live in.

As I’m figuring out how to preach the gospel at Tulane University, I’m following the training I received from evangelicals in the missional movement like David Fitch, Alan Roxburgh, Jo Saxton, and Mandy Smith. If the missional folks are right, the gospel is never a one-size-fits-all commodity. It always has to be incarnated into its local context. Tulane is an extremely secular school filled with overachieving overdrinkers. They need to hear the story told in a particular way, and I think God is showing us how to do it.

We’re on the cusp of figuring out how to do Wesleyan Christian discipleship at Tulane, and it feels like we’re getting the plug pulled on what we’re doing right as we’re starting to get traction. While I don’t agree with conservative evangelicals about homosexuality, that doesn’t mean that I’m preaching a lukewarm, feel-good gospel. I’m still pretty evangelical when it comes to my sensibilities about the gospel. I want my students to experience the fullness of God’s kingdom, and I want to figure out what combination of teaching, modeling, listening, and accountability will help them get there. In other words, I want to make disciples. And I want them to be spiritually liberated and inspired by Jesus so they can have the fruit that Paul talks about in Galatians 5:22-23. Imagine if United Methodism were actually all about relational discipleship. It’s what people on both sides say that we want. So why don’t we stop fighting and let annual conferences discern where God is leading them in conversations that happen between people who know and love each other?

Please help NOLA Wesley liberate and inspire the students at Tulane and Loyola by becoming a patron or one-time donor. Fundraising has taken up a significant amount of our time this spring. The more support we raise from generous patrons who are willing to give on a regular schedule like $10 a month, the more we can focus on discipleship. 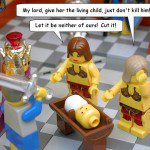 May 3, 2017 No, there aren't two United Methodisms
Recent Comments
0 | Leave a Comment
Browse Our Archives
get the latest from
Mercy Not Sacrifice
Sign up for our newsletter
POPULAR AT PATHEOS Progressive Christian
1