When It Became My Duty Not to Stand for the National Anthem September 23, 2017 Morgan Guyton 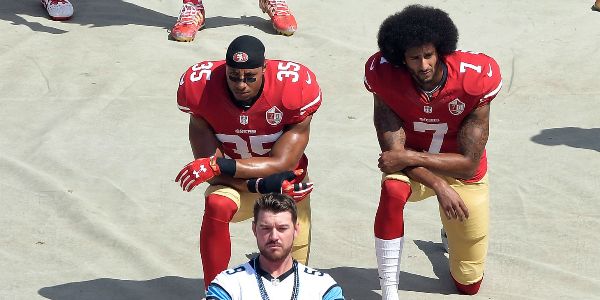 I’ve really tried to avoid writing about Donald Trump on this blog because I believe that obsessing over his every latest outrage is spiritually toxic. He normally doesn’t make me mad because I expect him to say everything that he does. But something about this latest rant against professional football players who kneel for the National Anthem is hitting me a different way. And responding seems more like prophetic duty than impulsive reactivity. As I’ve reflected and prayed throughout the day, I’m realizing that God is not going to let me stand for the National Anthem again until black people tell me that it’s okay to do so.

“Get that son of a bitch off the field!” Part of me has always realized that professional sports are a black minstrel show for rich white people. But never before has the president of the United States flaunted this reality so openly and viciously. Never before has the president of the United States showed complete contempt for the one freedom that is supposed to distinguish our nation from every other nation. This one freedom is the only reason that it makes sense at all to stand with your hand over your heart when the National Anthem is being played. There is not a greater blasphemy of everything America is supposed to be about than for our National Anthem to be used as a means of crushing freedom of speech.

The Second Commandment in the Bible says, “You shall not make for yourself an idol, whether in the form of anything that is in heaven above, or that is on the earth beneath, or that is in the water under the earth” (Exodus 20:4). Why is idolatry prohibited? It’s not inherent that using a physical object to represent God means you’re worshiping something other than God. The Greeks and Romans didn’t believe that they were literally worshiping statues, but rather the gods represented by the statues.

The reason for the Second Commandment reveals itself in a speech in Acts 19:25-28 made by an Ephesian silversmith Demetrius to other silversmiths whose chief trade was manufacturing silver statues of the goddess Artemis:

“Men, you know that we get our wealth from this business. 26 You also see and hear that not only in Ephesus but in almost the whole of Asia this Paul has persuaded and drawn away a considerable number of people by saying that gods made with hands are not gods. 27 And there is danger not only that this trade of ours may come into disrepute but also that the temple of the great goddess Artemis will be scorned, and she will be deprived of her majesty that brought all Asia and the world to worship her.”

Through this speech, Demetrius started a riot that almost resulted in the lynching of the apostle Paul and his fellow missionaries. The danger of idols is that they can be manipulated by people who want to make money. The Israelites had a unique recognition of this danger among ancient civilizations. A God who is not made into an idol is a God who cannot be manipulated and exploited by the priests who control the idols or the artisans who make them.

The American flag is performing the exact same function for NFL spectators that the Artemis statues performed for the people of Ephesus. The National Anthem is being used as a pious hymn that turns the spectacle of male gladiators beating each other up into a legitimate religious ceremony. The early fathers of the Christian church would have zero ambivalence about our duties as Christians to declare Jesus as Lord in the face of obvious idolatry. When they chose to nonviolently kneel rather than hailing Caesar’s statue, they were thrown to the lions. No early Christian would stand for our national anthem.

The gift that Trump has given to American Christians is to reveal what is at stake in our nationalist idolatry. The symbol that is supposed to represent our freedom is being used to crush the freedom of black people. This is exactly the kind of manipulative power game that idolatry creates, which is why the Bible condemns it.

I had not realized before that the Second Commandment forbade me from standing for the National Anthem, but now I cannot pull back from that realization with any integrity. To stand up and hail Caesar is not only to spit on the freedom of black NFL players, but to spit on the sacrifice Jesus made for me on his cross, because if he really is my Lord and savior, then I shouldn’t be singing hymns about how my salvation comes from the rockets’ red glare and the bombs bursting in air.

So I will not be standing for the National Anthem again until it becomes clear that the wickedness of our nationalist idolatry and its underlying white supremacy has been brought into complete repentance. As long as white people are using the American flag as an idol for the manipulative purposes that make an idol sinful, it remains a sin for me to condone this practice even if the flag is not inherently an idol for me. This is precisely what the apostle Paul argued to the Corinthians about the sin of affirming the idolatry of sacrificial meat. So I’ll close with his words.

What do I imply then? That food sacrificed to idols is anything, or that an idol is anything? 20 No, I imply that what pagans sacrifice, they sacrifice to demons and not to God. I do not want you to be partners with demons. 21 You cannot drink the cup of the Lord and the cup of demons. You cannot partake of the table of the Lord and the table of demons. 22 Or are we provoking the Lord to jealousy? Are we stronger than he? [1 Corinthians 10:18-22] 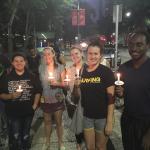 September 26, 2017 Our 8 coolest ministry moments so far this year
Recent Comments
0 | Leave a Comment
"What's the time limit for that, then?And how do you know this?"
Nixon is Lord Rachel Held Evans and the Democratization ..."
"Thanks so much for reading and sharing!"
Morgan Guyton The Clown (A Poem About God)
"This is rooted in such precious truth of our Lord and who we are in ..."
Anita Grace Brown The Clown (A Poem About God)
"Fantastic blog and devotional. Thanks for sharing."
mike looker Paraklesis: a beautiful word (2 Corinthians ..."
Browse Our Archives
get the latest from
Mercy Not Sacrifice
Sign up for our newsletter
POPULAR AT PATHEOS Progressive Christian
1