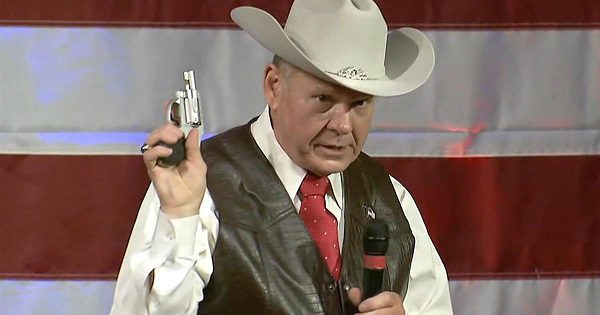 It really is starting to feel like something supernatural and apocalyptic is at foot in our country during the Trump Era. So many secret sexual sins are being publicly exposed. It’s like God is testing his people, especially the sexual puritans, to see how far they have deviated from any semblance of integrity in their political proclivities so they can be crushed utterly by the wrathful exposure of God’s truth and then resurrected into an entirely new reality.

My people, the evangelical Christians, have not fared too well under God’s testing so far. More evangelicals supported Donald Trump than Ronald Reagan, even knowing that he openly bragged about sexual assaulting women. And now they face yet another test as the celebrity conservative evangelical Alabama ex-justice and senate candidate Roy Moore is confronted by allegations that he molested one fourteen year old girl and pursued three other teenage girls in the early 1980’s.

None of these women are connected to each other. They did not seek out the press with their stories, but they were sought out by an investigative journalist who had heard murmurs in Alabama Republican circles of Moore’s fondness for teenage girls. With the story hitting the news now, Moore’s name cannot be removed from the ballot for Alabama’s December special election, whose winner will serve through 2020. If Moore loses, the Senate could be in play for Democrats given a strong backlash against Trump in 2018, which would put a check on Trump’s ability to appoint ultra-conservative Supreme Court justices.

So Alabama evangelicals have to weigh whether it’s worth supporting a likely alleged pedophile for the Senate in order to pursue another Supreme Court nomination and hold onto Republican power. I suspect that many Alabama evangelicals will say Roy Moore is innocent until proven guilty and that these allegations are a vast left-wing conspiracy by the press (basically the mirror image of Hillary Clinton’s defense of her husband against his sexual assault and harassment allegations by multiple women).

Alabama State Auditor Jim Ziegler told the Washington Examiner. “There’s nothing to see here. The allegations are that a man in his early 30s dated teenage girls. Even the Washington Post report says that he never had sexual intercourse with any of the girls and never attempted sexual intercourse.” That’s truly one of the most remarkable quotes I’ve read in a year of remarkable quotes. At what point will the cognitive dissonance and mental gymnastics finally collapse so that these culture warriors can experience the incomprehensible demoralization that leads to the sweet joy of complete repentance?

It’s no secret that I tend to be more progressive about political issues, but mostly my political views are secondary to my concern about the church’s witness. I would have been a reliable moderate if the culture wars hadn’t existed. The culture wars pushed me to the left because I hated the way that the religious right made Jesus look to my non-Christian friends. The culture wars have ruined evangelism for the American church with most of our country’s population for generations to come. The church will continue to draw strongly from the atrophying subset of the population who are wired for traditionalism whether through genetics or traumatizing life circumstances, but the dreamers and artists and seekers who make the body of Christ a rich and beautiful space are not going to settle for unthoughtful, reactionary traditionalism. They’ve moved over to the ranks of the Nones, the Dones, and the Exiles.

What I want desperately is for the church to stop embracing the identity of a refuge for traditionalists who are frightened by the pace of change in our society. Its growth and its vitality over the past three decades have been firmly rooted in this identity as a refuge for people seeking black and white answers in a world of too much grey. Yes, it’s true that much of the church decline in the past decades have been progressives leaving the church, but what if that’s as much a result of culture war toxicity as it is a result of uncompelling liberal theology (which I’m not a fan of)? I don’t understand why so many evangelicals seem to value the evangelism of half of our country so little that it has zero influence on the hills they choose to die on.

The good news is that Jesus can save us from our shame and fear so that those who live under his mercy can act boldly to transform the world into a place where everyone belongs. The truth of the Bible could actually be very compelling to progressive young adults today were it not smothered by the wet blanket of heteropatriarchal ideology. It’s become impossible to imagine that Christianity ever could have been a source of movements like abolitionism, women’s suffrage, labor rights, or civil rights. But it was! Even fifty years ago. It’s just that now the loudest and most powerful voices in Christianity today are defined almost entirely by their opposition to feminism and queer identity.

So whatever happens with the senatorial special election in Alabama this December, I hope that men like Roy Moore and Donald Trump will serve God the same way that the Egyptian Pharaoh Rameses II did: as a means of exorcising tremendously sinful powers and strongholds. I was given a prophecy in 2012 that God would exorcise the American church of its legion of demons by casting them into a herd of pigs who are racing furiously into the lake of fire. This was all before a President Donald Trump was at all imaginable.

Well the pigs are racing today. Who will stampede into the lake with them? And who will wake up in a graveyard like the Gerasene demoniac with new wisdom and sanity to rebuild the church that we’ve all but ruined? 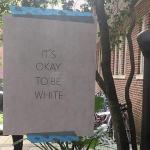 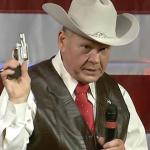 November 14, 2017 Roy Moore, Jerry Falwell, Jr, and the Evangelical Authority Crisis
Recent Comments
0 | Leave a Comment
"Perhaps the next pandemic cyclic will allow you to rethink your observations based on some ..."
Bob Shiloh Intuition and the Garden of Eden
"Good read, here is another interesting interpretation of the tree of knowledge and the fig ..."
Julie Why Does The Knowledge of Good ..."
"I believe the context has nothing to do with God condemning sin within or upon ..."
Joseph Kuzara How does God “condemn sin in ..."
"It's not about pro-/anti- homosexuality. It is neither your place nor mine to judge who ..."
Marc Wagner Can “Social Justice” Christianity Be Anti-Gay?
Browse Our Archives
Related posts from Mercy Not Sacrifice