Today is Holy Saturday, the day Jesus spent in the grave. It’s a day on which we are invited to sit with the unresolved brokenness of our world. Yes, we will say Jesus is risen tomorrow, but today is a day for not looking away from the suffering of the people whose company Jesus consistently chose and whose needs he consistently prioritized: the pueblo crucificado.

Pueblo crucificado is a term I encountered in liberation theologian Jon Sobrino’s book El Principio Misericordia. It means the people who are being crucified, those to whom Jesus’ cross declares, “I see what they have done to you and I am being crucified with you.” The cross is at least as much about Jesus’ solidarity with his pueblo crucificado as it is about his atonement for those who do the crucifying. The reconciliation and atonement Jesus provides is for victims and perpretrators alike. Sadly, in many Christian accounts of sin, the victims are erased from the story and sin is treated as a victim-less crime against God’s rules. When victimhood is erased, we end up with an incomplete understanding of the sin that needs to be destroyed.

In Sobrino’s work, he brings to light what I see as a critical aspect of our salvation that gets brushed aside in the ahistorical, abstract way that Jesus’ cross is often theologized. That is that Jesus not only pays for our sin on the cross, but critically he exposes our sin so that we can be liberated from it. Too many Christians in a misguided affirmation of the sovereignty of God’s plan erase the fact that Jesus’ crucifixion was itself a sin. Jesus doesn’t say, “Father, thank you for fulfilling your plan through the religious authorities who condemned me and the Roman soldiers who are killing me.” He says, “Father, forgive them for they know not what they do.” We must not dismiss this earnest petition from Jesus as though it is merely pious play-acting; it has no less real theological meaning than Paul’s metaphorical improvisations about the cross years later.

Jesus’ brutal death reveals the sin of not just the religious authorities who condemned him, the crowds they manipulated into demanding his crucifixion, and the Roman soldiers who fulfilled the deed, but rather the entire system and order of worldly sin that made Jesus’ death inevitable.

When Peter preached to the crowd in the Jerusalem temple on Pentecost, he says in Acts 2:36, “Let the entire house of Israel know with certainty that God has made him both lord and messiah, this Jesus whom you crucified.” These are the words that caused the first 3000 converts to Christianity to be “cut to the heart” and convicted of their need to be saved from their sin so that they were baptized in Jesus’ name. It was not their fear of an afterlife punishment, but their revulsion at the evidence of the wickedness they had participated in.

Part of how God saves us from our sin is by exposing us to the visceral horror of its consequences. When sin is understood solely in the abstract as “breaking the rules” and salvation is only avoiding eternal punishment, I fear that this results in an incomplete repentance, which seems to be corroborated in a lack of spiritual fruit.

So here is where Sobrino’s concept of the pueblo crucificado comes into play in a claim which many Christians will find controversial. It’s hard to be convicted by an event that took place 2000 years ago and could easily be blamed on the people in that time and place. Sobrino claims that the pueblo crucificado continues the salvific work of Jesus by continuing to convict those whose eyes are opened to the results of our sin and our consequent need to forsake the sinful order of the world for the kingdom of God. It is not that those who continue to be crucified are equally innocent or divine as Jesus, but rather Jesus’ cross redefines their otherwise meaningless suffering as the exposure of our world’s sin.

Jesus is crucified every time the world dehumanizes any one of God’s precious children whether it’s because they languish in a disease-infested shantytown in a country paralyzed by unjust foreign debt whose natural resources are being pillaged by multinational corporations or because their parents are snatched away from them while they’re at school by immigration agents or because their cell phone becomes a “gun” in the eyes of the cops who extrajudicially assassinate them. Jesus’ disgrace and dehumanization on the cross grants dignity to all the people who are invisible to those with privilege and power. Their pueblo crucificado is only going to grow larger every year as the global economy increasingly dehumanizes the vast majority of humanity and defines their gifts and vocations as unmarketable and irrelevant.

So I don’t think it’s incorrect to say that Jesus was crucified in Stephon Clark, Philando Castile, Michael Brown, and anyone else who has been dehumanized in their suffering and death. Yes, they are all sinners like all of us are. But we can choose to receive their suffering and death as a source of our conviction and repentance for the way our sin helps to create the world order that caused them to die. Of course, it’s important to acknowledge how easily this can turn into a self-justifying performance. One of my favorite lyrics of all time comes from VNV Nation’s song Kingdom: “Do you think that you’ll be saved by burning flags to cleanse yourself of shame?”

We do not save ourselves by burning flags or hashtag-tattooing our brand with #BlackLivesMatter. It is rather the case that Jesus can use the exposed suffering of the pueblo crucificado to drive us further out of the comfortable delusions of the sinful world so that we can journey more deeply into the kingdom of God. God can do a lot more good with an “unwoke” but humble, open-hearted, and spiritually thirsty disciple of Christ than a self-righteous woketivist who only talks about other peoples’ sin.

In my own life, I can testify that I wasn’t saved by a hellfire and brimstone sermon. Nor was I was saved by an intellectual realization of the logic of the gospel. Nor was I saved by all my self-righteous tirades against ignorant rich white people. I was saved in August, 1998 when a barefoot little girl in the Zocalo of San Cristobal de las Casas in the state of Chiapas, Mexico asked me to buy her unraveling Zapatista dolls for a peso apiece and I couldn’t look away from her.

I was saved because I couldn’t do anything to help her but God refused to allow me to live in the world without her. I wrote in my journal that night, “I can never be a tourist again.” That was how God ripped out my heart and planted in me the need to give my life to fighting for his kingdom. He used that little girl from Chiapas to invite me into his pueblo crucificado. I hope one day in a different world beyond this one, he will give me the opportunity to thank her.

Support our campus ministry NOLA Wesley as a monthly patron or a one-time donor! 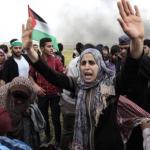 April 1, 2018 Easter Is For People Who Aren’t Winning
Recent Comments
0 | Leave a Comment
"Following the Bible's rules for "atonement".1) I steal your uninsured car and after a week ..."
C Nault Atonement: a basic explanation
""Years ago I recognized my kinship with all living beings, and I made up my ..."
ChristianPinko “All People Are Holy”: The Theology ..."
"That's beautiful."
Timothy Swanson My Light Blue Pink Messiah (a ..."
"As long as you believe in some uber demon you will always be fearful of ..."
JD Satan As The Virus of Enmity
Browse Our Archives
get the latest from
Mercy Not Sacrifice
Sign up for our newsletter
POPULAR AT PATHEOS Progressive Christian
1

Don't give yourself away
slacktivist
Related posts from Mercy Not Sacrifice