Is Hell the Reason to Love Jesus? 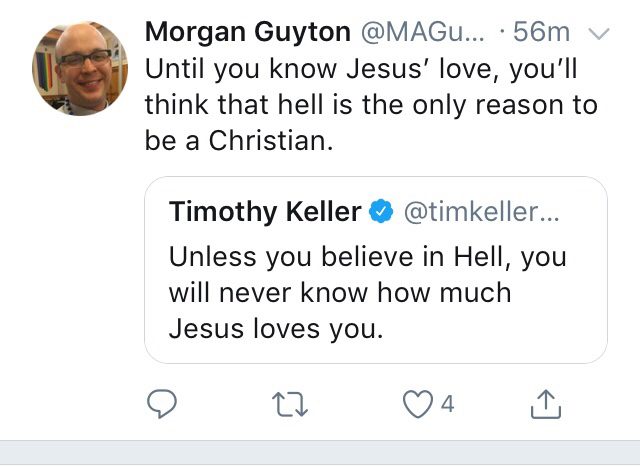 Tim Keller wrote two books Prodigal God and Generous Justice that really shaped me and which I quoted extensively in my own book. Like me, he takes risks on Twitter to try to provoke people. Unlike me, he doesn’t get mostly ignored since he has a huge platform. His recent tweet about hell justified a clever response and since nobody retweeted me as usual, I figured I would make a blog post, so at least some people would see my clever response to Tim Keller that nobody wanted to viralize since I’m not in the post-evangelical jet set.

First, let me say that I do believe in hell. I also believe that I don’t need to die to experience it. I’ve been there already. Ask any recovering alcoholic and they’ll tell you the same thing. To me, heaven and hell have simple definitions that I actually don’t think any conservative would quibble over. Heaven is communion with God; hell is alienation from God. There are many sinful ways humans can alienate themselves from God; salvation describes how Jesus delivers us from that alienation.

So maybe all Tim Keller is saying is that people who have been through hell and had Jesus deliver them from it know how much Jesus loves them. If that’s what he’s saying, then why did he say “believe in” as though it’s accepting the cognitive proposition of hell that is the prerequisite to experiencing Jesus’ love? I know many people who don’t believe in the hell that Tim Keller seems to believe in who have a very rich and beautiful relationship with Jesus. Based on other things Keller has written, I have a feeling he has a very specific evangelical conception of hell in mind with his tweet.

The hell that I learned about growing up is the same hell that every other evangelical kid learns about. Hell is where God eternally punishes people for sinning which they don’t have the ability not to do because of some guy named Adam and the only way to get out of it is to accept Jesus into your heart as your personal lord and savior. And if you’re Calvinist, you not only have to accept Jesus as your savior but you also have to believe that God remote-controlled you into doing it or else you’re not actually saved.

So God’s love is the fact that he was willing to kick his son’s ass on the cross instead of torturing me forever which is supposed to make me want to close my eyes emphatically and wave my hands around earnestly while singing praise songs like I’m some kind of North Korean state bureaucrat gushing about the wisdom of his Dear Leader.

Evangelical hell was a major obstacle to my discovery of God’s love. It made God seem like a Dear Leader whom you’re supposed to hypnotize yourself into believing warm and fuzzy things about in order to keep him from torturing you. I always had a suspicion that God really wasn’t the hard-ass that the macho evangelicals needed for him to be so they could prove how hard-core they were. And the real God gave me enough of his love that despite the confusion of evangelical hell doctrine, I cried out to him when I really found myself in hell.

Hell came to me first in the form of incomprehensible clinical depression. Before depression, when I got sad, I could always go to sleep and wake up the next morning with a clean slate in terms of my mood. The thing that made depression so debilitating was the way it stayed with me no matter where I went or what I did. I could be relaxing at the beach. I could be making out with a beautiful girl.

Wherever I went and whatever I did, I carried with me a suffocating weight in my chest that felt like a lead medallion. I remember reading John Milton’s “Paradise Lost” in an English class at the time where Satan says “Whichever way I fly is hell. I myself am hell,” and I thought yes, that is my life.

I went to a party my senior year in college and everyone around me was laughing and having a great time while I was miserable. The happier they were, the more miserable they made me. I remember thinking at the time this is what hell must be like. To be in heaven surrounded by people enjoying God’s love when I don’t feel what they’re feeling would be wrath and torture to me. I had read C.S. Lewis’s Great Divorce around the same time which explores a similar concept.

The way that Jesus delivered me from my first experience of hell was when he told me that my brokenness was my chosenness. Two years after college, I was in a Bible study with a group of sixty year old lesbians in Toledo, Ohio, reading Henri Nouwen’s Life of the Beloved where Nouwen describes Christian discipleship in terms of what Christ does to the bread at the last supper. We are taken, blessed, broken, and given, which are the four chapters of Nouwen’s book. Henri Nouwen also suffered from severe depression and it was the core of his vocation as a pastor and a writer. Reading that book was the start of Jesus’ process of delivering me and drawing me into a much deeper intimacy with him than if I had never been through the hell of clinical depression.

My second experience of hell happened much more recently. I was trying so hard to get into the post-evangelical jet set. I really wanted my book to be a bestseller. For seven years, my goal was to save the world from Christians through my book. Through the toxicity I acquired in the promotional buildup to my book’s release in April 2016, God showed me that the world needed to be saved from me and especially my self-medication with alcohol.

Hell is when you call your wife a bitch because she sets healthy boundaries and expects you to do what you’ve agreed to do. Hell is when you scream at your son for clogging the toilet because it inconveniences you. Hell is when you ignore your family and hide in your office to blog because nothing else is working. Hell is wanting to be a messiah and boiling with rage that no one wants to retweet your shit the way they do for Rachel Held Evans.

The most poignant moment in Jesus’s process of delivering me from that hell was in a weird, eclectic “Christian shaman” ceremony put on by my friend Pastor Nar at the Wild Goose Festival. There’s a passage in Revelation that talks about receiving a white stone on which you’ll be given a new name. So Nar gave us all white stones. And what the Spirit told me to write on my stone was “I’m not a hero; I’m a healer.” And though it didn’t all happen at once, I was set free from the need to be one of the post-evangelical messiahs. And I discovered Jesus’ love again.

I’ve had so many other moments of being delivered by Jesus from my alienation from God. My life as a pastor has been like Peter trying to walk on water and constantly falling and crying out to be saved. Hell is an almost daily occurrence in my journey, but so is heaven. I would say the closer I get to Jesus, the more acutely I experience any lack in our relationship, so levels of lack that wouldn’t have been hell before are hell for me now.

But it’s also the case that I’ve tasted so much heaven. When Paul says, “I know a man in Christ who fourteen years ago was caught up to the third heaven,” I think I’ve tasted something like that. Maybe not all the way to the third heaven. But I’ve had moments of incredible bliss and oneness with God that are indescribable. I’ve tried to write about them here.

I wish that evangelicals like Tim Keller would talk about the heavens and the hells that they experience in their daily lives rather than investing so heavily in getting people to “believe in” a reactive, punitive afterlife. The reason to be a Christian is not because God will punish you forever otherwise. The reason to be a Christian is because life with Jesus is amazing. All the things that I thought I wanted were filthy rags compared to a moment of communion with Christ. To think about what it will be like for every moment to be that way one day is inconceivable.

I haven’t figured out how to say these things in a way that will cause the millennials I evangelize to give a shit. But I’m still convinced that I’m supposed to entice with mystery rather than terrify with a clunky, mechanistic account of punishment that has more to do with the worldly accommodation of a “law and order” culture than fidelity to the biblical text. Hell and heaven are both very real to me. I believe that some and perhaps many people are at risk of spending eternity alienated from God. I believe that Jesus rescues us from that fate. But there’s a better way to talk about all that than what Tim Keller is tweeting. For one thing, his books are a lot better than his tweets.

Please support our ministry NOLA Wesley as a one-time donor or monthly patron! 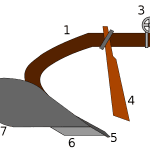 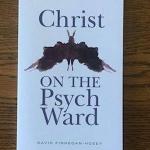 May 2, 2018 Is Jesus on the Psych Ward?
Recent Comments
0 | Leave a Comment
"Hi Morgan: Much of your article I do like. Twelve Step has helped me embrace ..."
Dave Sable Seven things AA taught me about ..."
"Don't you know that we are dead to sin? Don't you know that we were ..."
WhereAngelsTread Should we preach to uplift or ..."
"Freud would have a field day with a lot of these evangelicals"
Rainbow Warrior If Shakira’s Tongue Causes Your Eye ..."
"I do wonder if it is more of a "first world-ness" or "american-ness" versus Asian ..."
US_Constitution RIP 1-31-2020 Coronavirus, Saturday Night Live, And White ..."
Browse Our Archives
Follow Us!