Jews? Or Judeans? Can Fixing Nomenclature Save Lives?

Jews should be read Judeans in our Bibles and lectionary, and this correction could help us eventually bury the criminal absurdity that Jewish people killed Christ.

The lights of Christmas and Hanukkah are dimmed by hatred and violence in Trumpland. Once more, another antisemitic attack in this country turns bloody. Sadly, hate crimes committed against Jews in the U.S. have been rising for years. We American Christians would sure like to believe that we are safely removed from the possibility of genocidal acts, that we have evolved past pogroms and anything remotely like an Adolf Hitler. But no matter how pleasant our dream-world is, awake is better. Intellectual dishonesty and denial debilitate transformation and the shootings and stabbings keep coming.

Fruit from an Unofficial Christian Tradition

Our Church, and especially its hierarchy, have made intellectual dishonesty and denial into an art form. This is especially true when it comes to the long history of hateful violence committed against Jews.

John Paul II the Late, the first pope (in the modern sense) ever to visit a synagogue (as known after 500 CE), was repeatedly praised for his commitment to Catholic-Jewish dialogue. He even asked for forgiveness for actions and displays of antisemitism committed by Christians against Jews throughout history. But look closer at his statements: never is the Catholic Magisterium guilty according to JPII, despite its direct role in these horrors which is easy to demonstrate. He expunges from memory bishops and priests who supported the Nazis (even with the papal limousine that once bore the swastika!).

We Christians, one and all, need to wake up to this sinister hatred which we have mothered and nursed down through the centuries. Despite the many sharp differences between us, one unspoken doctrine has been treasured on both sides of the Tiber and Bosporus—lethal hatred of Jews and damning them as “Christ killers.” Just because we don’t defend or advocate the Holocaust in a formal teaching, doesn’t mean our hands remain un-bloodied of what happened.

The same thing can be said of all the December attacks against Jews worldwide, including the stabbing incident at a rabbi’s home in Monsey, New York. Christianity down through the ages has played a part in making these horrors happen.

Author Garry Wills makes a fascinating and an insightful comment in this regard, in his “Papal Sin, Structures of Deceit,” p. 17—

“Let us apply that kind of thinking to a current situation. The teaching church says that abortion and contraception are mortal sins and crimes against human persons. Is the church guilty of those crimes (assuming, for the sake of argument, that they are such)? No, says the Vatican, because the Pope has condemned them. On the other hand, polls confirm that a majority of Catholics (88 percent in 1993) accept contraceptive methods in theory, and those in a position to act on that acceptance do so. Catholics are also no different from the rest of the population in the number of abortions they undergo. The church, then, is ‘committing’ abortion and contraception, though its leaders say that they must not. In the same way, Catholics were active in the Nazi state, even though their leaders (some of them, some of the time) told them not to be.”

A Long Way to Go

Have there been improvements in these regards? Yes, but not enough. And even though there have been tremendous improvements compared to previous centuries, those improvements came at a hefty price on the Jewish side. I am talking about the cost of millions of lives for the Christian wake-up call. But admittedly we actually have inter-religious dialogue now between Jews and Christians. This RECENT marvel, born only in the 20th century, is a great first step. It would be injustice to not credit JPII with making breakthroughs there, despite his shortcomings. A child of the 70s, I have yet to hear Jews called “perfidious” at liturgy on Good Friday.

In an earlier post exposing our cherished “allegory-gone-wild” Patristic style of reading the Gospels, I showed the alarming tendency among the Fathers both East and West to turn Jesus’ parables into anti-Semitic rants. Throughout Christian times, preachers everywhere have filled the centuries with charging the Jews with deicide. Seminaries taught this hate as virtue. All this fueled the pogroms and other crimes. And now we have popular Catholic fundamentalistic authors, self-proclaimed “defenders of the Church,” who champion Patristic allegorizing.

My fifty-six year old friend, a college professor of history, tells me as a boy of Irish priests explaining that during Lent it was virtuous to “sock a Jew in the face” for denying and killing the Lord. This man loves the Catholic Church and has a photographic memory. There are many stories like this from many people. We need to face them and stop whitewashing the Magisterial record.

But what if I told you, that in addition to the soul-searching we Catholics and other Christians must do regarding our historical treatment of our Abrahamic kin, there was something we could do right now to help this? It’s simple—whenever reading the Scriptures in English, scratch out every reference to JEW, JEWS, or JEWISH, and write there JUDEAN or JUDEANS. All lectors—every time you are prompted to read JEW, JEWS, or JEWISH, read aloud instead JUDEAN or JUDEANS.

Any and all mention of “Jew” and “Jews” should be removed from our English translations of Bible, missals, and lectionary. They are always wrong translations. There is nothing Jewish before 500 CE.  Therefore, there are no Jews in the Bible (by the way, there are no Christians there, either—nothing Christian until 325 CE). Yehudim and Ioudaioi properly translate to JUDEAN, not JEWS. Our Jewish brothers and sisters did not betray Christ—they could not have done that. Their branch on the Abrahamic tree is parallel to ours, a sister shoot, not the root.

“As Jacob Neusner and a growing number of scholars have been emphasizing for some time now, the concept ‘Jew’ as understood today derives not from the ﬁrst century but from the fourth and following centuries CE. It denotes persons shaped by and oriented to not only Torah and Tanakh but Mishnah, Midrashim and Talmudim.

“In similar fashion the name ‘Christian’ as used and understood today designates persons marked more by doctrines and events of the fourth and later centuries (trinity of the godhead, double natures of Christ, consolidating and hierarchically structured catholic church) than by those of the ﬁrst.

“Thirty years ago Rosemary Radford Ruether had already pointed out that it was in the fourth century that Judaism and Christianity assumed the features by which they are known today. Indeed, Jewish scholar Daniel Boyarin (‘Dying for God: Martyrdom and the Making of Christianity and Judaism’ p. 6) cites Ruether with approval and aptly describes both collectivities as ‘twins in the womb’ until the fourth century.”

“To call Jesus a ‘Jew’ or a ‘Christian’, as these words are understood in the vernacular today, not only confuses the matter historically, but has led to disastrous social and inter-religious consequences.

“Despite the growing number of scholars in agreement with these positions (see below), use of ‘Jew’ and ‘Judaism’ in reference to Israel and Israelites in the Second Temple period and use of ‘Christian’ and ‘Christianity’ in reference to Jesus and his earliest followers continue unabated in both professional and lay circles.”

In the lexicon entry on Ἰουδαῖος in “A Greek-English Lexicon on the New Testament and Other Early Christian Literature” (p. 478), scholar Frederick Danker laments that:

“Incalculable harm has been caused by simply glossing Ἰουδαῖος with ‘Jew’, for many readers or auditors of the Bible translations do not practice the historical judgment necessary to distinguish between circumstances and events of an ancient time and contemporary ethnic-religious-social realities, with the result that anti-Judaism in the modern sense of the term is needlessly fostered through biblical texts.”

To understand these arguments, and to grasp why calling Jews Christ killers is not only grossly evil but ridiculous besides, please read John Elliott’s tour-de-force on the subject, here:

Cleaning up our nomenclature is the next step to healing from the ancient Christian disease of hating Jews. Saying “Judean” rather than “Jew” isn’t just semantics. While making this important change will not magically sweep away all antisemitism in the Church and greater world, it is nevertheless a great step in the direction of saving lives.

Tragically, there have been but two tragic responses from Christians toward Jews down through the ages. The first and overwhelmingly more often chosen response is cursing and hating the Jews as murderers of Christ. The second, more recent option, is racist Zionism, which sees the Israeli government incapable of doing any wrong. Both dehumanize, one by treating Jews as if they were a disease, and the other, by treating Jews as if they were angels.

God have mercy on our world and on all the families affected by the recent attack in New York. 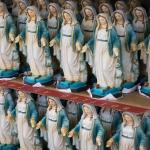 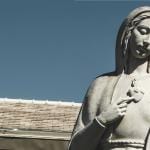 January 1, 2020 Did Mary Know?—Considering the Mother of God
Recent Comments
7 Comments | Leave a Comment
"I was only able to admire JPII when he was dying and didn't act ashamed ..."
Karen Silver Who Is Worthy of the Eucharist?
"Good and thanks. I get outraged when some Bishop decides that President Biden should be ..."
Karen Silver Who Is Worthy of the Eucharist?
"Who would consider the son of a deity that damned the entirety of the species ..."
Kyllein MacKellerann " The Woes of “Matthew”—Jesus Wasn’t Nice!
"Let me share my theory. There was a widowed Jewish man who went around sharing ..."
Karen Silver The Woes of “Matthew”—Jesus Wasn’t Nice!
Browse Our Archives
get the latest updates from
Messy Inspirations
and the Patheos
Catholic
Channel
POPULAR AT PATHEOS Catholic
1