Birth from God is what the Johannine Jesus offers, something hopelessly misunderstood by Nicodemus.

Birth should be on our minds reading the Gospel of “John” this week. Yesterday we began to explore John 3:1-21, the Gospel passage from these weekdays’ readings. Nicodemus, an archon of the Judaeans, comes to Jesus in darkness and likewise leaves him in darkness. He never understands what Jesus is telling him. These two are like ships passing each other in the dead of night, going in completely different directions.

Nicodemus’ exchange with Jesus gets into the sticky subject of birth. Birth and the honor status it provides would be on the minds of any Mediterranean listening to this preposterous story of a Judaean elite trying to learn from a Galilean peasant. Honor is everything in the Mediterranean world of the Gospels, and the primary way one acquired honor is through birth.

John 3:3
Jesus answered and said to him, “Amen, amen, I say to you, no one can see the kingdom of God without being born anōthen.”

Here the topic is birth and the Greek anōthen is an important pun employed by “John”. Since honor is everything in the world of Jesus, how you got it and how people determined it likewise were important. Biblical persons derived their honor rating from their birth status. Your birth determined your honor rating—your ascribed honor. In day-to-day challenge and riposte competition, a male’s honor rating might be affected in small gains and losses, but unless something extraordinary happened, their honor status basically remained the same throughout life.

So unless something transpired way the beyond the ordinary, elites like Nicodemus remained elites, and peasants like Jesus remained peasants, until death. There was no “upward mobility” or social advancement in the biblical world. Your birth basically set you up for life, honor-wise.

Given that, why would an elite like Nicodemus desire a second birth? The very idea would be horrific to imagine. One meaning of the multivalent pun anōthen means “again,” as in a second time. This is the meaning that Nicodemus in the darkness gets from what Jesus tells him in John 3:3. Such a rebirth is unthinkable to any first century Mediterranean elite. Through this new birth, he would fundamentally lose his ascribed elite honor status.

This second birth would wipe clean the old elite status and provide a new one. Seen this way, birth anōthen, especially into a fictive kin-group of social misfits centered around a crucified Galilean peasant, would alter one’s life in a catastrophic way.

From the beginning of this strange conversation, the Johannine Jesus gives his word of honor, placing himself under a curse to assure Nicodemus that what he tells him is true—“Amen, amen, I say to you…” (John 3:3, 5, 11). Then in verse 3 comes the ambiguous Greek term anōthen. This word can mean both “again” and “from above.” How should a translator render anōthen in John 3:3 into English?

Clearly, Nicodemus understands only one meaning of anōthen: AGAIN. That is made evident by what he says to Jesus in verse 4—“How can a person once grown old be born again? Surely he cannot reenter his mother’s womb and be born again, can he?” Indeed, how many Christians ask strangers, “Have you been born again?”

The Birth Jesus was Talking About

Birth anōthen means to be born of sky vault, from where Jesus, Son of God and the Sky Vault Man, comes. Anyone born in this sense has become a child of God. The Johannine Jesus group, an anti-society with its own anti-language, so believed in this that “Children of God” (Tekna Theou, John 1:12-13) was the name they gave their own community.

In the opening hymn praising the Cosmic status of messiah Jesus (John 1:1-18), we read, “to all who received him, who believed in his name, he gave power to become children of God” (1:12). Whereas the Matthean Jesus group held to the tradition where God makes Israelites who prevent blood feuds his children (Matthew 5:9), the Johannine Jesus group disagreed. For this unique community, it was by birth into their anti-society that you become one of the “children of God” automatically. Born “from above,” you are radically re-created into an honor-status incomparable to even the highest earthly royal magnificence.

Lost About the Birth

Yep. Among first century Jesus groups, the Johannine “Tekna Theou” was weird. With the exception of the firstborn Jesus, everyone inside was equalized! There were no differences in honor status among these “Children of God.”

And an outsider like Nicodemus? In the darkness of night, he is lost and blind. He thinks Jesus is talking about being born again. He doesn’t get birth from above. It’s because he can’t! Nevertheless he does realize that Jesus is proposing something radical.

In John 3:5, the Johannine Jesus next attempts to clarify what he said in verse 3. Once more he swears an oath, thereby once more placing himself under the curse. Jesus tells Nicodemus that he must be born of water and pneuma to enter the kingdom of God.

Let’s break all that down because so much honest ignorance and sincere stupidity haunts readings of these passages. Fundamentalists, including popular Catholic “apologists,” think they love John chapter three. They visit it like a marketplace giving away free food, plucking lines out bleeding, ripped out of context, to use as weaponized quotes that prove their “superior theological positions.” But to honestly and respectfully read these passages, we need to see it all within the whole of John 3:1-21 and really the entirety of the Fourth Gospel.

Different Birth Into a Different Kind of Jesus Group

Whenever Paul or the Synoptics speak of the “kingdom of God” they mean a forthcoming Israelite theocracy. But not “John.” The Tekna Theou, otherwise known as the Johannine Jesus group, were strange among the Jesus groups! They didn’t give a hoot in hell for theocracy! As far as they were concerned, that idea had lost its luster at some point in the evolution of their anti-society. Therefore, in this crucial matter, Johannine messianists were in radical disagreement with Paul and the Synoptics.

Unlike other first century Jesus groups and their documents, nowhere in “John” does “kingdom of God” mean theocracy. In the Fourth Gospel everyone stays a disciple of Jesus for life, and nobody gets appointed as an apostle to go proclaim to outsiders any forthcoming reign of God. Apostle Mary Magdalene is sent to Johannine insiders who doubt (John 20:17-18). Same with the disciples in the locked room (John 20:19-23). Consequently, Johannine concerns were profoundly for their own ingroup—“love ONE ANOTHER” (John 13:34-35). These people weren’t universalists!

Sorry CRU (formerly Campus Crusade for Christ). You may think you love the Gospel called “John” and take inspiration from what you think you are reading in it, but you aren’t really getting it. Yes, thank God, the Spirit kept blowing and expanding understanding beyond that of our ancient ancestors in the faith, but let’s not look anachronistically for biblical marching orders.

What “Kingdom of God” Means in “John”

In John 3:13-15, the Johannine Jesus explains the uniquely Johannine understanding of “kingdom of God” to which “birth from above” grants access. As the Gospel called “John” was written, the anti-society to which the document belonged was already experiencing new, eternal life through the resurrected Sky Vault Man Jesus. How? By his continual descents from the sky vault among his friends (see John 20—21).

Via altered states of consciousness (ASC), the Johannine Jesus group continued experiencing the presence of Jesus regularly and routinely more than any other community of believers. As was promised in John 1:51, Johannine believers could ascend and descend on the ladder-like Sky Vault Man Jesus in their gatherings. (We are now looking at the roots of our evolving liturgy and sacramental observances, by the way)

Birth Via Water and Pneuma

What gave people access to these Johannine ASC experiences? It was a new birth through “water and pneuma.” Like anōthen, pneuma also has more than one meaning. It can mean wind, breath, and spirit (an other-than-human person). When the Sky Vault Man Jesus got lifted up (John 3:13-15; 19:30, 34) both pneuma (Jesus handing over his breath to those below) and water flowed out. This probably continued in Johannine community baptism.

Hence, to be born of water and the pneuma means to experience Jesus as God’s Son right now. Unlike the Pauline and Synoptic Groups, the Tekna Theou members didn’t have to wait around for some Theocracy to manifest in order to prove that to everyone! Who cares about outsiders? We enter the kingdom right NOW by believing into Jesus = experience his descents from sky vault—thought the Johannine Jesus group. They enjoyed the new life of the Children of God via experiencing Jesus alive in altered states of consciousness.

Ancient phsyiognomics assists understanding here. To the ancients, like begets like. That’s why “what is born of flesh is flesh, and what is born of pnuema is pnuema” (John 3:6-8). The Johannine Jesus is not taking about some kind of American, New Age “spiritual birth” with Nicodemus. To ancient Mediterraneans if you are born of the seed of a peasant day laborer, his seed makes you of like kind, and your quality is that of the seed-donor. In contrast, to be begotten of God (1 John 3:9) means to have God’s seed determining your characteristics.

But poor Nicodemus is lost in the dark. He can’t even get the earthly things right—how can he possibly grasp the sky vault things of which Jesus tells him (John 3:9-10)? Like begets like. Without birth from above you can’t even see this (John 3:3), much less enter into and experience it (John 3:5). Birth from the flesh—by human semen, mixing of bloods, human desire for an heir (John 1:13)—cannot result in kinship with God.

But how does pneuma-birth happen? Baptism? Probably, but the Johannine Jesus does not specify this. Instead he says it is mysterious, just as mysterious as wind was to pre-scientific peoples. 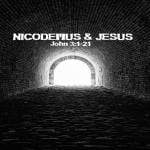 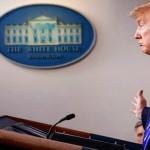 April 24, 2020 Disinfectant Cure-all, Trump, & Co-Authoring our Future
Recent Comments
0 | Leave a Comment
"Much the wisest piece about the challenges of applying Scripture to life in the present ..."
Brad of the North Meaning and the Words of Scripture
"Hmm. Nothing to apologize for? How about: Crimes Against Humanity (the Crusades). Genocide (Missionaries in ..."
Kyllein MacKellerann " Witches Burning—The Most Shameful Episode of ..."
"How about apologizing for murder?"
Mike Curnutt Witches Burning—The Most Shameful Episode of ..."
"I seriously doubt any of the people who were murdered were actually witches."
Mike Curnutt Witches Burning—The Most Shameful Episode of ..."
Browse Our Archives
get the latest updates from
Messy Inspirations
and the Patheos
Catholic
Channel
POPULAR AT PATHEOS Catholic
1