Miracle, meaning an overriding of physical laws governing the universe, is a nice post-Enlightenment word alien to the Bible.

Miracle. Jesus did many of them, right? The Synoptic Gospels, first century documents, speak of wonders and marvels,  called “mighty deeds.” “John” calls these “signs” and “works.” The word miracle is not used anywhere in Scripture. Yet many Christians readily proclaim that Jesus performed miracles and that “it is right there in the Bible.” Spurious familiarity seems to be the most trusted authority for 21st century Bible readers.

In the past two posts, we have been talking about Jesus walking on the Sea. Certain insects can walk on the surface of water, but not human beings. Recognizing scientific facts like buoyancy and how objects stay afloat, a 160lb man would have to displace twenty gallons of water with each step to stay on top of the Sea of Galilee. That what Jesus did? Is that what the Gospels are telling us Jesus is doing when he walked on the Sea?

Western Bible readers, be they believing Christians or atheists or whatever, are familiar with “laws of nature.” Therefore when they read about Jesus walking on the sea (Mark 6;45-52; Matthew 14:22-33; John 6:16-21), their understanding of the story is impacted by this auxiliary scientific background information. To do such a thing would override the “laws of nature,” physical laws governing the universe! So this story must be describing a miracle, something violating the physical laws governing the universe.

So imagine a sophisticated, 21st century Western Catholic named Stephen. Stephen is not only smart and well-educated, he’s a compassionate person. In addition, he is a veteran catechist teaching Sunday school. Stephen reads the Gospel accounts of Jesus walking on the Sea. His conclusion? “This story is claiming that Jesus had the power to override laws of nature. It says Jesus walked on water. It says Jesus performed a miracle. I believe it.”

Now imagine another sophisticated, 21st century Western person, an atheist named Ricky. Ricky is not only smart and well-educated, he’s a compassionate person. He is ardently committed to atheism. Ricky reads the Gospel accounts of Jesus walking on the Sea. His conclusion? “This story is claiming that Jesus had the power to override laws of nature. It says Jesus walked on water. It says Jesus performed a miracle. It’s complete rubbish—I don’t believe it.”

Do you know what both these very different 21st century men have in common? Besides being sophisticated, well-educated, and compassionate? They both completely wrong about the story and its meaning. Both have misread the story by way of anachronism and ethnocentrism. They have distorted its meaning.

The understanding of both Stephen and Ricky is completely alien to ancient people like the Gospel authors, Jesus, and his inner circle of followers. There is no belief or idea in the ancient world equivalent to our post-Enlightenment understanding of “physical laws governing the universe” or “natural laws.”

As scholar Richard Rohrbaugh says, whenever you move the language, you necessarily change the meaning. That goes for “nature” (physin) and “natural” (physike) as used by Paul, and then later on by Thomas Aquinas, and then later on by Carl Sagan and Neil Degrasse Tyson. Language only means what it means where and when it gets used! Move that word “nature” and you necessarily change its meaning.

“Nature” According to Paul

So what did “nature” (physin) mean for Paul? Whenever Paul talks about nature, he isn’t using the term like Aquinas would in Medieval times, or like Sagan and Tyson would in our times. By “nature” Paul means cultural custom. Therefor Paul thinks it is contrary to nature (para physin) for men to have long hair. In other words, it goes against cultural custom and is thus dishonorable.

Ancient biblical authors, you see, did not conceive of nature as did Medieval philosophers (essence as viewed as the font of its activities) or modern scientists (the physical world). It’s so easy to read later ideas from our culture (ethnocentric anachronism) back into the Gospels thereby distorting them.

If It Happened, It Really Happened!

To ancient people like Jesus, his immediate followers, and the later Evangelists, if something happens, it happens, and is therefore real. And whatever happens, the question is never “WHAT happened?” but rather, “WHO did it?” Whatever happens, it must have had a personal cause. There is no impersonal causality in the world of the Gospels.

If a human being is seen walking on the Sea, it happened, and therefore it must be real, according to the ancients. But humans can’t do such a thing, because to walk on a Sea-Demon shamefully is impossible for lowly humans! So that means that some other, higher, other-than-human person (God or a god or some other spirit) had to empower the lowly human to be able to do this.

Consider a triangle. Recognize that the concept of triangle is different from the image of a triangle. A triangle is a plane figure having three straight sides and three angles. Before you can have the concept of “triangle” you must logically first have the concept of angle—the space between two intersecting lines or surfaces at or close to the point where they meet. This is true even if both concepts are arrived at simultaneously—you cannot understand triangle without (logically, of not temporally) first understanding angle.

How then can there be “miracles” anywhere in the Bible since miracle means violating the physical laws governing the universe, something unknown to the biblical authors? That isn’t how ancient people perceived, thought about, understood, and communicated reality. Beware ethnocentrism and anachronism when reading ancient Mediterranean Scripture.

This is a delicate issue among today’s Christians. Are we deluding the Faith if we ask these questions? But there is likewise the danger of presenting fundamentalist biblical literalism as counterfeit Christianity. We have to read these Biblical stories according to their cultural context. Mediterranean culture is the first reading, the first interpretation of Scripture. 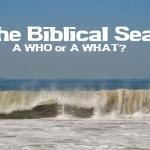 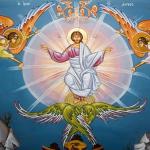 May 21, 2020 Ascension of Jesus and Other Sky Journeys
Recent Comments
0 | Leave a Comment
Browse Our Archives
get the latest from
Messy Inspirations
Sign up for our newsletter
POPULAR AT PATHEOS Catholic
1