Eucharist: The Most Important Transformation

Eucharist, the source and summit of our Christian lives, concerns unity and transformation—but what is being transformed?

Today is a day drowned in terrible homilies and pooled ignorance. Together with Trinity Sunday, on this solemnity the ground cries out to God—“the homily sucks!” And God hears the cry of the poor.

Today heard in many American Churches is talk of mind-boggling Eucharistic wonders and “scientific proofs” confirming Catholic beliefs as “true,” and “first,” and “best,” and “only.” Holiness will be relocated to the bizarre and extraordinary, far removed from the people.

By definition, a homily always explains a biblical text and applies it to life here and now. Sermons, speeches, lectures, rants, song-and-dance acts, and comedy routines have never been and never will be homilies. Ranting on about “Eucharistic Miracles” in neo-orthodox apologetics is an abuse, not a homily.

It is likewise a very popular abuse to turn today’s Gospel (John 6:51-58) into fodder for Catholic triumphalism and anti-Protestant invective. In contrast to the many failed homilies heard today, today’s Gospel itself presents the Johannine Jesus as giving a real midrashic homily. Likely, the Scriptures the Johannine Jesus explains and applies is the Palestinian Targum of Joshua 5:5—6:1 bound up with Numbers 21:6-9. (PLEASE NOTE: those Aramaic texts are QUITE DIFFERENT than NABRE translations!) These sections speak of Israel’s manna tradition and the Exodus experience.

In today’s Gospel, the Johannine Jesus group (using Jesus as their mouthpiece) explains how Jesus himself fills up what is lacking in Moses’ bread from sky vault. Put simply, forget about Judaean society and their explanations of Torah. The Sky Vault Man Jesus explains everything. Ultimately, to experience this light you have come out of “the world” (i.e., the dominant society Israel) and embed yourself into Jesus (i.e., the Johannine Jesus anti-society).

Catholics Messing Up Paul and the Eucharist

And with all these weeks in COVID-19 shut down, lay Catholics watching Mass on video have been reminded by current theological trends that they really don’t matter. All that matters is a demigod called priest, an ontologically-changed supercreature. That’s not official teaching, mind you. But that is how many parishes and diocese walk the faith.

We have to be honest in the Body of Christ. In many places, the priest is falsely presented by many Catholics to be not unlike Dr. Octopus in “Spider-man 2.” Someone who holds the power of the sun in the palm of his hand.

Are You a Believer in Miracles?

Speaking about the Catholic predilection for Eucharistic wonder-workers and miracles, Thomas Aquinas does speak about Eucharistic wonders. The Angelic Doctor claims God can manifest real physical change in the consecrated elements, turning the bread into physical flesh and blood or the appearance of a recognizable face. However, Aquinas maintained that even in such wondrous cases, the blood and flesh manifested cannot be the real properties of the risen Jesus. The risen Jesus bleeds no more!

Let’s not betray Vatican I, either in fideism or rationalism. Fides et ratio, brothers and sisters. The well-meaning performers below aren’t exactly what Vatican I had in mind…

Perpetual Adoration of the Eucharist

Perpetual Adoration of the Eucharist spreads. I know daily communicants who swear by it. The people I am recalling also have a magical thinking when it comes to the sacraments and priests. And watch how some of these lay Eucharistic Ministers behave at Church, imagining that by being physically proximate to the presiding priest makes them more holy. As if grace and holiness were quantities.

The icing on the cake is how they react to something like Black Lives Matter. Not a peep for George Floyd and countless others tortuously murdered. Silence on the issue, except prayers for their beloved POTUS who is under constant attack from the Devil. But let’s not drift there.

I also know brothers and sisters involved in such liturgical ministries without the ignorance or lack of sensitivity to justice. I know daily communicants and adorers who are transformed. They are examples in my life.

If such a devotional practice suits you, that’s all good. But let’s not force our youth and young adults into it, demanding that everyone must take part in it, and if they don’t, therefore that shows something defective about their faith-walk. Don’t try to legislate private devotional forms. You can’t.

Super-Catholics might be astonished to realize that for one thousand years of Christianity there was no practice of Eucharistic adoration. Nothing. Zip.

It wasn’t until the 1300s that Eucharistic adoration began in the West, and never the East. While the Eastern Church believed in the Real Presence, it did not develop this devotional practice. I once reminded this to a young “Storm-trooper of orthodoxy” Roman priest in light of ecumenical talks. Without blinking, he informed me that Eastern Christians, whether “O” Orthodox or “Uniates,” are less developed in understanding Christ than we Latin rite Catholics.

What an asinine thing to say. An asinine man who expects head-nodding from everyone, all day long spouting unchecked asinine things in his echo chamber surrounded by yesmen.

So why did this happen in the 12th century West? Some rejected the Real Presence of Christ. Others misunderstood it due to horrendously bad education. Peasants would go Church to Church on Sundays looking for the Host to be raised—maybe it would give them good crops or fix the illness in their eyes.

Human beings don’t stop being the capacity for God when they poorly understand the liturgical and sacramental life of the Church. In such a sad state of affairs, they seek to fill their God-shaped hole with private devotions. So in such situations, private devotions flourish.

Hence, some Medieval folks promoted devotions like Benediction of the Blessed Sacrament in order to reaffirm the faith.

Time passed. Unfortunately, adoration and other Eucharistic devotions evolved in a disconnected way from the Eucharist itself—meaning the liturgy. Many Catholics forgot that Eucharist IS GREATER THAN the consecrated species. Jesus can never be Emmanuel (God-with-us) without the “us.”

When Does the Eucharist Begin?

Sadly, even today, over half a century following Vatican II, faulty thinking persists. It eliminates the relevance of “us.” We tend to place all of out focus on bread-transformation rather than us-transformation. Read the Gospels. Jesus was about metanoia.

We Catholics should ask—when exactly does the Eucharist begin? Is it when the presider says “the words of consecration”? No. Indeed, the Church officially accepts as valid one Eucharistic Prayer which completely lacks the words of institution at all! Officially, the Church recognizes that Jesus becomes sacramentally present in the Anaphora of Addai and Mari.

So when is Christ present? When the Body of Christ, the people, gathers—that’s when. Jesus is really present in the community. Sadly, U.S. Catholics tend to miss this, and I would say it is far more devastating than being mistaken about the consecrated species.

Getting Real with Real Presence

Surely Catholic teaching on the Eucharist speaks about the sacrament of the Eucharist also. There has been a transformation—bread and wine become the body and blood of Christ. But this cannot be all that Eucharist is and means. That transformation is just one part of the entire action called Eucharist. It is such a sadness that devotional extremes have made Catholics lose sight of this.

Consider—if the Eucharist were nothing more than the consecrated sacrament, what the hell is the point of the ceremonial rite? Why not just line up the laity outside the steps, have the priests “confect” Hosts beforehand, and distribute them? Why all the Scripture readings, prayers, sign of peace, songs, and other elements? It must be that Eucharist is more than priests making bread turn into Jesus, huh?

The purpose of a rite, whether ritual or ceremonial, is transformation. But who gets transformed? Our liturgies evolved to transition people out from regular, culturally “ordinary” reality into alternate reality. Ceremonial rites are like regular timeouts in the football game of life. They are for the benefit of the social group. For Eucharist (Mass), that would be the Church.

Jesus does not get lonely in our tabernacles. He is not our holy prisoner. “Diosito” doesn’t need a chorus to sing him to sleep each night. And if you scratch the Host, it will not bleed. Enough with the gross and crudely physicalist notions, fellow Catholics! Note well the adverbs used to describe the Real Presence—truly, really, and substantially. Do you see “physically” there? The Church, throughout its history, condemns devotional extremes and bad thinking.

Our world desperately needs our transformation, us Christians being really present. Are we really present? The signs of the times say otherwise. 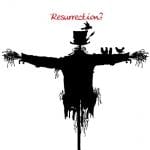 June 12, 2020
Straw Man Predilections & How Resurrection was Experienced
Next Post 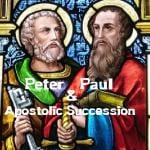 June 29, 2020 Succession of Apostles on the Feast of Peter & Paul
Recent Comments
0 | Leave a Comment
"How dare you suggest that you can find hope and encouragement to help others by ..."
Ame Progressive Jesus Is Also Fake
"Good to know that the infinite Son of the infinite God is not allowed to ..."
alwayspuzzled Progressive Jesus Is Also Fake
"“ our liturgies evolved out of early shamanic meals and rituals.” Have you expounded on ..."
Seth Fasting—Why Did New Testament People Do ..."
"In the past, MI wrote some very insightful and profound analyses and reflections. Occasionally, he ..."
alwayspuzzled Sharing? Miracle? Both? Nope!—Multiplying Loaves and ..."
Browse Our Archives
get the latest from
Messy Inspirations
Sign up for our newsletter
POPULAR AT PATHEOS Catholic
1