Was Jesus a shameful or honorable son?

Perspective goes a long way in how we understand things. Our 21st-century Western perspective couldn’t be more different from our first century Mediterranean ancestors in the faith.

We just began a brand new weekly Scripture study over at the Bible Alive YouTube channel that explores this perspective issue. Before reading the rest of the blog post, you might want to watch the presentation here—

According to Context Group scholars like Dr. Bruce Malina, the biblical world is of a cultural perspective so alien to the individualism treasured by U.S. Christians. Such Mediterranean people are all dyadic. In other words, the Mediterranean personalities featured in Scripture were collectivists. Thus, apart from fellow group members, they’d have no sense of identity, no understanding of their social role and status, and be as good as dead. Because outside of some group, biblical people were clueless about everything, including duties and privileges. Ultimately, they’d be totally lost, blind to what behavior was honorable, and what was shameful.

Everything in the Mediterranean cultural world of Scripture is keyed to a group-centered perspective. Everything gets organized by belongingness or group-centeredness. In extreme contrast, in our Western world, group-orientation, no matter how valued it is, almost always gets subordinated to individualism. But not so the world of the Gospels! Back then, people belonged to a group-identity and a group-conscience. And it was the Mediterranean family that primarily structured this group-self.

Therefore, according to the Bible, success in life must involve a group-happiness, interpersonal contentment within the group. Hence any notions of individualistic salvation apart from group-wellbeing found in the Bible guaranteed is just a mirage. If you see it there, rest assured your culturally-informed brain has tricked you into reading it into the text. The Bible lacks an individualistic perspective. There is no “personal Lord and Savior” to be found in Scripture. It’s just not there, folks.

Throughout the Mediterranean world, the core cultural values are honor and shame. You better believe this is also true for Scripture, including the gospels, Mediterranean documents all. And if we are going to take the prefix “in” of incarnation seriously (and Christians must), we have to accept that honor and shame mattered much to Jesus as well.

But what is honor? According to Malina, honor means socially acknowledged worth. In other words, honor is a group’s claim to worth and the public recognition of that claim. But to make such a public claim minus the public acknowledgment of it would constitute the very opposite of honor. More on that, momentarily.

The point is that honor is a publicly acknowledged public claim of worth. Therefore if you “have honor,” you possess publicly accepted worth. And when you are ascribed this worth or acclaimed for it, this is what “to be honored” involves.

But what results when your claim to worth is publicly denied, repudiated, or just left unrecognized? Malina explains this dishonor is shame in the negative sense. Therefore, negative shame is the opposite of honor. Ultimately, no one in the Bible, including God and Jesus, desires to be shamed, meaning to be denied or diminished in honor.

But Malina explains that there is also a shame in the positive sense. When you take care about your reputation and good name (i.e., your honor), this means that you “have shame.” This concern for honor is what is meant by the question, “Have you no shame?” Ultimately, every biblical person, including God and Jesus, desires to have shame.

The Mediterranean cultural world of Jesus is an honor-shame world. In contrast, ours is a win-guilt society. Honor and shame are public realities. But our Western sense of winning (personal accomplishment) and guilt are introspective, psychological realities. These terms are not interchangeable and this is not semantics. Without honor and shame understood, forget about any chance of understanding Scripture.

Now, with that understanding, let’s try to see Jesus from a Mediterranean perspective. Was he an honorable son, man, and Israelite? Or was he shameful?

If we really read the Gospels honest to the Mediterranean cultural perspective, things look pretty bad at first blush. At least on the surface, Jesus doesn’t look all that honorable.

Let’s begin with Jesus’ shameful origins. Mary, his mother, was found with child before living with her husband. Therefore, Jesus’ origins were embarrassing. This was because at Nazareth and beyond, there was uncertainty concerning his biological father’s identity. Keep in mind that the people who knew Mary and Jesus lacked our centuries of Christmas sentiment.

A Galilean peasant nothing-person like Jesus growing up in a nothing-place like Nazareth would give him a low honor-rating, but not necessarily a bad honor-rating. Even beggars had some honor in Jesus’ world, and, provided they acted honorably, it would be a good rating. Every Mediterranean person, no matter how lowly, receives an honor rating just by being born. Every Mediterranean must provide defense and protection for this ascribed honor rating until their final breath. This birth-given honor rating can never be augmented, only besmirched.

Given Jesus’ mother’s dubious pregnancy, we are off to a bad start.

Add to this that almost certainly, Jesus, the artisan, had to travel outside his tiny village for work. In the ancient world, itinerant people like Jesus were considered to be social deviants.

Then, as if things couldn’t get worse for his honor rating, Jesus committed social suicide (Mark 1:9). For Jesus to go to the prophet John for baptism meant abandoning his family and village life, his very identity.

“Self” in the Bible always means group-self. Thus, by leaving his home village, in a way, Jesus killed himself. By this, I mean that Jesus died to his Nazareth Group-self and joined to a new Group-self, that of the faction embedded into John the Baptist. To the perspective of onlookers, this would appear shameful!

But the Synoptic Gospels recall that the prodigal son eventually returned to Nazareth. When Jesus’ biological family in Nazareth publicly command him to see them and come home with them, they make a public claim to honor (Mark 3:33-35). Jesus publicly refuses and thus publicly shames them.

Worse, Jesus has once more joined with a new coalition, forming a third group-self he now parades around Nazareth! When he joined John’s group-self at the Jordan, Jesus insultingly cut off his village and family. And now he returns, having established a new, surrogate kinship network (Mark Mark 1:16-20; 3:33-35)!

Plus Jesus, Galilean peasant artisan, is now acting like God’s prophet? In a world forbidding upward social mobility, this shameful son must be shamefully stepping outside of his fixed social boundaries! That’s why his fellow villagers wanted to kill him (Luke 4:14-30). According to their perspective, Jesus is a living stain of shame on their group-self.

Perspective on Trying to Save Jesus’ Life

That’s why Jesus’ biological family declares him crazy—according to Dr. John Pilch, it was a Middle Eastern strategy to save his life (Mark 3:21). Shame someone in the ancient Mediterranean world, like Jesus routinely did, and the shamed party is honor-bound to kill you. The only way the transgressor Jesus could be saved is if his biological kin-group declare him crazy. But now they have a 24/7 job keeping him at home, and he might be better off dead, except for being some help to the family.

And how does Jesus respond to Mary and his other family members’ life-saving attempts? He rejects their attempts, shaming them. Now Jesus has a new family, and he lays out what it means to be his mother, his sisters, and his brothers. From the perspective of outsiders to his Jesus-group, Jesus’ actions would be considered disgracefully shameful.

Perspective on Jesus’ Career and Death

Follow Jesus’ career as a holy man and folk healer and watch the powerful enemies he generates. Look how they frequently bring up his shameful behavior and lowly origins (Luke 15:1-2; John 7:40-42). Jesus repays them in kind by publicly insulting them. Never forget that “meek and gentle” Jesus was a Mediterranean master of insults.

In fact, given that he behaved this way, no one should be surprised how Jesus’ earthly existence ended up. That’s ultimately what the circum-Mediterranean cultural world does to shameful sons. Right in line, the Israelite tradition recommends death to persistently disobedient sons (Deuteronomy 21:18-21).

Understand that when Jesus’ powerful enemies call him a “glutton and a drunkard,” they are really calling him a persistently disobedient son. And they are alluding to Deuteronomy 21:18-21, thereby saying that Jesus ought to be put to death.

As it turned out, Jesus was put to death, the most shameful death of all. And that’s how it ends up for shameful sons.

Except that isn’t how it ended for Jesus, is it, fellow believers? As it turns out, Jesus was not shameful or disobedient, despite appearances to the contrary. Jesus obeyed his Patron, the God of Israel. And God exceedingly honored Jesus, raising him from death, establishing him messiah and Cosmic Lord with a view to forthcoming Israelite Theocracy. This is how the New Testament, in the light of his resurrection, understands his unsurpassable honor.

It turns out that Jesus did, in fact, belong to a higher social order. Believers are clued into this early on in the Synoptic Gospel story, at his baptism (Mark 1:9-11; Matthew 3:13-17; Luke 3:21-23). The sky vault voice informs onlookers, speaking to Jesus—“You are my beloved Son; with you I am well pleased.”

Then, in the Transfiguration experience, onlookers are informed to listen to Jesus (Mark 9:7; Matthew 17:5; Luke 9:35).

Hence the Gospel authors grapple to overcome various hurdles to show Jesus’ correct honor rating—unassailably high and testified to by none other than God. 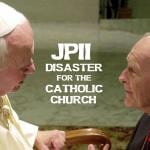 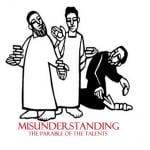 November 15, 2020 Talents—Another Parable Misunderstood by American Christians
Recent Comments
0 | Leave a Comment
Browse Our Archives
get the latest from
Messy Inspirations
Sign up for our newsletter
POPULAR AT PATHEOS Catholic
1 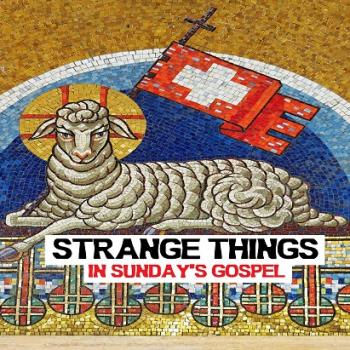 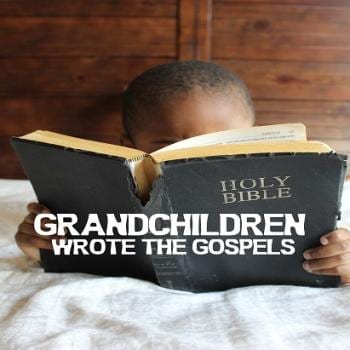 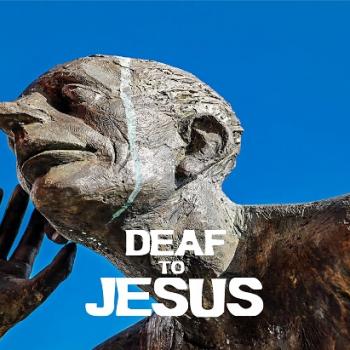 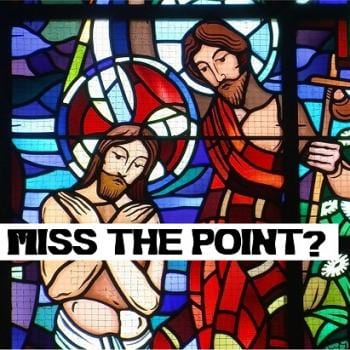