Is “The Chosen” Realistic to the World of Jesus?

This is the first of a series of posts about the good and bad of Jesus-movies like “The Chosen.”

Some weeks ago, I finally gave “The Chosen” a fair shot. Months earlier, I found some clips of it moving, impactful, and well-acted. I get sentimental too, okay?

But even those highlights were soaked in Western distortion. This amplified a thousandfold when I watched entire episodes. As with “The Passion of the Christ” before it, “The Chosen” doesn’t give you the Gospel scenes realistically, but instead Westernized people playing with accents and costumes. The Jesus of “The Chosen” is yet one more congenial Jesus.

Why don’t Jesus Movies “get” Jesus? Here is a video presentation for you—

Remember “The Passion of the Christ”? Mel Gibson’s film remains beloved, considered by many to be the gold standard in dramatic presentations about Jesus’ life. Some tragically imagine it to be as if Gibson time traveled and actually filmed the last hours of Jesus’ life.

This Thursday, February 25, marks the 17th anniversary of Gibson’s “Passion.” Working in campus ministry, I vividly recall a Lenten screening at Florida International University seven years after its release. A particular professor, brilliant in math but like a kindergartner in the Faith, assured me that the movie “is at it was!” She was quoting Pope John Paul II’s reported reaction when he had screened “The Passion.”

When I respectfully disagreed, our friendship of over five years ended. It was dead on the spot. She never spoke to me again. But I later learned that Professor Super-Catholic, a daily communicant, tried to get me fired.

♫…And you’ll know they are Christians by their love!♪

No, “The Passion” is not “as it was.” Even though in several ways “The Passion” is a beautiful and brilliant film. But like D. W. Griffith’s “The Birth of a Nation,” “The Passion” is likewise terribly problematic. In some ways, it is a circus show of terrible theology and morbid Christology. It is blatantly anti-Semitic. Terrifyingly, Catholics use “The Passion” as a vehicle to propagate the faith.

Mention any criticism of “The Passion” to many a U.S. Catholic, and watch what happens. Typically, you’ll get, “I just don’t understand why people have a problem with the greatest Jesus movie ever made!” or some similar nonsense. But is it really, “I don’t understand”? Or rather, more honestly, “I refuse to understand”? Because actually, taking criticism of “The Passion” in a serious manner demands repenting of Christian triumphalism, theological boiler-plate, and disgusting anti-Semitic tropes. Who wants to admit these, much less do it?

Writer and director of “The Chosen,” Dallas Jenkins, is a fundamentalist. Jenkins is the son of Jerry B. Jenkins, co-author of the prolifically ignorant “Left Behind” book series. He has high goals for “The Chosen.” Jenkins wants to raise funding for six or seven seasons of it. He may accomplish this. The first season, completed in 2019, has eight episodes.

The show is free to watch and very popular among many U.S. Christians, including Catholics. Like “The Passion,” Jenkins’ “The Chosen” has the veneer of presenting an “authentic depiction” of what really happened. Far too many Catholics, including religious and clergy, mistakenly think it is the real deal.

What To Think of “The Chosen”?

What I am about to lay down should not surprise faithful readers. If you’ve read this blog carefully, you should readily understand why I would take a serious issue with this series. “The Chosen” is regularly praised by many as “a realistic portrayal of Christ’s life and those who encountered him.”

Jenkins makes these five pitfalls to authentic Scripture study his close friends. They drown his series. You can see this right off the bat in the first episode, “I Have Called You by Name.” It begins some evening in Magdala, 2 A.D. A father coughs, sitting by the entrance to his home. Is it a Bedouin tent? Or his shop?

Then, his young daughter emerges, frightened about something. We learn she suffers head problems. Who is this girl? Could this be Mary Magdalene, maybe? We’ll see.

Daddy Dynamics in “The Chosen”

“Abba” (a term Jenkins apparently misunderstands to mean “American daddy”) points up to the new star in the sky. No doubt “The Chosen” means the Christmas star of “Matthew,” found in no other ancient writing. However, it’s not honest to what “Matthew” describes in his infancy narrative, namely, a comet. Our first unwarranted harmonization of elements from different Gospels is mixed up together like a cake batter.

Presumably, this is two years since Jesus’ birth. Does Jenkins think Jesus was born in the year 0? Does he believe, like many in the pews, that there actually was a year 0? I bet you he does! But even if Jenkins thinks that the year before 1 A.D. is 1 B.C., Jesus was born probably born a few years earlier.

The little girl is terrified. Then, Abba-daddy tells her to memorize a bible verse, not unlike an American Evangelical daddy. Later on, this pays off when she gets saved, like an introspective U.S. person accepting her personal savior Jesus. But was that how biblical people really viewed salvation?

“The Chosen” vs Middle Eastern Parenting

What role does a (Middle Eastern) biblical father have in parenting daughters? Did you know that he has no role whatsoever in parenting any children until they reach puberty? Even then, he only “parents” (read: brutally physically disciplines) his post-pubescent sons, never his daughters. In fact, he has no role in raising daughters—that’s the job of women.

Does that shock you? I bet you aren’t familiar with Sirach, Proverbs, or Hebrews then, are you? I know Bible-quoting Jenkins isn’t. For all his Bible-quoting, he doesn’t have a clue about what is being communicated.

What if I told you that biblical daughters were seen as posing lifelong problems for biblical fathers? The biblical daughter is a personified heart-attack. What does that do with this cute scene at the start of “The Chosen”? Why not read Sirach 42:9-10 and list six concerns that keep an Israelite father awake at night. Then tell me about how culturally plausible this scene is with “abba” and the little girl of Magdala.

Jesus Sunday School in “The Chosen”

There is another endearing scene with children featuring another adult male. The adult is Jesus, distorted into being an American Sunday school teacher with a Middle Eastern accent. At one point, Jesus tells his star pupil, a young girl, to let others try and answer his questions. And like a good American teacher, he gives her a wink.

Now, for a moment, let’s pretend that I am the Cowboy from “Mulholland Drive” (a genuine spiritual masterpiece). And like the Cowboy, I tell you to “stop for a little second, and think about it.” I want you to think about winking. Can you try that for me?

Is winking the same in every culture? What does winking mean in the cultural world of Jesus? Did you know that Proverbs 16:30 assigns a certain culturally-conditioned meaning to “winking the eyes”? Look how winking eyes plays into Proverbs 6:12-15 (NABRE, “shifty of eyes” means winking) describing a worthless person who needs to be destroyed.

Ever wink at a child? In our Western culture, does winking suggest you are trying to harm or kill someone with the deadly Evil Eye? It does in the Bible, folks. The Evil Eye was something biblical people believed in as much as we Westerners believe in oxygen!

Winking or Evil Eye in “The Chosen”

Of course, mainstream U.S. folks don’t believe in the Evil Eye. And because we will not tolerate a Jesus who doesn’t buy American values and American understandings, we simply can’t see Jesus believing in the Evil Eye either. But Jesus most assuredly believed in the power of the Evil Eye. He even took apotropaic measures to protect his life from its attack! Look how he healed fellow Israelites (Mark 7:23; Mark 8:23; John 9:6)—ever wonder why he used saliva in healing the blind? Saliva as therapy? That’s not biomedical science! Incarnation is messy, folks.

Do you see how culture suggests or proposes certain behaviors and assigns these behaviors culturally-specific meanings? Jenkins and the actor who plays Jesus (Jonathan Roumie) apparently don’t. They either don’t know or don’t care. But like Gibson, they surf the ignorance-wave of “it is as it was!” Please don’t pool ignorance about “The Chosen” being this incredibly realistic portrayal of Jesus and friends from first-century Galilee.

More To Come on “The Chosen”

The Cowboy from David Lynch’s masterpiece “Mulholland Drive” has salient wisdom for us Catholic Christians reading Messy Inspirations, my blog, and watching my Bible Alive Presentations videos. I might paraphrase it like this—

“A [person’s] attitude goes some ways in determining how their faith-walk might be. Is that something you might agree with?”

This is just a kiss. More on “The Chosen” tomorrow. Much more. 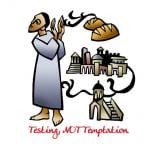 February 21, 2021
Testing, Not Temptation—Jesus & Satan in the Wilderness
Next Post

February 28, 2021 Aloneness in Alternate Reality—the Transfiguration
Recent Comments
0 | Leave a Comment
"No"
Ame Apocalypse & 666: What Does this ..."
"That's right. We can never be certain so let's not try. /s"
Raymond Timothy and Titus Are Forgeries, and ..."
"That's right. Context doesnt matter. Knowing anything about the history and background of Scripture just ..."
Raymond Timothy and Titus Are Forgeries, and ..."
"If you have time please take a look at this.Obama lottery 666 you have got ..."
geirsmith Apocalypse & 666: What Does this ..."
Browse Our Archives
Related posts from Messy Inspirations