It turns out that the Last Supper wasn’t Passover, unlike what some Gospels interpret.

Yesterday was Corpus Christi, and the Gospel reading turned to Jesus instituting the Lord’s Supper (Mark 14:12-16, 22-26). According to “Mark,” Jesus’ final meal with his followers took place on the night of Passover. But what if the Last Supper wasn’t Passover?

Here is a video about how the Last Supper wasn’t Passover:

None of the Gospels are fact-precise transcripts of what Jesus said and did. In some ways, the different Gospels sometimes come closer to the historical Jesus, but they are far away other times. Often, the Synoptics present Jesus in ways closer to how he actually was than “John” does. Yesterday’s Gospel for Corpus Christi (Mark 14:12-16, 22-26) is a rare example when “John” is more historically probable than the Synoptics.

What am I talking about? What was the final meal the prepaschal Jesus shares with his innermost circle of followers? The Synoptic Gospels—“Mark,” “Matthew,” and “Luke”—all present this meal as a Passover meal. Regardless, the historical final meal of Jesus likely wasn’t. The historical Last Supper wasn’t Passover.

According to scholars like John Pilch, these elite Israelite authors interpreted and presented the Last Supper this way for different reasons. One reason was to convey that Jesus was a faithful, observant Israelite. Despite the slander of his enemies, Jesus observed the traditions of Israel.

Poor Jesus and His Last Supper

This is highly unlikely. Jesus and his followers were dirt poor. Starving Galilean peasants, how could they afford a lamb or any meat, even if they wanted to share a Passover? And consider—if you, a poor Galilean, had only one animal, would you sacrifice it and eat it? No way! As we have said before, even if Jesus wanted to, he was too poor to maintain the Great Tradition (Mark 7:2-5).

Therefore, in one detail, the Gospel called “John” is more historically probable than the Synoptics. According to “John,” this final meal shared by Jesus and his innermost circle was not a Passover meal (John 13:1-2). It was around Passover time, but not on Passover. We know this because, according to “John,” evil forces crucified Jesus at the very beginning of Passover (John 18:28; 19:31). Hence, in “John” anyway, and likely in the historical Jesus’ own situation, the farewell meal happened before Passover.

Who prepared sacred meals like Passover in Jesus’ culture? Males (Exodus 12:3-4, 24). It makes many Americans feel good to see religious art depicting women present at the Last Supper with Jesus, sitting at his table even. But did this really happen?

There are critical theological implications and pastoral reasons in understanding the roles women had as servant-leaders in early Jesus groups. Women were even overseers in some communities. In many places, shamanic females were among those who broke the bread in Alternate Reality with Messianists and the earliest Christians.

(By the way, if that last sentence confuses you, it is perfectly normal and tragic. Our culture is deprived of gifts God gave all humankind. Read about them here.)

But ethnocentric anachronism will not serve our need for female leadership in today’s Church. In Jesus’ setting, Israelite women and prepubescent boys and girls ate separately from men and postpubescent boys. That was almost everywhere in the Mediterranean of Jesus’ day. Women and children would not have been at the Last Supper; however, it actually happened or even how the Synoptics and “John” later interpreted it.

Last Supper Wasn’t Passover, But It Was a Ceremony

According to John Pilch and other anthropologists, meals like the Last Supper are ceremonies, not rituals. As such, ceremonies occur regularly and predictably, confirming and legitimating the roles and statuses of persons inside a community. In contrast, rituals (e.g., baptism) are metamorphoses affecting a change in status.

There was a grammar to ancient Mediterranean meals. Therefore, a meal like the Last Supper communicates. But what do meals communicate?

Unlike many American families, Mediterranean people, collectivists, ate together at meals. This communicates that participants shared the same values and ideas. But, more importantly, it says they share the same social status—only social equals ate together (Mark 2:15-17).

Everyone watched everyone in Jesus’ social world—whom you dined with said something, and where you sat at the banquet did as well (Luke 14:7-11).

Indeed, there is a grammar to the ancient meal. Thus, where you dined said something (Mark 6:35-36), as did what you consumed (Luke 7:33-34). So also the preparation of the food (John 21:9) and the utensils used (Mark 7:4) communicated much. Likewise, the exact meal time said something (is it Passover?—Mark 14:12, or before Passover?—John 13:1-2). And what was discussed at the table conveyed tremendous meaning and significance.

As Pilch explains, Jesus’ final meal with his followers definitively glues together their relationship. He performs a prophetic sign action in breaking the bread and sharing the cup, transforming them into himself and the redeeming rescue of his followers that will soon be accomplished by his death and resurrection. This is a true symbol.

Pilch explains further that the anonymous authors of the Synoptics added meaning to Jesus’ final meal by interpreting it as the Passover ceremony. They communicated it as a remembrance ceremony. According to Pilch, “remembrance ceremonies” make present past events. Thus, celebrating the Passover makes present God’s past salvific action for God’s people today. Would this not also apply to those who repeat and celebrate the Eucharist?

And yet, unlike peasants long ago, we post-Industrial Western Christians have produced a meta-self inside us, a Jiminy Cricket constantly commenting on every lived experience. This “meta-self” prevents total absorption into the moment, crippling us from doing little more than intellectually and emotionally participating in symbols. So our remembrance is little more than mental or sentimental, instead of flying up into the sky vault and experiencing the heavenly banquet with the living Jesus.

While Last Supper wasn’t Passover historically, that does not empty it of meaning. 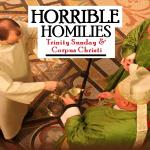 June 16, 2021 Loki: Omniscient Timekeeper & Free Will
Recent Comments
0 | Leave a Comment
"No"
Ame Apocalypse & 666: What Does this ..."
"That's right. We can never be certain so let's not try. /s"
Raymond Timothy and Titus Are Forgeries, and ..."
"That's right. Context doesnt matter. Knowing anything about the history and background of Scripture just ..."
Raymond Timothy and Titus Are Forgeries, and ..."
"If you have time please take a look at this.Obama lottery 666 you have got ..."
geirsmith Apocalypse & 666: What Does this ..."
Browse Our Archives
Related posts from Messy Inspirations