Anti-language fills the Gospel of John, and its author belonged to an antisociety, not a university of theologians.

We’ve been exploring eating Jesus’ flesh and drinking his blood in John 6. We have seen that “John” wrote a Gospel, not about ideas, but ensuring interpersonal relations and group cohesion. Hence, he relexicalizes, employing new words for realities not ordinarily referred to with those words. And “John” also overlexicalizes, using too many words and phrases to express the same meaning. In other words, the Gospel called “John” is a text of anti-language.

Here is a video presentation about Johannine anti-language:

Since “John” is a Gospel of anti-language, this demands that the Johannine community must have been an antisociety. According to Michael Halliday (American Anthropologist, 1978, p. 171), “Anti-language” is the language of an “antisociety,” social groups “set up within another society as a conscious alternative to it. It is a mode of resistance, resistance which may take the form either of passive symbiosis or of active hostility and even destruction.”

Whether vagabonds of Elizabethan England, criminals in Calcutta’s underground, or people involved in the American drug trade and prison culture, these groups are all antisocieties. So too was the Johannine group that produced the fourth Gospel.

The anti-language used by all these groups expresses their social experience and keeps outsiders out. Therefore, it isn’t meant to help outsiders understand them. They don’t want that. Instead, it was about keeping group-members in.

So forget about the Johannine antisociety evangelizing people “out there.” This community dropped that mission like a bad habit once they became an antisociety, probably during the 80s CE.

Watch how “John” overlexicalizes. He does so because of his interpersonal intention for group cohesion. This is crucial for “John.” Carefully read his gospel narrative and note WHO is involved, as well as OF WHOM and TO WHOM Jesus speaks. It will always be indicated by the set of words bearing the same denotation but with a highly different connotation. Again, “John” isn’t about communicating ideas but rather is interpersonal, concerned with group cohesion.

Therefore to believe, come, abide, follow, love, keep words, receive, have, see, eat and drink are Johannine synonyms for discipleship actions. They all mean the same thing in the interpersonal context—group cohesion, stick like glue together!

Are you claiming?
= Do you belong to a gang?

Hangin’
= Not directly involved.
Hustler
= Not into gangs, strictly out to make money or impress girls.
Ice cream truck
= Vehicle used to sell drugs.
I’d rather be judged by 12 than carried by 6
= I’ll kill you before you kill me.
Jackin’
= Robbing others.
King
= Highest-ranking gang member.
Kite in the wind
= Letter in the mail.
Knockin’ boots
= Having sex.
K Swiss
= Kill slobs when I see slobs.
Love
= Rock cocaine.
Married
= Joined a gang, group.
Nut up
= Fake ignorance or stupidity.
OG
= Original gangster. Old gangster or organized gangster.

Old bird
= Mother.
Old jude
= Father.
One time
= Police officers are near.
Pancake
= Person who becomes a homosexual due to his experience in jail.
Poor box
= Container for the items collected by gang members as dues or payment for protection.
Put in some work
= Doing a shooting.
Queen
= Female gang member.
Rig
= Combination of hypodermic needle, bottle cap, and string to tie off an arm before injecting drugs.
Road dog
= Close friend.
Rock star
= Crack-addicted woman who trades sex for drugs.
Safe house
= Place where large amounts of drugs and money are stored.
Sell out
= To betray your race.
Snatch a birth date

Do you see how many terms related to key interests for the gangs? Note the emphasis on gang boundaries and violating boundaries, women, and drugs, and don’t miss the relexicalizing! You see this same tendency in Johannine anti-language.

Context Group scholars Bruce Malina and Richard Rohrbaugh find it curious that, generally speaking, recent antisocieties relate to the law negatively. Either they exist on the margins of the law or are lawbreakers, outlaws. But they are not outside society. Instead, they are within society, albeit in a hollowed-out social space. By their anti-language, they resist and undermine the law.

Therefore it is manifestly significant to note that the Johannine group was not rejected by their enemies because of anything proposed by the Fourth Gospel! This anti-language Gospel does not present any beliefs or attitudes that resulted in the expulsion of the Johannine group from the dominant society.

Instead, the anti-language Gospel of “John” reflects the alternate reality established by the Johannine antisociety. This alternate reality opposed the dominant society of first-century Israel, referred to in “John” as “this world” and “the Judaeans.”

Society Views the Antisociety as…

And how did “this world” see the Johannine antisociety? Either marginal law-keeping misfits or worse, transgressing outlaws.

The anti-language Gospel called “John” reveals the Johannine group to be an antisociety. That means this group was an antisocietal collectivity established within a dominant society as a conscious alternative to it.

The anti-language Gospel of “John” is just like all anti-language. It was consciously employed for strategic ends. Defensively, the Gospel worked to maintain a social reality through group cohesion. On the other hand, “John” offensively resisted and protested “the world” (the dominant society of first-century Israel).

Significantly, many anti-language words and sentences lack equivalent meanings in the language of the dominant society. Sorry, Greek-proficient Bible readers! This means that statements like “I and the Father [God] are one” (John 10:30) and “Truly, truly I say to you before Abraham was, I am” (John 8:58) were socially meaningless in the Greek used by Hellenist Israelites (e.g., Paul and “Mark”). Just as socially meaningless would be the Johannine identification of Jesus of Nazareth with the preexisting Word of God become flesh (John 1:1, 14).

The anti-language of “John” was truly maverick, indeed, a Gospel from outer space! Paul, “Mark,” “James,” “Matthew,” “Luke,” and others wouldn’t know what to do with its anti-language!

It’s the same with the anti-language of our contemporary antisocieties. Society at large finds no value in treasured gang roles (e.g., king, don, general). Of course, we can and do understand these expressions, and we can translate them adequately. But the anti-language propositions won’t function as a language with any verifiable social meaning in the ordinary language’s semantic system.

This is true of the anti-language Gospel called “John” and its relationship to the Greek used by Hellenist Israelites. It applies to contemporary Israel’s “religious” language, also. And in particular, it applies to the language of other New Testament Jesus groups as well. Significantly, in all non-Johannine New Testament writings, you will not find anything like John 1:1, 14; 8:58; and 10:30.

Antisocieties don’t last. Eventually, the Johannine antisociety dissolved. Its anti-language Gospel survived and has passed down to us, but it was inevitably re-contextualized. Even though the anonymous author of “John” wrote this anti-language Gospel for members of his antisociety, that isn’t how his document has been understood for the past two millennia. Traditionally, words and sentences in “John” were understood according to ordinary Greek.

Therefore, the anti-language expression “I and the Father are one” ordinarily is understood as if Jesus is providing a concise description of his own self-understanding. This could not have been the case.

How did this problem happen? Anti-language only makes sense in its antisociety in conflict with the dominant society. Therefore, once the Johannine antisociety dissolved and the conflict ended, the Gospel began to be read among ordinary ancient Mediterranean messianists. Soon after, the anonymous author became “Saint John, the Theologian,” providing a cornucopia of new information about the nature of Jesus, about which all other New Testament authors were oblivious.

God must be one helluva Jazz player, huh? 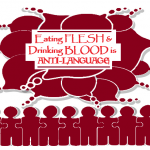 August 7, 2021
Eating Flesh and Drinking Blood is Anti-Language
Next Post 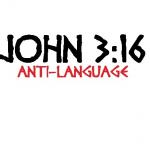 August 11, 2021 Johannine Anti-language
Recent Comments
0 | Leave a Comment
"No"
Ame Apocalypse & 666: What Does this ..."
"That's right. We can never be certain so let's not try. /s"
Raymond Timothy and Titus Are Forgeries, and ..."
"That's right. Context doesnt matter. Knowing anything about the history and background of Scripture just ..."
Raymond Timothy and Titus Are Forgeries, and ..."
"If you have time please take a look at this.Obama lottery 666 you have got ..."
geirsmith Apocalypse & 666: What Does this ..."
Browse Our Archives
Related posts from Messy Inspirations