Beautiful: A reflection for the day after Ash Wednesday

Beautiful: A reflection for the day after Ash Wednesday February 14, 2013 michaboyett

I wrote this post two years ago, when Brooksie was known only as T-Rexy. (These days he’s still “T” most of the time at home.) It’s a reflection that still feels relevant these two years later.

Wednesday night, as I entered the church nursery where August had been playing while I was in the Ash Wednesday service, my son looked up at me, first in joy (I love how the simplicity of my presence brings him happiness) and then in confusion. The ashes on my head were anything but subtle. I’d been toward the end of the line of a few hundred souls who’d been marked before me. Lots of forehead grease had given the ashes the distinction of looking more like ink than anything. The black cross on my head was prominent and ugly (as is intended, I suppose).

“Oh,” he said as he reached up to feel it and then looked down at his own fingers, now covered in grime. “Look!” he shouted, pointing to another woman gathering up her little boys at the same time, “That Mommy has one too!”

We walked home the five blocks in the dark of evening, a rare treat for both of us, who seem to rarely leave the house after five these days. And when we made it back to our apartment and I squatted in the hallway to remove his shoes and jacket, my son touched the cross on my head again and said, “You’re beautiful, Mommy.”

There are some things about August that I, despite being his biggest fan of all time, can admit are weaknesses. He’s got a stubborn streak that leads him to question or reject just about any hard line we draw for him. I’ve been kicked and tantrumed out the wazoo by this kid…and most of the time it has to do with his not wanting to brush his teeth or walk up the stairs or put on clothes. Having my mom here (while we wait for the baby to come) has helped me clarify (once again) that I’m dealing with a kid here who doesn’t just rebel like a normal two year old. I look at my mom and she shakes her head. “He’s just really stubborn, Micha,” she says. And her saying so is a great relief.

In the midst of his ability to really make things difficult, that boy, in knowing what he wants, also knows how to be incredibly sweet. Yesterday he looked at the blanket my mom had knitted for T-Rexy and said to her, “I’m proud of you, JoJo.”

So, when his little fingers marked my forehead again last night and spoke the word, “beautiful” to this overly ripe pregnant lady whose full-term belly causes strangers to cringe when they pass me on the street…When he touched the ugly markings on my head and declared me just as beautiful to him as I have always been, I believed him.

On Sunday, my pastor Fred Harrell reminded us that Jesus will not transform our lives until we see him as “beautiful, not simply useful.” It’s the loving him that changes us, not the using him. I can’t help but see my son in those words. What does it mean to love Jesus—not because he my protector, or the one who forgives me, or the giver of courage to my fearful self—but because he is beautiful?

To reach my fingers up to his broken places just as Doubting Thomas was allowed, to touch his gaping wounds, look in his eyes and say, with utter sincerity, “You are beautiful.”

February 13, 2013
One Good Phrase: God loves you and so do I (Christine Gough)
Next Post

February 15, 2013 My Chalkboard: Jane Kenyon
Recent Comments
0 | Leave a Comment
Browse Our Archives
get the latest from
Family
Sign up for our newsletter
POPULAR AT PATHEOS Family
1

Family
An Invitation to be Lonely
Micha Boyett 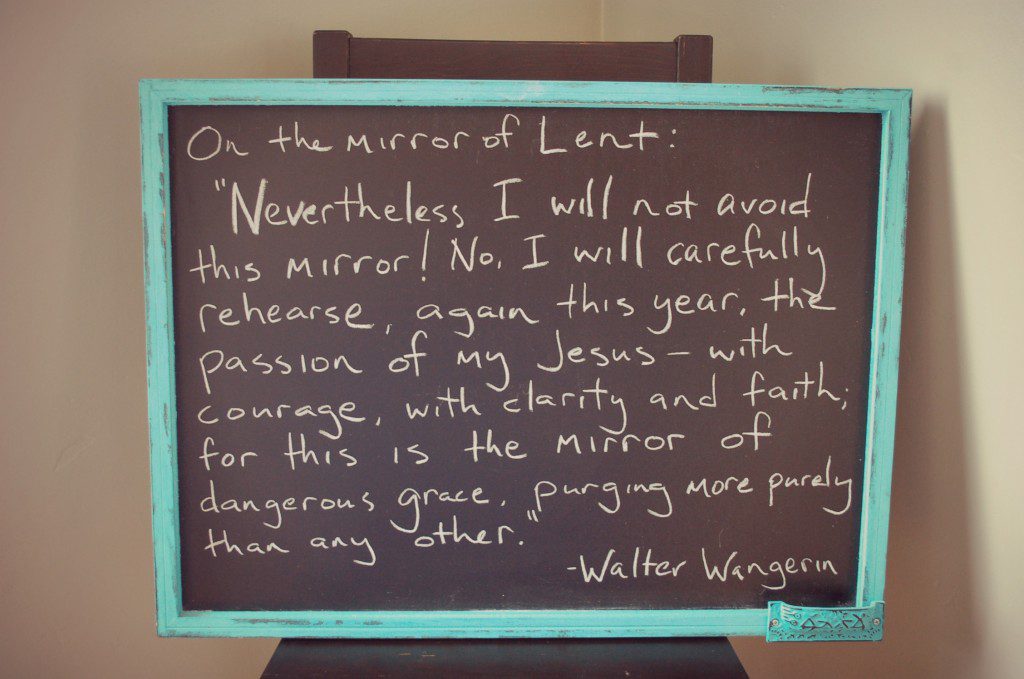 Family
My Chalkboard and all the other things...
Micha Boyett
TRENDING AT PATHEOS Family